With the Ontario Liberals rolling out their basic income pilot project to much fanfare this week, it’s an opportune time to dive into the debates around BI once again.

A few weeks ago I attended a debate on basic income and the left in Toronto hosted by The Leap. During the debate, the proponents of BI returned again and again to those who are outside the labour force. This focus is important. Welfare in Ontario and elsewhere is equivalent to poverty. And those outside the labour market are central to the current plans for basic income, which are more replacements for welfare rather than the kind of universal schemes argued for by some on the left. What BI fans forget is that even those outside the labor force have important functions under capitalism. While there was much said about people who can’t for various reasons participate in the labour market, there was scant attention to their position within our economic system.

A number, primarily women, are “outside the labour force” but performing the invisible, difficult, unpaid labour that makes the system tick: childcare, housework, non-market food production. Their work is valuable for society but needs to remain unpaid as long as it isn’t done for profit. The other part of those of working age but outside the labour force are key in a different way. They are a reminder that those of us don’t have any wealth have to work for a wage to survive…or else. John Clarke, who has been consistently critical of neoliberal BI schemes, made the point early in the debate that unemployment, poverty and homelessness have a political function in capitalism: they are part of the apparatus of economic coercion. People become examples for others: “Don’t want to end up on the streets/in dire poverty/…? Better get to work.”

Just another reason everyone should read the brilliant Polish economist Michal Kalecki’s 1943 article, “The Political Aspects of Full Employment“, which is really about the political function of unemployment. It is the clearest statement I’ve seen of how capitalism needs the unemployed and the poor, and how far-reaching any serious challenge to eliminating both is. It’s not going to be a policy band-aid but the fight of our lives. I didn’t see much engagement on the part of the pro-BI panelists at the debate (or in most of what I read defending BI) with how BI would handle, organizationally, strategically and politically, the fact that a ‘progressive’ version would be such a fundamental challenge to the basic workings of capitalism.

2 What goes out, must come in

However, unless we are talking about a very targeted, means-tested BI program, then we’re talking about a huge fight over economic resources. And if we are talking about that kind of program then that’s what the Ontario Liberals are already proposing and we don’t need fancy “basic income” branding or a pilot project that eats up three years while welfare recipients continue in poverty. We already know that giving people more money makes them less poor. Just raise the goddamn rates and stop the morality policing!

In the case of a more ambitious BI, my very rough calculations for Ontario are that even a very modest $15,000 universal, unconditional basic income for everyone would require a doubling of provincial tax revenue, even taking into account savings from less spending on policing, healthcare and so on. When is the last time we were able to extract an additional percentage point of tax revenue, nevermind a doubling? My point is not to get lost in the minutia of dollars and cents or demoralize people, but to make clear the enormity of the task and ask serious questions about strategy and organization—those to get us to a position of power to extract anything meaningful. This is especially the case in a situation where the right is advancing BI as a means to subsidize employers—with workers too weak to win wage increases subsidizing themselves with their own taxes—or to take away some of the hard-won public services that we currently get in kind.

Even if we think about BI as a redistributive mechanism, which we shouldn’t as it ignores the fundamental workings of capitalism, it is hard to see current plans as little more than getting the working class to subsidize itself rather than effect meaningful redistribution.

Proponents of BI at the debate also pointed out numerous times that BI allows workers to opt out of the labour market, to withhold their labor. They argue that this is the weapon that workers have always wielded in the face of the boss to extract gains. First, there’s the detail that existing BI proposals like the one in Ontario look to set the BI amount below the poverty line, making real, long-term opt-out from work much harder. But, more importantly, those arguing for BI on the left miss the fact that workers have won when they have withheld their labour collectively, when they have organized together.

Without collective organizing and with an insufficient BI, you are just someone with your labor power to sell and a few extra hundred dollars a month. The proposals for BI floating around now, whether in Ontario, Finland or India, are all top-down and driven by the right. If anything they will make us more atomized and less organized. They are also means-tested, still asking the question of who are the “deserving poor”? As such, they are not building broad constituencies that could defend them.

Once again, the question I have for proponents is not whether BI is or isn’t nice in abstract as policy, but how do we create the concrete politics, organizations and power to attain it.

Outside the left’s debate halls, a real world BI is gathering steam in Ontario and it’s not looking pretty. For now, the Liberals are embarking on a three-year pilot project for something that will be a replacement and consolidation of various welfare programs. Employers, including the Ontario Chamber of Commerce, are on board with it. Their vision is plainly for BI as a subsidy for low wage work; they have explicitly counterposed it to an increase in the minimum wage.

Liberal-aligned media has been predictably giving the idea a lot of free PR. The Toronto Star has put out story after story in support of BI and the Liberal proposal in particular; though, to be fair, the paper also published a surprisingly sceptical editorial, rightly calling for immediate action on welfare rates, the minimum wage and labour standards (just what the Fight for $15 and Fairness has been patiently building a grassroots, bottom-up campaign towards for years). Just today the Toronto Star ran a story headlined, “Province offers up $17,000 no-strings annual basic income”. 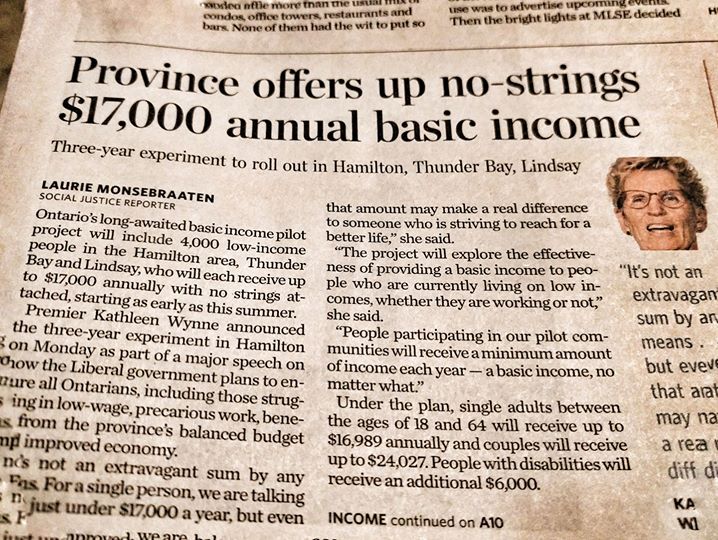 There are too many issues with the story that merit their own article, but just the headline has two glaring problems. First, the basic income amount in the pilot study will be a maximum of $17,000, which is still 25% below the poverty line, with most people in the pilot getting less. The pilot will only affect 4,000 households (compared to over 500,000 cases currently for Ontario Works and ODSP combined) and allow the government to leave already criminally-low welfare rates stagnant for another three years. Second, this is not a no-strings program. Any wages made in excess of the basic income amount will be clawed back at a 50% rate (hence workers subsidizing themselves). There is no pretension to universality on the part of the Liberals with their policy; this is a rationalization of welfare.

People are rightly fed up with poverty, low wages and growing inequality. The Ontario Liberals, like increasing numbers of politicians across the world, are adroitly exploiting these fears to push policy proposals that sound like a lot and do very little.

Let’s not be fooled again. The Ontario Liberals have used our own slogans against us in the past many times. See, for instance, how they commandeered “free tuition” in their last budget. What ended up to be little more than a rationalization of grants into one program was trumpeted as a progressive breakthrough. There are similar, very serious flaws with the basic income proposals being drafted and implemented by the Ontario Liberals and other right-wingers across the world. We need to be vigilant, have a clear idea of the enormity of the task ahead, and get organized rather than waiting for top-down policy to do the work of bottom-up politics.