Two very different provincial governments tabled their budgets this week. The freshly-elected BC Liberals and the seemingly election-ready Parti Quebecois both delivered what they termed “responsible” budgets. While the two governments identify with opposing ends of the political spectrum and face distinct political climates, these differences did not prevent their budgets from displaying some eerie similarities. Since these budgets tell the same stories, they are laying the ground for a common response.

Although the BC and Quebec economies are often regarded as moving in opposite directions, their economic performance in the five years since the financial crisis has been quite similar. Both provinces have seen real GDP grown by just under 5% over this period. In fact, Quebec’s per-capita GDP has grown at by twice as much as BC’s over the same period. To be sure, there are structural differences between the two provinces, with slightly higher unemployment in Quebec (albeit with greater labour force participation) as well as a more generous regime of social programs and higher taxes to fund them. One outcome of this, however, is that Montreal does not face the same crisis of affordability that afflicts other major centres like Toronto and Vancouver.

Strategically, the BC and Quebec budgets play very different roles for the two parties that put them forward. For the BC Liberals, the 2014 budget is a victory lap. After their shock defeat of the NDP in last year’s provincial election, the party is looking forward to over three more years of majority rule. This budget is at once a tip of the hat to its right-wing base and a signal to centrist voters (who may have waffled in their choice or switched last minute from the NDP) that they ended up backing the right horse. In the words of BC’s Finance Minister, “balanced” for the base and “boring” for the middle.

Unlike the BC budget presented by a majority, right-wing government emboldened by a come-from-behind victory, the Quebec budget is likely to be the last tabled by a minority, nominally left-wing government that is, by all accounts, likely to call an election before the budget is even put to a vote.  The “responsibility” here is, however, also aimed in large part at the same mythical middle-of-the-road voters. This “mushy middle” election strategy is in many ways an ideological device that helps keep out real alternatives. Behind the strategic differences, the BC and Quebec budgets share some uncanny substantial similarities. 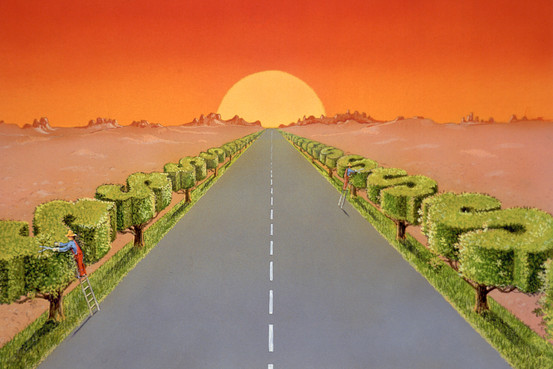 For both the PQ and the BC Liberals, the road to riches is paved with natural resources. To its credit, the Quebec government recently enacted a moratorium on fracking for shale gas exploration and extraction; in BC, the practice is fair game and seen as instrumental to tapping resources trapped under large swathes of the province. BC’s premier has touted a veritable LNG miracle that will guarantee decades of prosperity and the 2014 budget is the supposed first step towards making it a reality. Today, however, this means a feeble tax plan and some money for industry development: government aid for setting up operations and a hands-off attitude towards profits.

Despite its fracking ban, Quebec, like BC, is pinning its hopes on resources. Oil is at the top of the list with increases in forestry activity also planned. Tax credits, giveaways and other incentives are to be highest in the regions of the province most heavily involved in resource extraction. The forecast growth in jobs is nowhere near as generous with all incentive programs leading to investment that will produce 2500 direct jobs.

The promised natural resource bonanza, even if it does materialize at least in part, is still a long ways off. Marc Lee of the Centre for Policy Alternatives has shown just how fragile the estimates of future earnings are and how sensitive they are changes in world commodity prices. Rough calculations indicate that tax revenues could be roughly less than a third lower given a quarter reduction in LNG prices from their current, historic and likely inflated highs. While the reality will at best be record low royalties and high profits, large contributions to climate change and few jobs (increasingly sourced through the exploitative Temporary Foreign Worker program), both governments are playing up the vision of an easy, widely-shared prosperity.

This wonderful future, however, demands present sacrifice – yet for the time being, budgetary “responsibility” is falling disproportionately on those with lower and middle incomes. This is happening through two mechanisms: an increase in regressive taxation measures and cutbacks in public program spending. In BC, fixed-sum health insurance premiums, paid in the same amount by everyone but those on the very lowest incomes, are going up by 4%; they have doubled since 2000. At the same time, program spending is falling as a percentage of GDP and is projected to continue to fall.

While the Quebec government has been throwing out spending announcements in typical election campaign mode, the bottom line there is the same: program expenditures are being capped at 2% cap for the next three years. This means that Quebec too will see spending fall as a percentage of GDP given projections. And similarly to BC, fees too are rising. The most notable example in this budget is daycare, whose cost will rise from $7 per child per day to $9 per child per day over two years, leaving families with children on the hook for an extra $500 annually regardless of income.

Both budgets outlined here are characterized by wishful thinking about future riches to sell present pain that translates into cutbacks and tax increases that fall disproportionately on the working and middle classes. What’s more, the locked-in logic of balanced budgets and reduced spending lays the groundwork for today’s austerity-lite becoming the real deal if the promised bonanzas do not materialize or political conditions become ripe for greater redistribution. This is only reinforced by political forces across the country that jostle for that mythical fiscally-responsible middle that they themselves help reproduce.

The comparisons laid out here are not a mere analytical nicety; they demonstrate the deep threads of dreams laid and hopes dashed that run across this country from coast to coast. Our hopes for solutions to crises in education, housing, child poverty, the environment and more are being papered over by the chimera of easy riches to be made from the ground right under our feet. While there is much local specificity, there is clear room for broad links that span the country. The odd mix of budgetary carrots and sticks – promises for the future at the cost of present pain – highlight that countering ecological and socio-economic disasters is a common project. While resource dreams are just deferred climate change nightmares, regressive fiscal policies can be challenged, reversed to become opportunities for real well-being in the present.

One thought on “Selling prosperity in a time of austerity: Budget days in BC and Quebec”