One way to think about climate activism is to see if it focuses on the supply of or demand for fossil fuels – pipelines or cars, hydrocarbons or carbon emissions. This distinction is not a new one, is doubtless very simplistic and has often been used to chastise activists. Here, I hope it will draw out some potentially useful thoughts that centre on the aims of activism and the idea of risk.

In an article published yesterday in The Nation, Chris Hayes makes an interesting analogy between the struggle for climate justice and abolitionism: despite numerous differences, both assume the destruction of potential future income streams – abolition by freeing slaves, climate justice by leaving fossil fuels in the ground. The weak link that climate activism can exploit is the capital-intensiveness of fossil fuel extraction. This is a re-framing of the supply side of the story.

Enormous capital investments, like the Keystone XL or Northern Gateway pipelines, make for large targets. There is construction equipment to block, land to occupy and a regulatory process to stall – and, as yesterday, First Nations across Canada and the US have been taking the lead on all of these. Other than physically stopping these large investments, such activism could in theory increase their already-sizeable costs to prohibitive levels.

These concerns brought to mind some seemingly very different thoughts from Maclean’s. There, Andrew Leach argues that the demand side of these large projects is far more significant economically:

Oil sands producers and the Alberta government are quick to tell you that up to 80% of the life-cycle emissions from oil sands occur from refining and combustion, not from extraction and upgrading.  That’s comforting, until you consider that this means that most of the carbon policy exposure for these projects comes from emissions-control policies and innovations far beyond the jurisdictions and markets in which oil sands companies operate…So, if you want to know where the risks to oil sand projects lie, they aren’t from the policies which are being considered for production emissions in Canada.

The above examples stand in for two distinct perspectives on the economics of climate activism. The first sees concentrated masses of capital, the second dispersed masses of emissions. Correspondingly, the threat to fossil fuel development Hayes focuses on is divestment, while Leach highlights carbon pricing and emissions control schemes.

On the other hand, there are, of course, plenty of links between the views – this is no simple dichotomy. One means to link the two is the notion of risk.

While both views mention it, the demand picture gives more weight to the “carbon bubble” argument, which re-conceptualizes fossil fuels still in the ground as “stranded assets”. The argument is that the economic benefits of large-scale and long-term infrastructure are currently calculated to be far too high because they do not factor in the cost of future climate change policies, for example those that would regulate emissions to levels in line with a rise in global temperatures no greater than two degrees Celsius. Call this policy risk. It is based on future events reflected in current resource prices.

The supply picture on the other hand, tries to impact on the cost of investments directly. The risk is to corporations that their projects will not be completed and to activists that they may be harmed. Call this physical risk. It is based on present events and hopes to impact future resource prices. 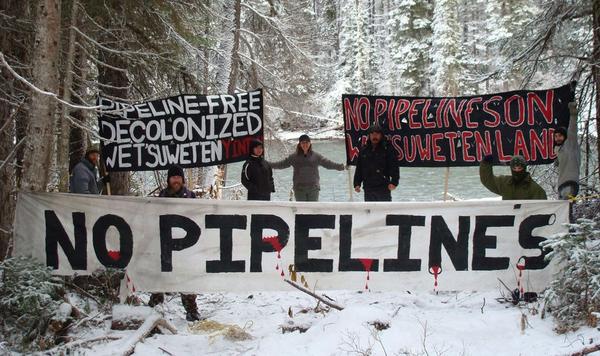 Arguments that the demand side takes priority have long been aired and surely will come out again in response to Hayes’s “abolitionist” call. These arguments claim that as long as there is demand, supply will find a way to meet it. They have been countered by those who reject this one-way-only determinism. Divestment is one means of doing so as its aim is ultimately to make firms unable to meet demand through reduced capacity. The corollary is that demand for hydrocarbons is rising anyhow, even if the rate may be falling here and there.

There are also other reasons to include supply-side tactics, from symbolic importance to building communities that sustain broader struggles. The (re)distribution of risk belongs to this latter group of reasons.

Policy risk is well in line with the dominant trend towards greater financialization.[1] It is a market solution, albeit one that says nothing about whether those future policies will be market-based.

Physical risk, in a way, works against the financialization trend focused on calculations of future risk. The risk in the here-and-now is a people’s solution that does not simply throw more markets at a problem generated by the market system. Leach makes an excellent point – there are few comparatively risks in production. Physical risk is a corrective – one that redistributes risks, from the future into the present, from society at large to committed groups of people, from tomorrow’s capital projects to today’s holes in the ground. Climate justice is surely about the future but it needs a firm anchor in the present.

[1] Indeed, financialization has already had significant impacts on how much risk and what kinds of risks are included in commodity prices. Even the Bank of Canada has changed the way it forecasts the price of oil, moving from using the futures price – which would seem natural as it is supposed to reflect the future price – to the current spot price. This reflects the effects of financialization on commodity prices and the use of these prices to hedge against other, unrelated risks by large investors.

2 replies on “What’s the risk? Climate activism aiming at supply and demand”

When ideology like this isn’t entirely self-serving it is overly simplistic, which is why economists tend to be worthless at crafting effective policy.

We also need “big government” investment in mass transit and high-speed internet to reduce emissions in the transportation sector.

A good supply-side target activists can focus on is foreign investment. That tar sands will require a lot of capital to triple development on schedule. So by beating the anti-Chinese foreign investment drum, they will do a lot to derail Alberta’s plans.

People should also take note that Justin Trudeau’s main economic platform is exporting raw resources to Asia. He also criticized Harper for putting limits on Chinese foreign investment. His idea of “hard work” is removing barriers to getting Canada’s resources to market.

The following link has a transcript of Trudeau’s speech to Vancouver’s Board of Trade: