Much ado about deficits

A deficit, which occurs when a government spends more than it takes in within a given year, is inherently neither good nor bad.

Deficit spending has long been a tool to deal with economic downturns or invest in the economy — whether usefully on, for example, schools and trains, or wastefully on something like the military.

The Conservatives have never seen a social problem that couldn’t be solved with a new tax credit.

Beyond this, however, deficits can be politicized and governments that run them can be disciplined by financial markets. In an advanced economy like Canada’s, though, government debt plays an important role as a stable means of absorbing private savings and regulating capital flows.

In addition to who’s running a deficit, the economic situation also matters. 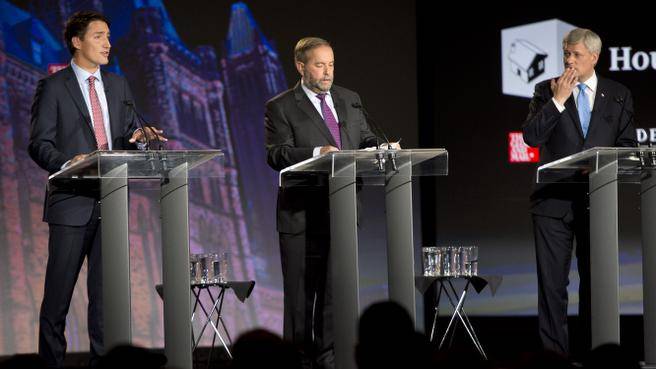 Any new Canadian government will face a low federal debt (as a percentage of GDP), record low interest rates and sound credit ratings. It will also inherit a stagnant economy, along with stagnant incomes for most working people.

In this context, deficit spending makes sense, so how can we push the barriers to it?

The parliamentary budget officer has found that the government could go into deficit by around $29 billion per year without raising the debt ratio.

But the anti-austerity “debate” has the Liberals posturing cynically and the NDP maintaining an approach of “responsibility at all costs,” and working people have lost ground and cannot push a different agenda.

To some extent the debate is academic. In the long term, two decades of Liberal and Conservative austerity have left Canada with a revenue problem, rather than a spending problem.

As the Broadbent Institute points out, if the federal government took in as much revenue relative to the economy as it did a decade ago (when taxes were already low), it would have an additional $41 billion to spend per year. This is what it means to have a revenue problem.

There is a big gap between the government’s falling revenues and the increasing needs generated by stagnating wages, persistent poverty and rising inequality.

Spending cuts and freezes are one way to fill such a gap, and they have been the preferred method so far. Raising taxes and running deficits, of course, are two other candidates.

While Stephen Harper has doubled down on the Conservative legacy of slow but steady tax and spending cuts, the opposition parties have pledged to reverse some of both.

Most of the tax debate has focused on business, which has seen the greatest tax reductions. The NDP is promising to raise corporate taxes from the current low of 15 per cent to 17 per cent, still below the G7 average of 19 per cent. Each percentage point is forecast to raise $1.8 billion per year. The NDP (like the Conservatives) also says it will lower taxes on small businesses from 11 per cent to 9 per cent.

The Liberals support this measure, at the same time criticizing a blanket cut as playing into the hands of the wealthy, some of whom use “small businesses” as tax shelters.

The major personal income tax change has been the Liberal promise to raise taxes slightly on the wealthiest to pay for lowering them slightly on the upper middle class. In addition, both the Liberals and the NDP plan to scrap income splitting for families, which should return around $2 billion in revenues.

As is clear by now, the tax policy proposals are drops in the bucket when it comes to reversing decades of steady, “starve the beast” cuts.

In terms of social spending, the Conservatives have never seen a social problem that couldn’t be solved with a new tax credit.

Seniors in poverty? Single senior tax credit. Unaffordable housing? Home renovation tax credit. These are all band-aid solutions that do nothing to solve the underlying problems rooted in more of society’s wealth going to the top.

In addition, many of these tax credits are non-refundable, which means they additionally favour the wealthy who have the high incomes that allow them to take full advantage of these rebates.

The Liberals have also caught the tax credit bug, proposing to address cash-starved education systems through a tax credit for teachers who buy supplies out of pocket.

The politics of responsibility that characterized the Third Way of Tony Blair and Bill Clinton is increasingly being rejected.

Unlike the Conservatives and the Liberals, the NDP has promised a large new government-funded social program: national $15-per-day daycare. Here, the NDP is making the biggest break out of the austerity straightjacket. Turning childcare into a guaranteed social benefit and taking it at least partly off the market signals that we value it as a society and we stand ready to take care of each other.

The other big spending plank, shared by all parties, has been infrastructure. Each party has offered billions more over the next few years to repair and build roads, school, transit systems and more.

The promises, however, need scrutiny. How much of the funding has been previously announced? How much of it is back-loaded years down the line? And how much will be pushed into so-called public-private partnerships (P3s)? While favoured by both Liberals and Conservatives, P3s are often more costly for the public and guarantee profits to corporations for what could otherwise be fully public-owned objects.

Ignition for a different economy

It’s clear most people don’t subscribe to Harper’s big money agenda. The problem is that the opposition has not been able to get out of the track laid over the past decades.

The campaign has centred on the Conservatives versus the others. Canada has not seen the political polarization between an ever-more comfortable elite and the rest that has slowly occurred across Europe, including the United Kingdom with Jeremy Corbyn’s takeover of the Labour Party leadership, and even the United States with the nascent Bernie Sanders campaign. The politics of responsibility that characterized the Third Way of Tony Blair and Bill Clinton is increasingly being rejected even in the English-speaking North.

The economy isn’t controlled from Parliament, but governments can create room for a counterbalance to the power of money. Government can be a lever for working people to get some breathing space. The potential for positive change is great: there are no-brainers like massive green investment in transit or a fully public childcare system, which would also provide good jobs.

However, changing the balance in favour of people and the environment rather than big money will require taking on elites and their vested interests. It makes a difference whether we produce more oil and cars, or more trams and more wind turbines, but above all the immediate question is about how we can produce goods and services that not only meet the needs of society, but empower working people.

Today’s economic debate will likely stay in a rut well worn by decades of right-wing austerity and its victory in the sphere of ideas. At the same time, inequality and stagnation have created fertile ground to spark new ideas. Who will ignite them?