This is because housing both plays many roles in our social and economic life, and because of its recent history. Housing has been particularly important to the economic transformations of the second half of the 20th century.

Housing is first shelter: to the more hard-nosed “a stream of services” or, equally true, a human right. But it is also a store of wealth and a source of community and identification. As any real estate agent will tell you, it’s all about “location, location, location!” This last role in building communities means that housing is both implicated in a wide array of social processes—education, health, urban planning, and many more—as well as also used for group formation. This is most explicit in the ways it is possible to excluding unwanted others from neighbourhoods through pricing out, capturing planning regulation or other less explicit means.

Then there is the role that housing has played in both the transformation of working class political economy in the past half-century or so, and, more recently, its role in an era of widespread asset-price inflation and low investment. 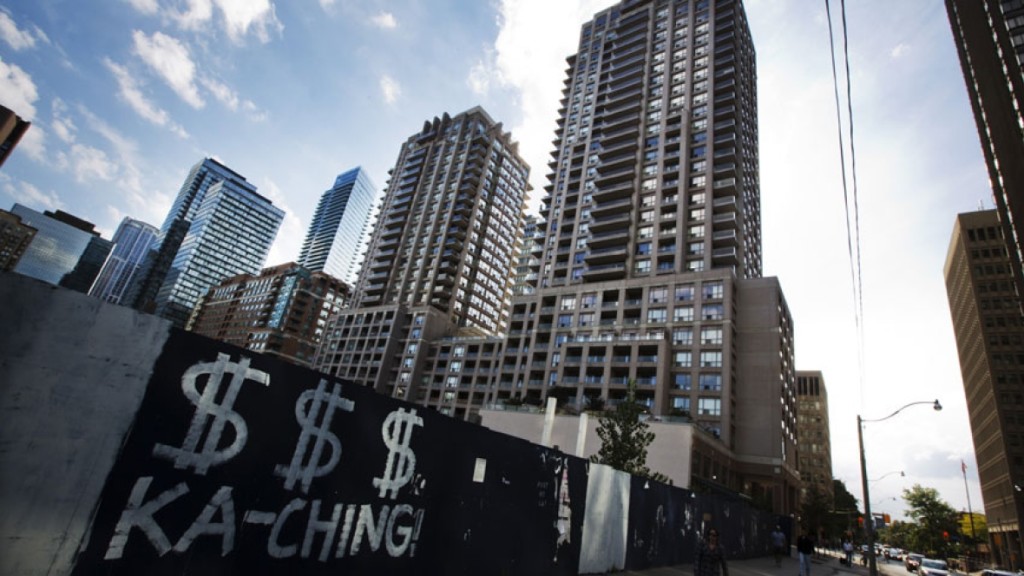 Housing has been one of the main means to integrate workers into financial circuits and into a dependence on the health of financial markets. The means have been the mortgage, the home equity loan and even the investment fund (mutual, RRSP, 401k) that invests in securitized housing loans. The ownership society is also the society scared for the value of its investments.

In the last decades of deepening inequality and wage stagnation, housing has also been a means of leveraging working class assets to boost consumption—and indebtedness. Just more recently still, increasing housing supply in large cities has been a boon for investors around the globe searching for yield in a world overflowing with liquidity. Investment in housing is an effective means of realizing (low-tax!) capital gains in the short- and medium-term—especially when the demand for investable funds from productive activity pales in comparison to the supply of crisis-averting liquidity.

So, while housing is not some kind of simple Veblen/status good (the demand for which goes up with price), it certainly doesn’t seem to follow the simple ECON 101 market logic. (Few things do as most markets don’t have pure price-takers, but this is something which seems especially the case with housing today today).

This means that, in short, whether housing is private or public matters, that city planning matters, that financing matters. All these things that are obviously not completely separate from, but not quite the same as, “supply and demand matter.” And who knows at this point which matters more. In short, we need to agitate for more housing, but a different type of housing too!

The short answer is massive new public investment in housing that is democratic, affordable and sustainable. This is easier to say than it is to flesh out. At least new public investment is on the table today. The scale is far off from what would be needed to create mass affordable housing and the catch-all “infrastructure” today usually means better bridges, ports and other amenities for business, but that makes this just the right degree of utopian: feasible yet definitely a bit out there today.

Start immediately with what was the height of public funding for public housing, including co-operatives in inflation-adjusted terms in the 20th century. Use that maximum as a reference point and get to it 5 or 10 years with the aim of surpassing it. For too long we have been reactive about what to save; it is time to demand more, to stretch the boundaries even if the Very Serious say it is far too much.

This new public funding should be used to build a mix of co-op and rental housing. One of the most important tasks would be to use the new public investment to democratize the new housing even as it is being planned and built. Plan large-scale (nation-wide) and involve people at every level down to the local as much as possible. So, for example, involve future tenants before construction begins in everything down to living space design and building amenities. Create representative citizens assemblies at neighbourhood levels to help with neighbourhood planning and zoning.

To facilitate greater inclusion and less NIMBYism, some planning bodies should cut across existing income divides. Housing itself should be mixed with some income-restricted and subsidized units but spread roughly evenly throughout cities and towns. Policies set by elected boards or some other democratic structures with broad representation from across communities could break down barriers (people will act differently if they know people from “this” area will also be involved in dictating conditions in “their” area).

The skeltons of community bodies already exist in school parent councils, hospital boards and others; they may be dormant but communities can come alive if given power. Finally, designate as much public housing as possible as co-ops that are self-managed—and even where that isn’t the case, try to democratize building management. Many of these ideas are already partly in place elsewhere with “Red” Vienna one of the best examples.

In some areas, we could establish something like community land trusts; this is number two on a list of three things from an article by Jesse Myerson doing similar utopian thinking. In short, give trusts governed at least partly by residents ownership of abandoned or state land and let them decide what to build and lease back to community members, building equity for further investment as a community flourishes.

An important legal step would be to bolster and standardize tenancy laws to reflect at least minimum standards. These would apply for public and private rental stock with the hope that stronger, higher standards in the public sector combined with more housing would push standards across the board. Another legal measure, especially applicable to places like Vancouver, would be campaign finance reform to get developer money out of politics.

Finally, there is the key point of funding. A massive build-out of public housing would need to most likely be financed by some combo of new debt and new taxes. One step would be to think about taxing land. We are quite bad at taxing wealth, but land might be among the easier to tax as it is immobile. It can’t leave your country like a factory.

A long proposed measure is a land value tax that tries to claw back the rents associated with the location of land rather than a percentage of the assessed value of the buildings on it. The better the land (a busy intersection for instance), the higher the economic “rent” (the benefits owing simply to good location), the higher the tax. More generally, taxing wealth, income and consumption at higher levels to some degree would also be needed. Technical proposals for how to do any of these abound.

If new public debt was necessary needed as it likely would be, the question is whether to would be special bonds or come out of general government revenue? Special bonds could for example have various preferential clauses for people or organizations in given communities where building was happening. If there is something our world doesn’t lack, it is specialists in financial innovation! (Not that we need more of them; moving housing increasingly out of the realm of speculation should work to help with that.) More importantly, funding would have to be integrated with guarantees for funding for local social services, education and health chief among them.

The task is making communities not just building housing—building communities we cam afford that are themselves more affordable, more democratic and more liveable.

One reply on “The housing problem is the housing market, but it can be solved”

[…] That some working-class families have won the property value lottery during the boom is no mitigating factor; it only means many now have to choose between enjoying a more secure retirement or staying rooted in their communities. Like free higher education, affordable housing could be central to rebuilding the kind of working class and youth coalition that is propelling Sanders in the United States and Jeremy Corbyn in the United Kingdom. It too is an opportunity to ask for more: not just more public housing to make homes affordable again, but better housing with more citizen input in everything from design to management to urban space. One of the authors recently summarized a range of attainable ideas. […]