One of the clearest memories I have from my only trip to Norway is the repeated failures at hitching a ride. What appeared to be an unbroken string of brand new Audi’s and BMW’s whizzed by my friend and I, dirty and sweaty after a few days hiking and camping in the mountains. “Where am I that the comforts of our rich assholes are the rights of common citizens?”, I remember thinking.

You’ve probably seen at least one article saying that Alberta should be more like Norway. I don’t want to rehash that debate. But I think we’ve gone about it the wrong way and seeing why can tell us a lot about today’s sparring over the Leap Manifesto.

Comparing Alberta unfavourably to Norway for squandering its oil wealth has been a familiar trope of media and progressive organizations, especially since the oil price crash (here’s just the CBC, Toronto Star and Globe and Mail). The comparison has become so ubiquitous that it has also spawned a cottage industry of counter–arguments from the right too. In short, Norway has been putting away the money it gets from oil in a sovereign wealth fund since 1990. The fund is now the world’s largest and worth over $1 trillion. Alberta’s fund, although older and actually the inspiration for Norway’s, is a paltry $15 billion. (Norway and Alberta have similar populations.)

The funny thing, however, is that Norway’s gigantic fund doesn’t pay for much of what the government does. Taxes do that. Take a look at the numbers. Public revenues in Norway at all levels of government are equal to over half of GDP (nearly 55% in 2014). Meanwhile, federal, provincial and local government revenues in Alberta make up somewhere around 30% of provincial GDP. That’s a massive difference. Alberta tax rates are lower: on individuals, on corporations and on consumption. In addition, the Norwegian government not only owns a majority share in its largest oil company, Statoil, but also taxes oil profits at a much higher rate. A special tax on “excess profits” takes the top marginal corporate rate on oil corporations to 78%.

So while Alberta has been using up its resource revenues to pad it’s low-tax budgets for years, Norway has been able to squirrel them away. The oil price crash has caused Norway to dip into the fund substantially for the first time, taking out more than it is putting in this year. The fund is there to patch up temporary holes. Alberta, on the other hand, will be patching its budget with low-interest debt—still a decent short-term option given the severity of the oil price crash, but one that reflects its structural weaknesses.

Critics on the right are correct to point out that comparing Alberta to Norway is in some sense unfair because it’s a much bigger issue than just what to do with oil profits today or tomorrow. It’s a host of decades-long historical differences that have produced the “Texas of the North” on one hand and one of the few dim beacons of social democracy left on the other. And it’s all the worse for Alberta, especially if the fossil fuel era truly ends quickly, or even just if oil prices stay low. 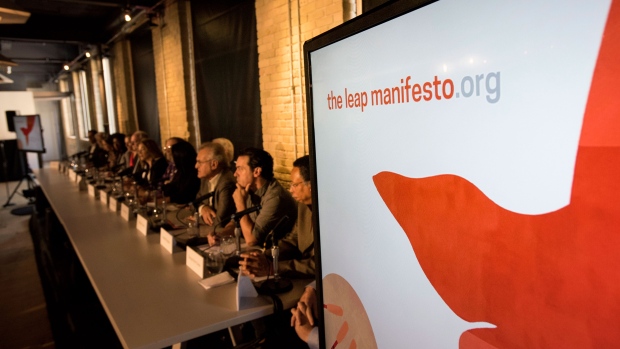 This where the debate over the Leap Manifesto comes in. Norway’s example gives all the more reason for Alberta to pursue the goals of green transition and moderate social democracy contained in the Leap Manifesto, rather than fight them. Today’s fossil fuel bust shows how bare the cupboards are after decades of relying on fossil fuel bonanzas.

Norway also shouldn’t be an example that Alberta’s Leap-fighting NDP might imagine aspiring to. In fact, Norway is simply one of the last hold-outs of social democracy, which has been slowly withering around the globe for decades. So while Norway still has among the lowest measures of inequality and poverty in the OECD (Canada is around average), over the past several decades Norwegian governments have relied on wage restraint and inflation control to “maintain competitiveness” in the same way as other countries. The neoliberal revolution that took off globally in the 1980s has not spared Norway, it just hasn’t been as harsh. Oil has only cushioned the blows.

Norway’s oil wealth fund is a lesson from the past. If there’s anything Norway has to teach us for the future, it’s that we cannot rely on oil to pay for what we need. What both Norway and Alberta will have to figure out is not only how to make a transition away from fossil fuel extraction quickly but how to create the conditions for any kind of left alternative. At the same time, the left will have to figure out how to remake itself as social democracy remains on the back foot globally, under attack nearly everywhere.

In this sense, the urgency and categorical language of the Leap Manifesto are right. The alternative proposed by the Leap can, however, also take lesson from Norway, although not the one we are used to hearing. Norway’s past offers the lesson of intense social struggles to get the change we need. The labour movements that brought the world’s strongest social democratic regimes into power across Scandinavia are as good an example as any. Taking on the fossil fuel industry will require movements and popular struggle on a scale that the Leap doesn’t fully acknowledge. Questions of who will pay for the transition, how we can transform public services in the process, and how the good and the bad will be distributed are not apolitical in any sense, as the Leap’s leaders sometimes claim to be.

The Leap Manifesto should also be up for honest debate on the left. To some, like me, it unnecessarily gives its green hues a localist, NIMBYish tint. Is it “out-of-control industrial activity” that is at fault—or the type of industrial activity and how its benefits are distributed? Take just the example of renewable energy. Windmills are high-tech, industrial products. And they have to be built somewhere, their parts have to be manufactured somewhere, and the metals that go into them mined somewhere too. While the Alberta NDP is using cynical hippie-punching appeals and blue collar sentimentalism against the Leap, a green argument for better, more equally distributed fruits of industry would be well placed to cut off both these and arguments from the right. Like this.

The debate over the Leap Manifesto is a good thing. The Manifesto is exposing political divides and putting some questions into sharper relief. It, however, should be even more of a political exercise than some of its backers maintain. More debate, more politics from the bottom up and the right lessons from elsewhere could take us far on the road to radically different economy.