Black Friday may be a fitting day to start a blog on political economy. A day of extreme consumerism, a “working holiday” for many in the service sector, an outlet for anger and violence played out across store aisles and parking lots. At the same time, also increasingly a day of protest, of working people ready to say “enough!” even in the face of serious repercussions. It is a day when the global capitalist economy shows a bit more of its true face. This is the much-vaunted Western consumer, often poor and in debt, racing to buy the baubles produced in the global South by her even poorer counterparts…so that the profit engine can keep churning, GDP can keep growing and those like the Waltons can keep lining their pockets.

I was motived to write this blog entry after seeing too many news stories, images, Facebook posts and conversations of the “look at these stupid poor people trampling each other” variety. Today is an easy day to be smug. Sure, people don’t have to trample and fight with each other over trinkets.

trinket[noun]: any object of consumption outside all but the most basic of life necessities, today mostly high technology goods; see also bauble

No one is forcing them to. And yes, it does make people look crazy, silly and downright scary at times.

Yet in a society that teaches us to value each other according to the things we own, events like Black Friday are simply another thread in the web of oppression. They are oppressive because there is limited choice involved, at least for the poor. The rich don’t have to participate. They can buy the things they want, when they want, where they want, often without even interacting with those outside their class except at the cash register. In a society based on cycles of endless consumption, they are consumers just like the rest of us. Indeed luxury firms make it easy for them: who knows whether is a Civic is better than an Accord, but it’s easy to tell that a BMW 750 is better than a BMW 530. 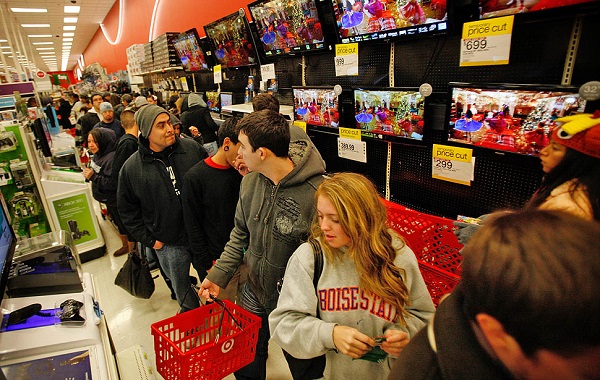 What makes Black Friday particularly pernicious is that the things by which we are taught to in part judge our value as human beings, but which are largely out of reach, become for a short moment slightly more attainable. The fact that Black Friday bargains are not really bargains (prices are managed throughout the year to ensure good returns for retailers with their final “discounts” already built into higher initial pricing) is irrelevant. Black Friday plays into our most basic human needs for being valued, for getting respect. Paradoxically, of course, the pathway to value for those whose bank accounts are not large enough is paved with waiting in the freezing cold at strip mall parking lots, running like mad through store aisles and the odd fistfight over a Playstation. Even if the latest tablet, plasma TV, gaming console, designer outfit or pair of shoes will not make us any better as people, much of our culture tells us the opposite. The upper classes in our society are who they are in virtue of being rich, of owning lots of things. Every developed human society has had a hierarchy and in every one those at the top of hierarchy have had more things. Our society, however, is the one where everyone is taught that those at the top are there because they are rich. Not because they are chivalrous, not because they have some special connection with the gods, but because they have stuff.

What are the rest of us to do then, when huge piles of stuff are, as if magically, more available? It is easy for those in the upper sections of the income distribution to answer self-rightously, to make Facebook memes decrying Walmart stampedes as the end of civilization. Just another kick in the pants for the poor. Surely they are the reason our civilization is falling apart…not the owners of capital who are ruining the planet, squeezing workers and attacking the few social goods we have left in the name of never-ending growth.

Of course, we have agency and we can stand up against the consumerist hogwash that is Black Friday. And many of us, poor or middle-class, do. We should be able to acknowledge, however, that doing so, is not easy. So rather than criticize others for doing what our society indeed promotes and encourages as normal, we should be resisting productively. Whether this means standing in solidarity with workers fighting for their rights in the retail sector, joining in struggles to base society on something other than consumption in the name of capitalist growth, actively counteracting poverty-bashing stereotypes or simply abstaining from the consumer circus. If Black Friday looks and feels like a circus, then maybe that’s because it is in some ways a continuation of that noble Roman tradition. The rich still look on and snicker. Only today, the rest of us fight amongst piles of trinkets thrown into big-box coliseums, hoping for that illusory freedom of a slightly bigger personal pile of things.

2 replies on “Notes on Black Friday”

This is just a side point, but re the comment that in all human societies those at the top of the hierarchy have more: there is an interesting dynamic in traditional potlatching societies where rank is marked by how much you can give away, and those with the highest rank actually end up with the fewest possessions – temporarily, until the next potlatch. I don’t know that this has any implications for your larger argument but I just think it’s interesting to challenge our ideas of what is a necessary component of human society!

Yes, that’s an interesting point. I wrote something on tax policy recently where I used the potlatch as an example of an institutionalized form of redistribution from the top down. Of course, the rub is that the powerful could give away so much precisely because they had the power to obtain it on the first place. I think you’re right to bring this up and I didn’t want to suggest that power or prestige are in some way essentially tied to possession in human society. Organized nomadic societies also have, for example, a smaller link between the two by virtue of the fact that they can only travel with so much. The problem is that the powerful in most human societies have used their power to accumulate goods. Capitalism with its specific value relations that set no bounds on the process of accumulation has revealed this to be problematic to the extent of threatening our survival as a species.