Most developed economies continue to experience fall-out from the financial crisis of 2007-8. The Eurozone has been most ravaged, but the US and UK have not fared much better.  After the initial rebound from the most severe crisis, growth in many economies has been decelerating to the point that some are once again contracting in real terms.  At the same time, unemployment remains high – hitting record levels among youth in Europe for example – real incomes are flat for the vast majority, inequality is on the rise and austerity programs targeted at social services are eating further into living standards.

Canada has partly bucked these trends.  While the overall growth rate has not returned to pre-crisis levels, it has not done nearly as poorly as that in Europe or even the US.  Other measures of economic well-being do not suggest the level of alarm felt in harder-hit economies.  To give two examples, the Canadian unemployment rate has grown relatively modestly and the distribution of gains since the crisis has not been skewed towards the very top to the extreme that it has been in the US and elsewhere.  The financial press is increasingly optimistic – just this past week cheering newly-released above-forecast quarterly growth figures – and the Conservative government remains steadfast in touting our supposed economic prudence and resilience.

Finally, but not least, Canadian corporations also have had it relatively good since the crisis.  Other than a sharp dip around 2008, profits have remained high and growing. 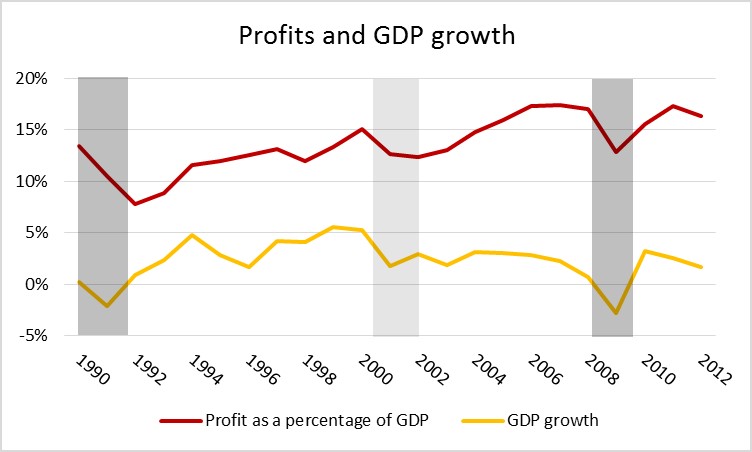 Figure 1. Profit as a percentage of GDP and nominal GDP growth.  Dark grey bands mark the last two recessions and the lighter band marks the bursting of the dot-com bubble.  Source: Statistics Canada.

Measured as a percentage of GDP, profit quickly returned to pre-crisis levels, which themselves were higher than anytime over the past two decades. 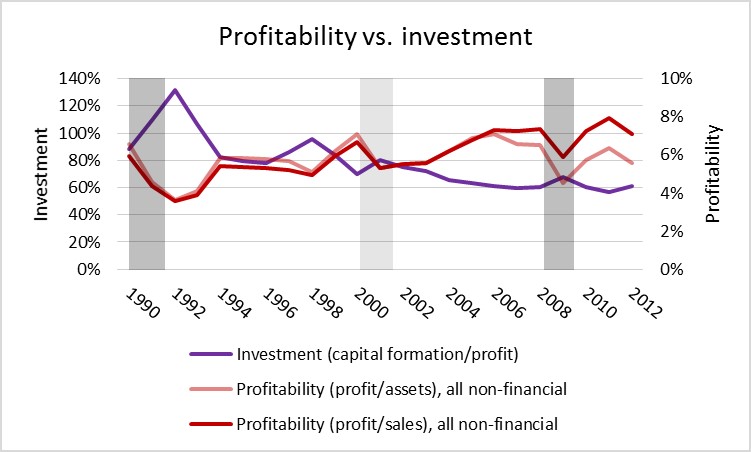 Figure 2.  Two measures of profitability (right axis) and the ratio of investment to operating profit (left axis).  Profit Is operating profit for all measures.  Dark grey bands mark the last two recessions and the lighter band marks the bursting of the dot-com bubble.  Source: Statistics Canada and OECD.

Profitability has similarly recovered, though here the extent varies based on the measure of profitability.  Gross profit margins (operating profit divided by sales) have recovered fully.  The relatively smaller recovery in returns on assets (operating profit divided by assets) likely reflects the continuing expansion of asset values – a point I will return to shortly.  The continuing high profitability of Canadian companies contrasts sharply with the other developed economies where profitability has not rebounded to pre-crisis levels and remains depressed.

The third measure in Figure 2, however, shows something completely different: the ratio of investment to profits has been falling steadily for the past two decades and now sits at just above 60%.  Companies are putting less and less of their earnings back into their stock of buildings, machinery and other equipment – the tools they use to produce goods and services.  For every dollar earned before tax, only about 60 cents goes back into maintaining and expanding business capital.  Compare this to 80 or more cents just a decade ago.  Take additionally into account the fact that corporate taxes have been cut steadily across Canada for the past two decades – Unifor’s Jim Stanford recently highlighted some of the same trends in Canadian business investment, arguing for the failure of the deep corporate tax cuts to deliver on their promise of boosting investment – and there emerges a picture of a serious investment crisis.

Here, finally, is something Canada shares with other economies that have experienced greater fallout from the financial crisis: sustained falling investment.  This is Canada’s profitability puzzle.  Our economy has managed to escape the deeper slump suffered by many other developed countries, especially in terms of profit, but also output and, to a lesser extent, employment.  We have managed to do so, however, while closely mirroring the stagnation in investment that has accompanied sharper downturns elsewhere.  So what is going on?

Government officials and mainstream commentators would likely rephrase this as “what is the big fuss?”  The economy is not only growing but picking up steam. We’re doing something right, even if we don’t know what it is.  Perhaps the new economy does not require the same levels of investment.  Sure, stagnant incomes and unemployment may be problems for some people but these issues will resolve themselves in due course as growth continues.  Sadly, this is the same, tired trickle-down theory that has failed the working- and middle-class majority for the past 30 years.  This time, however, after the most severe financial crisis since the Great Depression, there are more fundamental questions about our economy lurking in the background.

Profits are the main spur economic activity under capitalism; they are the driving force of the capitalist engine.  Capitalist firms exist, in the final analysis, to generate profit.  If both profits and profitability are high, then investment should not be in a long-term downward trend.  Investment in repairing, upgrading and creating new buildings, machines and technologies is what allows companies to continue to make money.  Otherwise these slowly fall apart and profits become compromised.  Yet rather than invest and despite near-zero interest rates, Canadian corporations have been happy to stash away cash, pay out dividends and consolidate control through share buybacks.  Not only has this benefitted balance sheets and the (predominantly) wealthy owners of business while doing far less for the majority of Canadians, it has produced a profound disjoint.  The lack of investment is a worrying sign, but one easily overlooked while other indicators remain relatively healthy.

There are a number of factors that are potentially contributing to the disjoint between profitability and investment, none of them particularly sustainable.

One factor is continuing consumption spending by Canadian households.  Canadian consumers have been happier to pick up the slack from falling business spending than their counterparts in other countries.  The level of household debt as a percentage of GDP in Canada has been rising unabated since the crisis, albeit now at a slower rate than during the explosion of debt between 2001 and 2007.  This is another anomaly amongst developed economies, as household debt levels have actually been slowly falling since the crisis most everywhere else.  What economists call “deleveraging”, or the destruction of bad debts, has not happened on an aggregate level in Canada and Canadians are simply taking on ever greater amounts of debt, putting themselves at greater risk if things turn sour.

The next factor is closely related and that is the continued growth in asset prices.  Debt can keep growing if banks and others believe that the assets which secure debt will continue to increase in value.  The main asset owned by many Canadians is housing property.  The housing market in Canada never saw the kind of correction experienced by the US and the European countries hit hardest by the crisis.  The IMF recently put overvaluation in Canada’s housing market at between 5 and 10 percent and listed it as one of the larger risks to continued recovery; the organization also noted in a separate publication that house price-to-rent ratios are 85% above average, the highest in the world.

More broadly, there is the danger that asset bubbles have substituted investment more broadly as sources of profit and growth in the economy.  Canada may have been shielded from the full effects of such a change, but the persistent fall in investment may be a warning sign.  Although radical economists have long argued that the developed economies may be entering a situation of relatively constant stagnation and slump that can only be broken by inflating short-lived asset bubbles, which inevitably pop and return things to the low-growth, persistent-unemployment status quo, their sentiment is now being echoed more and more broadly, including by mainstream Keynesians.

Then there is the issue of corporate cash.  When profits are growing but are not re-invested in the companies that generate them, corporate cash accounts grow.  This influx of cash can further exacerbate bubbles as it searches out profits on financial markets.  Utilizing profits to increase cash deposits rather than investing them back in businesses can also reflect changes in management that have occurred over the past decades, particularly at publicly-owned companies.  As managers have received greater portions of their earnings in the form of shares and other bonuses, greater attention has been paid to stock prices.  Cash deposits are useful for policies such as share buybacks that directly impact share prices and as a means to placate investors with higher dividend payments.

Finally, Canada’s economy is small, open and increasingly resource-dependent.  Some final clues may be found in the fall in profitability experienced by the resource sector.

As Figure 3 shows, profitability in resources fell dramatically during the most acute crisis and has remained lower during the recovery.  This has happened despite a quick rebound in many global commodity prices.  There are many possible reasons for this drop in profitability – too many to explore here – from lower prices on some key commodities to increased competition, particularly from the US, to political concerns.  Regardless of their source, profitability declines in such a key sector may have disproportionate effects on investment in other sectors.

With the crisis still raging elsewhere, Canadian companies may be simply following global trends in terms of investment and reflecting the economic situation beyond our borders.  The willingness of Canadian consumers to keep spending, the influx of resource boom profits and some more stringent financial regulations may have all contributed to propping up profitability while investment dropped.  Especially if companies are looking beyond our borders when making investment decisions.

Regardless of its source, the long-term decline in Canadian business investment is harmful to the economy and regular Canadians.  I hope to look at the fallout for working Canadians in a follow-up post as well as explore how different theoretical understandings of the crisis in investment by Keynesian and Marxist economists can lead to different analyses of the present and focus on different solutions.

While profitability and growth have remained high in Canada, low investment has managed to largely sneak under the radar.  Yet, high profits and low investment are not the hallmarks of long-term, sustainable growth.  Instead, they are a troubling sign of the bubble economics that was supposed to have largely bypassed Canada.  For now, lagging investment has not made itself felt.  Somebody is still making money…except it’s just probably not you.

[…] in Canada,  in a new blog, Michal has noted the same phenomenon (http://politicalehconomy.wordpress.com/2013/12/03/canadas-profitability-puzzle/): “the ratio of investment to profits has been falling steadily for the past two decades and […]

[…] series on the puzzle of high profitability and low investment in the Canadian economy. In the first part, I looked at some data that shows the existence of the puzzle and explored a few of the factors […]

[…] in Canada,  in a new blog, Michal has noted the same phenomenon (http://politicalehconomy.wordpress.com/2013/12/03/canadas-profitability-puzzle/): “the ratio of investment to profits has been falling steadily for the past two decades and now […]

Look there for more:

[…]I am now not sure where you are getting your info, however good topic.[…]

…Websites you should visit

[…]I am no longer certain the place you’re getting your information, but great topic.[…]