In my previous post, I outlined the disconnect between profitability and investment in Canada’s private sector.  While businesses are doing well and profits have rebounded quickly after the global financial crisis of 2007, investment has continued its slow and steady 20-year decline.  This decline is especially visible when investment is related directly to profits. Slightly more than 60% of gross profits are currently being re-invested, down by a third relative to just two decades ago.  Such a gap between strong profitability and dismal investment does not correspond with standard accounts of how the economy functions.  According to standard accounts, strong profitability should encourage investment, not depress it further.  This theoretical relationship is not borne out in recent Canadian experience.

While the last post also examined a few factors that could have been at play in creating this odd state of affairs, here I want to move in the opposite direction and look at two competing pictures of how to revive low private-sector investment.  The first picture comes from Keynes, the second from Marx.  I am particularly indebted to Michael Roberts, who has written extensively on the crisis from a UK perspective and who used a similar framework in a recent article (on the adoption of the idea of a permanent slump by mainstream Keynesians).

The two pictures agree on a diagnosis of on-going stagnation – with low investment being just one feature.  Indeed, the lack of sustained recovery across much of the developed world has led increasing numbers of mainstream economists to declare that the current slowdown is permanent.  Paul Krugman, likely the most prominent Keynesian economist, recently wrote that we may have entered a “permanent slump.”  Even the more hawkish Larry Summers has added his voice to the chorus, referring in a recent speech at the IMF to a period of “secular stagnation”.  Many Marxist and other radical economists have, of course, been making the same point for years, citing a variety of structural changes and imbalances in the economy, particularly those that characterize the neoliberal period that began in the 1970s when the great post-war boom lost steam.

While their diagnosis may be similar, Keynesian and Marxian economists see the way out of the current long-term slump rather differently.  In general, the Keynesian story is one of weak demand.  When the housing bubble burst in the US and other economies in 2007-8, it led to reductions in wealth, employment and income that quickly lowered demand.  Only massive injections of money into the majority of developed economies via quantitative easing (QE) stopped a full-blown depression.  The problem is that QE has resulted in maintaining interest rates effectively at zero without spurring significant recovery.  With near-zero interest rates, the hope is that money should be like a hot potato: costly to hold, moving rapidly from banks who loan it to companies who invest then hire and pay workers who then spend it on consumption resulting in profits that can once again be invested.

This hoped-for virtuous cycle has not quite worked out.  Much of the new money has instead gone to equity and real estate markets.  The funds that have made it to businesses have served in large part to increase their cash deposits and allowed them to pay out dividends and buyback their own stock.   A significant share of money so utilized also later ends up in housing and equity, further driving up asset prices.  The flood of cash has increased worries about the growth of new bubbles in both real estate and stock markets across the world.

Unlike the US, the UK, the Eurozone or Japan, Canada has not implemented QE.  On the other hand, more traditional monetary tools have been sufficient to bring our interest rates in line with the near-zero rates elsewhere.  Even without the same injections of central bank-supplied cash, Canadian companies have been able to follow global trends due to their sustained profitability. 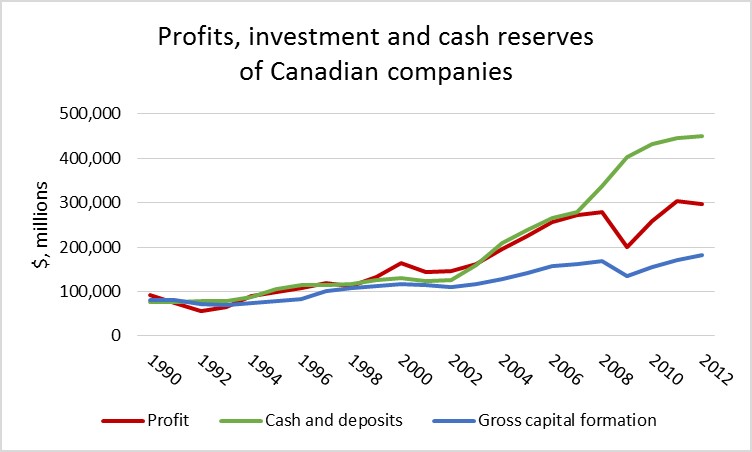 Figure 1. Investment, profits and cash reserves of Canadian companies (note that the first two are flows, whereas the last is a stock). Source: Statistics Canada and OECD Stat.

Figure 1 shows how the cash reserves of Canadian companies have ballooned; a recent report by the CLC found that dividend payouts as a share of profits have also expanded rapidly since 2007.  Even without QE, our economy is flush with cash that, given the paucity of business investment, ends up in asset markets. Indeed, Canada recently had the undesirable honour of making Nouriel Roubini’s list of countries susceptible to housing bubbles.  Roubini’s claim to fame was, of course, predicting the 2007-8 housing crisis long before it happened.

This rather long detour provides the context to return to the Keynesian solution to low investment.  In short, if the problem is inadequate demand, then the solution involves generating new demand.  The virtuous cycle of productive investment leading to growth in output, employment and incomes has, however, not restarted despite monetary policy that has sustained interest rates near zero.  Since the private sector has been unwilling to undertake investment in capital goods like technology, machinery and buildings to generate jobs and increase output, households continue to face unemployment and stagnant incomes.  With households are reluctant to spend and new private sector money going into financial assets and real estate, demand remains depressed.

If households and businesses cannot be counted on to increase demand, the only sector left is government.  Direct government spending via investment in infrastructure and expanded social programs is the Keynesian solution to stagnant private investment.  Once the reserves of unemployed labour and unproductive capital are put to use by government, there is hope that the private sector will begin to invest again as well.  Rather than businesses putting money into assets, Keynesians count on them seeing new outlets for their products – current demand coming from both direct government spending and the incomes of those employed in government projects as well as the vision of even greater demand in the future – thus spurring investment in productive capital.  In the Keynesian version, renewed investment-led growth ultimately happens in virtue of human psychology.  Optimism about the future and the vision of profit to be made drives the “animal spirits” of business owners.  The end result is a virtuous cycle of investment driven by optimism.

The Marxian picture, on the other hand, gives priority to profit.  If profit drives the capitalist engine, then when it falters, so does the whole machine.  Inadequate investment in non-financial capital is a sign that the profitability of undertaking such investment is too low, especially as compared to the profitability of speculative investment in assets.  What matters is thus partly how the profitability of new capital differs whether it is applied to production (most broadly, of any goods or services) or speculation.  This can help explain the profitability puzzle in Canada and unite Canadian investment trends with those in countries experiencing even deeper stagnation.  Growing asset bubbles in economies like Canada’s, which escaped the last crisis relatively unscathed, can yet depress investment.

Other factors that can hamper the profitability of new productive capital include overcapacity – too much capital sitting idle that makes new investment redundant – new technology – greater research costs and greater risks – and debt stemming from existing capital.  Perhaps Schumpeter, incidentally no friend of Marxian economics, summed it up best, calling capitalism the system of “creative destruction”. While high profitability is often associated with much of both parts of this definition, the sources of low profitability often boil down to their lack.  The Second World War and its aftermath illustrate this perfectly: the destruction of so much productive capacity combined with intense wartime innovation laid the foundation for a 20-year prosperity based on rebuilding and the transfer of wartime technology into the consumer sector.  This produced not only two decades of high profitability but sustained investment and growth.

Today, on the other hand, we are witness to an explosion of creativity on the side of speculative investment and a growing mass of productive capital that has not been destroyed. 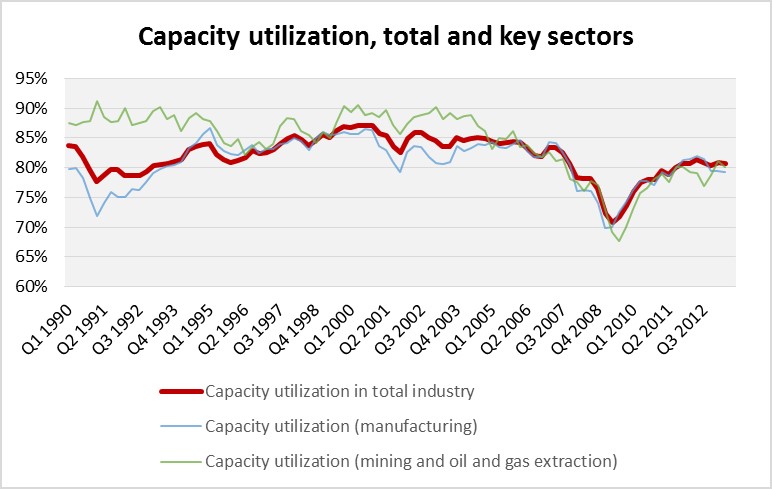 Capacity utilization has been slowly falling in Canada: evidence that a surplus of idle productive capital makes new investment relatively unprofitable, even in the resource sector.  On the Marxian picture, without the destruction of some of this idle stock or some other means that impacts relative profitability across the uses of capital, even renewed demand may not be enough to generate significant new productive investment.

On the one hand, the Marxian picture may be more fatalistic than the Keynesian.  On the other, overcapacity provides opportunities for more transformative steps on a local level.  Take the example of the recently-closed Heinz factory in Leamington, Ontario.  Sold off and slated to be closed by its new owners, the idle factory could be taken over its former workers and transformed into a co-op.  While such a co-op would still have to function within the capitalist system, the conditions for its viability would be not be the exactly the same as those for a capitalist enterprise.  In addition, the economic democracy instituted by a workers’ co-operative is a potential stepping stone to more profound economic change.

The question, then, is whether demand or destruction are what is needed to spur investment and reinstitute a growth regime not based on asset bubbles.  The answer, in the short term, is likely some mixture of the two.  The obstacles to both are, however, substantial.  The wholesale destruction of capital has, until now, been made possible by external circumstances such as war – something not on the horizon.  Transformative, institutional change, on the other hand, is politically unattainable on a large scale in the short term.  The Keynesian solution is also politically problematic in the current climate: the funds for any significant government spending program will eat into profits one way or another.

Indeed, at this point, the Conservative government’s answer to the question is neither; instead, the government proposes a third alternative: deleveraging.  This is a fancy “d”-word for austerity.  The austerity agenda is a political tool with strong economic foundations.  That is, the profitability puzzle may be no mystery after all; instead, it may be an intentional strategy to ensure the private sector gain with no pain, high profitability with low investment.

The (shorter) third and final part of this series on the profitability puzzle will wrestle with the austerity solution and its implications next week.

6 thoughts on “Demand or destruction: Two ways out of the profitability puzzle”