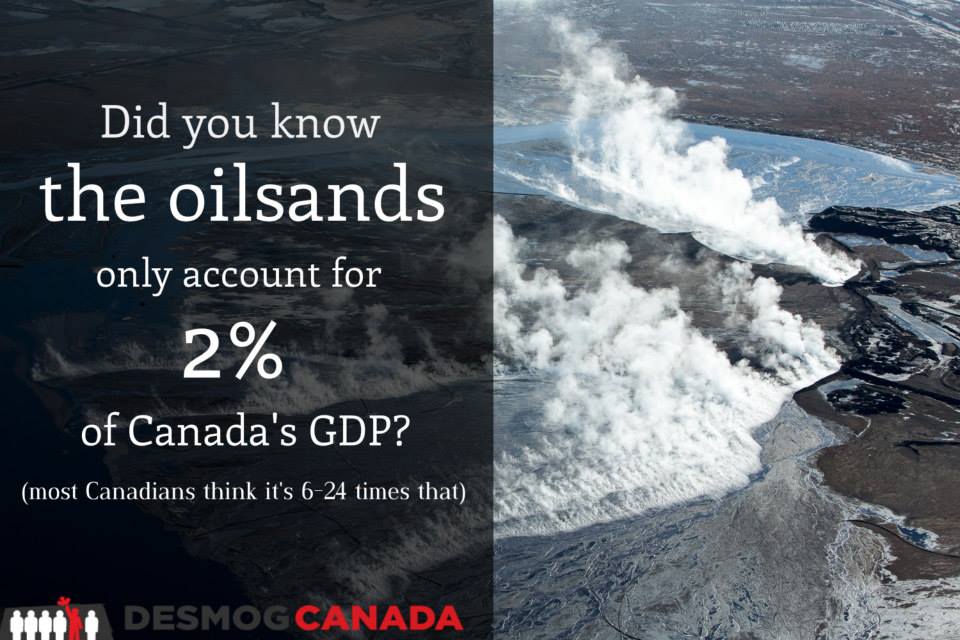 This 2% is certainly a surprising number but, as it turns out, Canada is not the only place where a small sector can have outsize effects on national economic policy and politics. John Quiggin has a good account of the recent rise and fall of the mining industry in Australia, another relatively small resource sector that became a national “leading light”. Here is an instructive passage on the skewed importance of mining to the overall Australian economy and the welfare of its population (the first part comes from another report cited by Quiggin):

The mining boom has already reached or passed its peak, and most Australians have seen little or no benefit as a result. Employment in the mining sector peaked in 2012 at a little over 2 per cent of the workforce. Mining-related activities, particularly construction, have generated more jobs, but are also at or near their peak. Employment gains in mining have been offset by the adverse effects on other industries of the sustained overvaluation of the Australian dollar

…for every $100 in value added by the mining industry, state governments get $6 and employees get $20. This leaves a profit of $74. Of that amount, the federal government gets $14, foreign shareholders get $48, and Australian resident shareholders get $12.

I don’t have all the relevant numbers for the tar sands and am unsure if anyone has done such a decomposition, but there are some similarities with Canada: direct tar sands employment is estimated at just over 0.5% of employment (100,000 jobs; or 175,000 and around 1% counting indirect jobs), over 70% of tar sands profits flow to foreign investors and the government has managed to collect around 6% of the total value generated by the tar sands (or an average 9% of the economic rent).

A second useful comparison of the place of the tar sands comes from Canada’s auto industry – another small, once-leading and still-important, sector. Here is the share of GDP contributed by the entire auto industry (including parts) and unconventional oil and gas development (almost entirely in Alberta’s tar sands) since the 2007-8 global crisis. 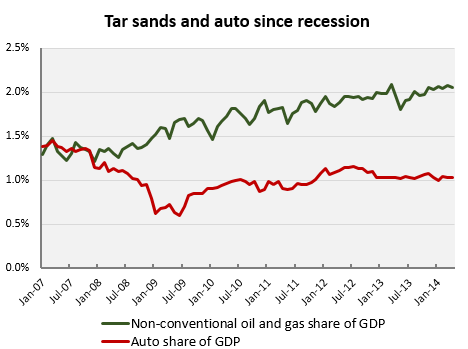 There are several interesting parallels between auto and the tar sands. Both are or were at one time or another seen as “leading lights” of the economy and given policy attention likely to be seen as disproportionate to their size. Both have been and/or are drivers of exports. Both are, in reality, fairly small when seen as a share of their contribution to Canada’s GDP. Both are also the recipients of state generosity, either via a weak system of royalties as for the tar sands or outright corporate welfare as for auto. And both are directly implicated in climate change and the growth of GHG emissions.

In light of these last two points, there is not much sense in arguing about the primacy of one industry over the other (though given the choice between tar sands and the auto sector, I would have to choose the second as it is the only one of the two that can be retooled to fight climate change – for example, by moving to the production of vehicles for cleaner-energy mass transit). The differing trajectories of auto and tar sands since the 2007-8 global crisis reflect complex developments within Canadian political economy: the changing political fortunes of Ontario versus the Western provinces, the continuing impact of free trade, the impact of developments in international currency and commodity markets, economic fortunes in the USA and much more.

If anything, the above shows what kind of disproportionate attention relatively small sectors of the economy can receive. The state is never neutral in economic development, although how it responds to broader trends can vary. We don’t need to look to the model of the East Asian developmental state to find sectors being prioritized. While Canadian policies are far from the activist industrial policy of picking winners pursued by the “tigers”, some of the strategies, from labour repression (partly via the use of migrant labour) to the use of fiscal policy to subsidize or enhance profits, are here.

Beyond specific policies, the rhetoric of nation-building that prioritizes a small private sector vanguard plays neatly into the neoliberal ideological project. Consider that each of the health and education sectors contributes over 5% of GDP for a cumulative 12% but would be laughed out of parliament or boardrooms if described as a leading light of the economy. Rather neoliberal ideology sees these sectors as drags on economic activity: financed by taxes, eating into investment. This is so regardless of the fact that private business investment is stagnant (while cash stocks and asset prices grow) and there are deep needs and opportunities for public service expansion.

“Nation-building” based on adding fuel to the climate change fire and regional differentiation gets official support over a potential public expansion that fosters intergenerational care and could ameliorate welfare differences (think a national strategy for First Nations health). What’s next? A national industrial strategy of mass transit infrastructure and green energy? Perhaps carried out at least in part by nationalized industry? In the face of any talk of reform, all that is left is to inflate the rhetoric of the leading, private lights, continuing to assign them importance beyond their size.

Yet even outsize booms must, however, come to an end sometime. Going back to Australia, much of what Quiggin writes about the fall of Australian mining sounds ominous in the Canadian context, for our boom too will come to a close:

…most of those who suggest that we squandered the boom take this to mean that we dissipated the benefits of the boom on wasteful private and public consumption, or by relaxing the pressure for unremitting economic reform that is taken to be the essence of good public policy.

It follows, in this view, that the end of the boom will produce a painful readjustment to reality. The usual end of such an analysis is a sermon on the need for a renewed round of micro-economic reform, essentially consisting of ‘the list’ of proposals remaining from the agenda of the 1980s.

A failed resource boom can easily only further entrench the very ideas and prescriptions that contributed to its failure – ideology unable to see failings even by its own standards and content with protecting the material interests that also sustain it. Indeed, it’s interesting to read the naked version of this ideology in an outlet like the Canadian Taxpayers Federation, which argues that because a teachers’ union is opposed to natural resource mega-projects and in favour of increased education funding, accommodating its demands will harm economic growth…when it is precisely mainstream economic growth models that specify education (what the education sector does) and productivity innovation (not what the fossil fuel sector is known for) as drivers of growth.

Ideas can eat themselves, but the material importance of natural resource extraction and the tar sands in particular remains intact. This is the outsize (un)importance of the tar sands. It is only and all of 2%. All the more reason to leave as much oil in ground as possible and all the more reason this will be an intensely hard fight that has only begun and requires a broad lens. We are in a vicious circle of material gains and the ideology that reinforce each other. 2% may not be much but it may take outsize energy to quash it.

One reply on “The outsize (un)importance of the tarsands”