Yesterday’s World Cup final nicely completed the old line that football is the sport where 22 players chase after a ball, but in the end… In the era of high technology, however, it’s not just 22 players running after a ball of course but a whole support squad of coaches, trainers, physiologists, doctors, dieticians, sleep experts – the list goes on. In a piece that walks a fine line between advertorial and actual content, the Wall Street Journal adds Big Data to the cast of sport’s supporting characters:

The Match Insights tool is exclusive to the German team right now, but SAP has plans to sell it more broadly in the future. “We are all about supporting our home team right now,” said [SAP VP] Mr. Burton. “After this we’ll want to maximize what we think is a credible tool for sport.”

“Match Insights” is a high-tech, data-driven sports analysis tool that collects thousands of data-points per second from cameras and sensors around a football pitch and turns them into complex measures of performance, potential weakness and so on. While it is surely debateable how large an impact such a tool actually has on outcomes (if at all, I would focus not on individual games but on long-run differences), two not quite sport-related aspects of this piece and the quote above in particular stand out for me.

First, this is a nice illustration of the complex, but still-relevant, relationship between states and corporations.

Completely unsurprisingly, it turns out that SAP recently signed a long-term contract with the German Football Association (DFB) to supply all of the latter’s IT systems (customer service, ticketing, etc.). Testing Match Insights can be seen as something of a perk tacked on later to sweeten the deal. While the DFB is a private entity, a nation’s football infrastructure relies heavily on public funding, starting with education and youth sports programs all the way to professional league stadiums. Similarly, SAP was born out of a restructuring at IBM and belongs to an early generation of IT companies that used and privatized the often-public research that laid the foundations for the explosion of IT.

The nationalist sentiment behind the current exclusive use of Match Insights by the German national team is partly cultural and partly economic (the contract for SAP software for SAP, the increased revenue for German football, German advertisers and so on), but, ultimately, business is business. The common relationship between business and the state is support for nationally-rooted but transnational capital that operates globally. Match Insights for the world – at the right price! 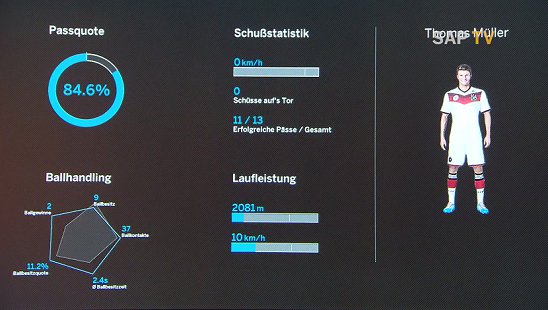 The second, I think more interesting, aspect of this sport-business-state synergy is the incorporation of more minute and omnipresent measurement and quantification into new spheres of life. Of course, sports has long been a statistician’s playground but systems like Match Insights mark a new step in the corrective use of statistical data on behaviour. The software can and was used to reduce ball possession and change play styles.

Indeed, here it really doesn’t matter to what extent the article’s claims about the impact of big data on particular match results are accurate: how much is product hype and how much is reporting. This is another way in which behaviour is monitored, analyzed and adjusted.

From health to sociality to leisure, our lives are to various extents “managed” by data: qualitative differences here and there reduced to larger or smaller quantities, whether of calories, friends or shots on goal. This was evident during the World Cup in some of the advertising. While the teams on the pitch took a break from being monitored by sensors and cameras, we were encouraged to do much of the same on a smaller scale – but at least here we do so theoretically willfully.

The place where this kind of monitoring is applied without our say – helping but also going beyond immediate profit – is at work. IT-driven monitoring and evaluation is already a reality across many workplaces; some like Amazon (in association with one of SAP’s German competitors) are quite advanced with measurement and analysis down to the level of individual actions. But, at the level of physical activity, this is still relatively amateurish stuff compared to the professionals in sports.[1]

As storage space and computing power continue to fall in relative price, big data technology starts to look better and better for increasingly “mundane” work as well, where the value of each employee for the profitability of the enterprise may not be as high. Remember, that unions in 2014 are still fighting to ensure the right of workers to pee on the job (thanks to Corey Robin for the heads up on this and nice analysis that touches more generally on monitoring trends). If even simple passing of bodily fluids unrelated to work activity can be undermined with relatively crude punch-in cards, think of the range of possibilities offered by big data to mould human behaviour:

”It’s my dream that we will one day have a fully connected performance centre that collects all the training data for all players and comes with small lab in which we can develop our own ideas.”

That’s Oliver Bierhoff, Germany’s general manager, giddy after winning the World Cup. With a few modifications it could also easily be your boss…

[1] Remember though that sports is work; work that is very lucrative for company and employee per employee-athlete, but work nevertheless. While it is not quite work at the World Cup level but the real money in tech like Match Insights is at the league level.