Take sectors where much of the work has to happen domestically, like off-line retail. No longer assessing items one by one, cashiers now rapidly operate barcode scanners and compete with self-checkout machines. While robots are usually thought to be taking over industrial work, automation is now nearly everywhere. True, automation doesn’t necessarily displace workers in a straightforward way – as U.S. President Barack Obama found out when he suggested ATMs were taking work from bank tellers when in fact the numbers of ATMs and human tellers have risen together – but automation ultimately seeks to reduce the number of workers doing a particular job. 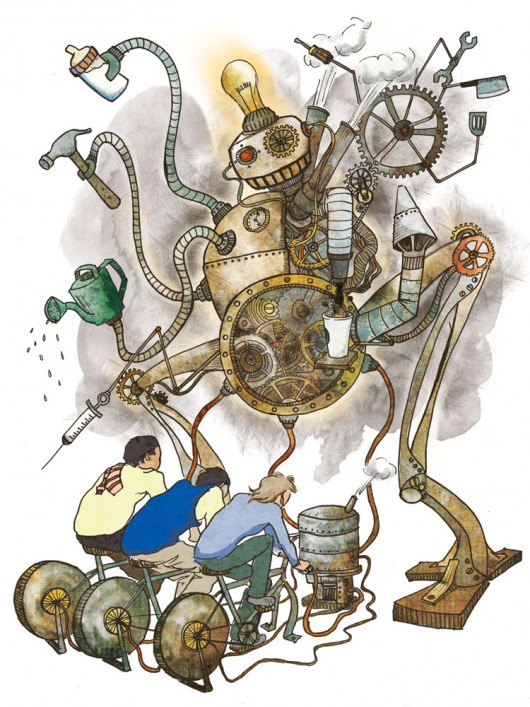 Beyond retail or manufacturing, consider health care. It wasn’t long ago that hospitals had full kitchens that cooked meals for patients on site. Today, many use pre-processed food made in centralized, industrial facilities, which require less labour overall and less skilled labour in particular. A similar scenario is playing out with hospital laundry services across the country. These changes in the work process have occurred in tandem with privatization, making it easier to slash wages and benefits and break existing union contracts.

Catalina Samson has worked in food preparation at the Vancouver General Hospital for 20 years, first as a public-sector employee and now at Sodexo, a giant food services multinational that has operated the hospital’s kitchens since 2004. Along with the introduction of processed foods, Samson has experienced a more frenetic work pace, more cramped conditions, and ever more menial tasks expected from workers. She confides that her work is less fulfilling than it used to be. “It’s so limited,” she says. “There’s no longer a sense of service quality for patients.”

Ken Robinson knows the feeling all too well. In his role as vice-president of B.C’s Hospital Employees’ Union, he has seen mass deskilling, job loss, and dislocation. Faced with such monumental changes, the union has often been on the defensive, he acknowledges. “At the end of the day, it was about trying to keep a stable work environment,” he says. Automation produces uncertainty, and, under capitalism, this uncertainty has a disciplinary function: it shrinks demands and puts workers back on their heels.

Like Samson, Robinson started out working in a hospital kitchen. He saw his job disappear as food preparation was moved to an industrial kitchen in another city (though one still within the public sector). At the time, he was able to retrain and find alternate work within the hospital, while becoming active in his union. The difference between his experience and Samson’s shows how workers can experience the same process of technological change and automation in different ways, depending on their organizational leverage at the time.

Last year, an influential study from Oxford University calculated that up to 47 per cent of existing jobs in the U.S. are susceptible to automation or computerization in the near future. The jobs most likely to be hit, according to the researchers, are not just low-wage positions in sales and services (think telemarketers) but also many middle-class jobs in office administration (think insurance or tax specialists). Popular new books with titles like The Second Machine Age make gloomy predictions about available work. This rhetoric about an automated threat to jobs dovetails with increasing rancour about the “hollowing out” of the middle class – a fear at the very centre of political discourse in both Canada and the U.S.

Nonetheless, debate rages about the role technology is playing in dramatic changes to labour markets, especially as job growth is increasingly concentrated in low-wage work. The reality is that, while robots take away the need for some skills, the way work is remunerated and distributed depends more on the workings of political economy than computer circuitry. It’s no coincidence that automation and deskilling in the health sector have been accompanied by subcontracting and privatization, creating working conditions that seem more suited to a Tim Hortons or a Burger King than a public institution. Worsening conditions like lower incomes, increased stress, and insecurity create an inertia that has been difficult for unions to counter.

Struggles and fears over automation are as old as capitalism, but they need not be a reaction to technology itself. Indeed, even the infamous Luddites of the first Industrial Revolution are being reclaimed from their misrepresentations in high school textbooks. For the Luddites, the fight was not against technology so much as for worker control over its use. Karl Marx famously saw capitalism as a necessary but impermanent economic system – one that would develop technological and human capacity while at the same time produce its own gravediggers.

Perhaps less famously, in 1930 John Maynard Keynes predicted that the development of technology, combined with the “euthanasia of the rentier,” would lead to a 15-hour work week by the year 2030. Of course, rapid technological change has led neither to Marx’s wish for universal equality and creative freedom beyond capitalism nor to Keynes’ wish for the same under a reformed capitalism. In fact, many of us work more and more for less and less, even as technology advances. How is this possible?

Automation is a potentially liberatory tool like few others, but when bosses and managers oversee its use, deciding what we produce and how we produce it, from iPhones to Humvees, the result is displaced workers who are forced to compete for other waged work rather than being freed up to live more of their lives without a boss.

Robots are not the only ones supposedly coming for your job, especially if your job involves the caring and emotional work that robots and computers can’t deliver. There are other ways to save on labour costs. Production – whether of goods or, increasingly, services – migrates north to south while workers migrate south to north. Much of this migration is highly regimented: rules are designed to keep migrant workers in extremely precarious living and working conditions, while at the same time helping maintain discipline over the entire domestic labour force. As goods move with increased freedom, the movement of people is strictly regulated, forcing economic refugees into precarious and often deadly circumstances like overcrowded boats…

Read the rest of the piece at Briarpatch

One reply on “Robots, migration and the future of work (Briarpatch Magazine)”

I really respect you but I think you underestimate the threat of technology.

What do you think of this video?
http://youtu.be/7Pq-S557XQU

Would fighting for a guaranteed income a better way forward? Even Milton Friedman was for it…