Are wages in Canada stagnant or growing? The short answer is another question: do you live in an oil boom province? There’s a fairly common meme that while Canada, like the US, saw wages stagnate, this is no longer true. Indeed, overall wage growth has picked up since the last crisis.

“Stagnant real wages” is yet another US talking point imported into Canada without checking the data pic.twitter.com/Z6fg2G4uMZ

The baggage that comes with this meme is that we here in reasonable, responsible Canada shouldn’t care about all those things that the US and European lefts are alarming about: no need to worry about inequality, austerity doesn’t concern us and so on. But while it’s a truism that we shouldn’t wholesale import analysis of another economy into the Canadian context, we are not immune to global trends. Yes, the US is a large economy with huge internal markets and this is a big difference; however, as a small, open economy, we cannot escape larger trends, especially with ever greater economic integration through free trade, freer movement of capital and international financialization.

One example of a phenomenon we haven’t really escaped is precisely wage stagnation. Here is a pair of charts showing wage growth since the end of the last recession in June 2009. They separate the three oil boom provinces (Alberta, Saskatchewan and Newfoundland and Labrador) from the rest of Canada. The first chart is from the survey of employers and shows the change in average real weekly wages . (It and all others are smoothed out to show the underlying trend, adjusted by provincial CPI and weighted by the size of the workforce in each province.)

The second is from the survey of workers and shows the change in average real hourly wages. 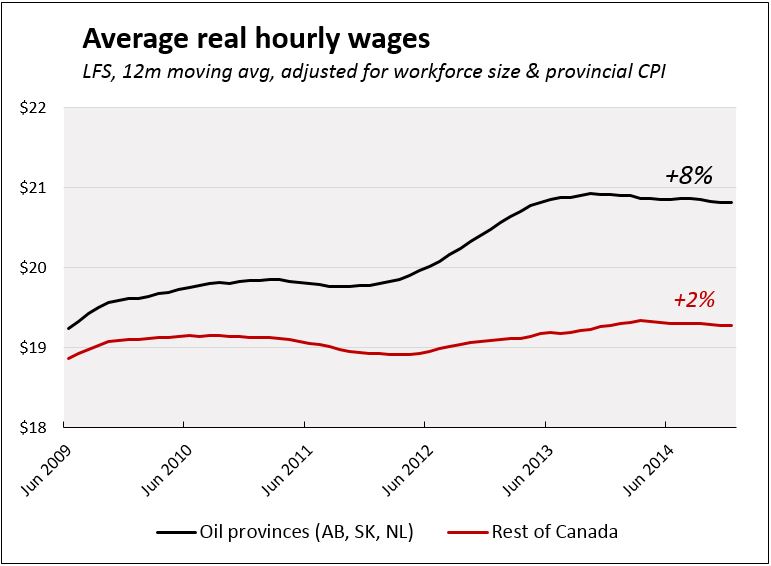 The picture since the last recession is not one of heady growth but rather one of stagnation for the vast majority of Canadian workers, precisely the 83% outside the oil boom provinces. Since Canada officially exited recession in June 2009, average wages outside the oil boom provinces have barely budged. Taking the median real hourly wage (which gives less weight to the wages of the highest earners) shows an even worse picture: effectively zero real wage growth in the past five years. 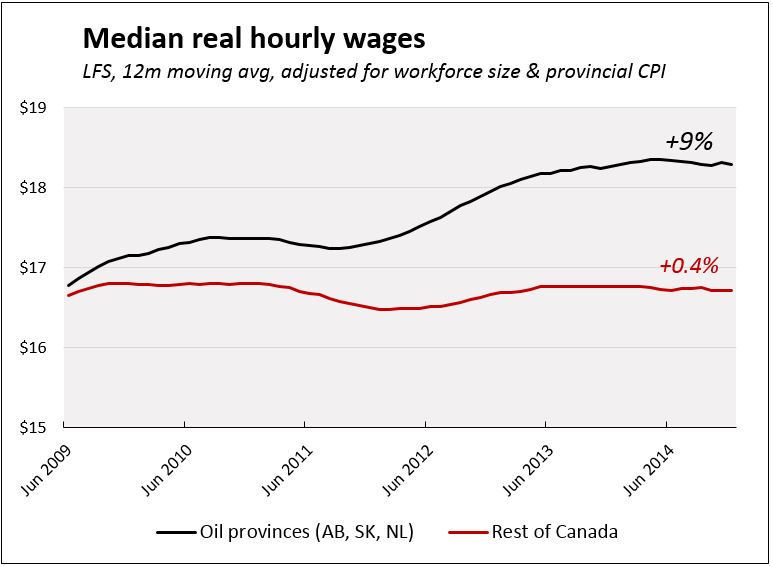 We can also take a longer view of the first two charts above, zooming out to 2001 and 1997 respectively. 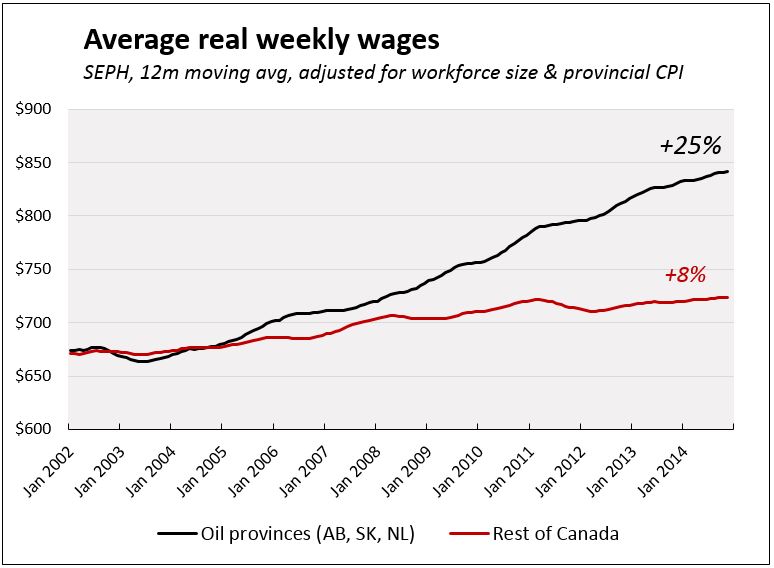 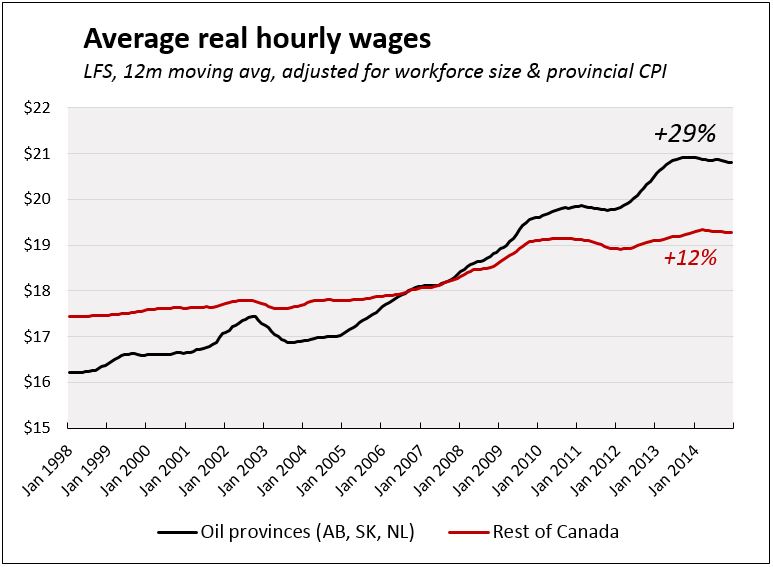 Both clearly show real (inflation-adjusted) wages have grown almost three times as slowly in the rest of Canada than in the oil boom provinces since around the turn of the millennium. This is especially jarring if you consider that Statistics Canada calculates that labour productivity grew by 25% between 1997 and 2014 and 15% between 2001 and 2014, or double the rate of real wage growth.

The current oil boom driving a minority of wages upwards is just the latest in a long history of Canadian commodity booms. It remains to be seen how long the current crash in prices will last and what precise effects it will have – the longer it lasts, the greater effects, though whether these will amount to a net gain or loss is uncertain. The point is not to prognosticate on the future or simply decry the oil boom but understand the kind of uneven growth in wages seen above and what it says about the political economy of Canada today. That’s an enormous task but here are a few thoughts.

First, taking account of the oil boom shows that the underlying trend in Canada is not so different than that in the US. Workers here have been subject to a similar loss of bargaining power, a similar decline of the welfare state and greater competition at the global level.

Second, looking at what has been happening in the oil boom provinces, in particular Alberta which has been its driving force, shows the struggle of employers to contain wage growth under conditions approaching full employment. Business rightfully worried that a dearth of unemployed workers might start eating into profits have been trying to mitigate wage growth in various ways (successfully to some extent as real wage growth even in the oil provinces has not kept pace with productivity, thus shrinking labour’s share).

Look in particular at Alberta. All in all, the strategies above say a lot about what it is possible for labour under neoliberalism even with essentially a full employment boom. Indeed, it’s telling that Alberta’s government immediately pushed for wage repression of the public sector rather than any, even mild, pro-cyclical policy as the bottom dropped out of oil prices.

Finally, there is the question of how the dynamic of uneven wage growth fuelled by a commodity boom has interacted with imbalances within the Canadian federation – both in terms of the trade and fiscal balances of provincial governments as well as the movement of capital within Canada. All of these factors merit a lot more attention in trying to understand the current conjuncture.

But at least we can say that while there surely exist some myths about the Canadian economy, for most of us, stagnant wages isn’t one of them.

7 replies on “Stagnant wages for over 80% of Canadian workers”

Thanks so much for sharing this data. I’m so tired of all the cheerleaders that scream “Recovery” all the time.

[…] labor costs were reflected in stagnant real wages for most workers throughout the ’90s and 2000s. The depreciating Canadian dollar further cut into wages with […]

[…] also benefited in the process. The rapid expansion of the oil economy has produced wage growth not seen elsewhere in Canada. Wages were forced upwards, especially as Alberta moved closer to full […]

[…] growth has been kept under relative control (though, of course, it has been much faster than the stagnation in the rest of Canada), there is a large and extremely precarious migrant worker population, and […]

[…] Lastly, stagnant wages, plus a low Canadian dollar, stifles consumer purchasing power. Consumer may likely not want to spend on games, as they feel the pinch with increased prices. Hence, why it’s unclear as to why it’s cheaper to buy video games than in the past. Ironically, this may not deter millennials (one of the video game industries top demographics), as they are willing to spend more on entertainment, despite not having the wealth of past generations. […]

[…] the global crisis of 2007-08, most of us have seen stagnation in incomes and living standards. The past year, with the global resource and commodity price crash, has only made things worse by […]