There is no political rocket science to the Oct. 19th election result. Even with our slanted first-past-the-post system, it would have been difficult for Stephen Harper’s Conservatives to squeak out a parliamentary majority, or even minority, given that more than two-thirds of the population wanted him out.

If vague notions of change played the lead role in the long campaign, then the economy wrote the script for much of the rest. The Liberals won, while the others lost, on economic issues.

Since the global crisis of 2007-08, most of us have seen stagnation in incomes and living standards. The past year, with the global resource and commodity price crash, has only made things worse by taking down the last bastions of growth, albeit ones based in the toxic extractive sectors of the Canadian economy.

Together these basic facts, lived every day by millions, made it inevitable that the economy would be the defining issue of the 2015 campaign and key to whether the change vote coalesced around the NDP or the Liberals. People were clearly tired of seeing Harper represent them, but in daily life, they’re tired of seeing their debt, their rent, their children’s tuition and their bills go up, while their jobs disappear or their incomes flatline.

The Conservatives ran on their trademark of low taxes as the response to everyday economic struggles: pocketbook issues that resonate in the absence of real left alternatives, but that conveniently ignore that the bank accounts of the wealthy are much larger and grow faster than anyone else’s under right-wing policies.

Even if overshadowed at times by racist fear-mongering, the economy was always there in the background. So much of the Conservatives’ focus on security and immigration policy was essentially about pinning the blame on outsiders for what are ultimately very homegrown economic ills.

On the other side, there was no robust alternative able to turn this basic lived experience into even moderately confrontational class politics. A narrative that saw the social majority on one side and the elites on the other was utterly missing from the Canadian campaign. 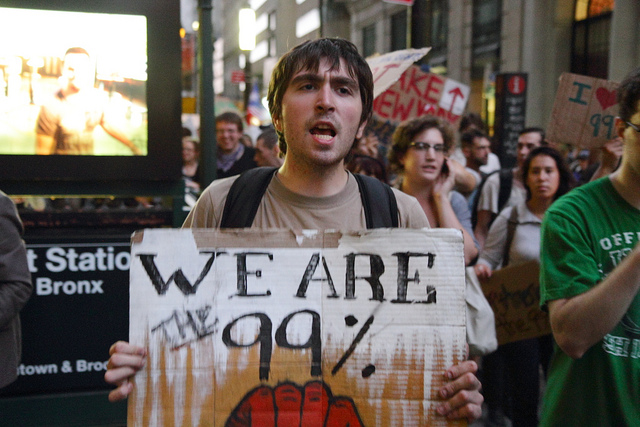 Unlike much of the English-speaking North, Canada has seemingly missed the message that it’s okay to talk about inequality, class and the fundamental injustices of a capitalist economy that works for the few. The Liberals swept into power in part because their fundamentally status-quo politics could be wrapped unchallenged in a soft narrative of change, sprinkled with the minimal dose of economic populism around deficit spending.

The good news for those of us not ready to celebrate the return of the natural course of things (and Canada’s “natural governing party”) is that the economy isn’t going away.

The rich will continue to keep getting richer, and the election of the Liberals doesn’t mean they will be gently persuaded to share their gains with the rest of us. Oct. 19th was not just a measure of the Liberals’ success, but also, as others have pointed out, yet more evidence of the failure of centrist triangulation by an apolitical and ahistorical “brain trust” leading the NDP.

While a sense of politics and history (remember 1993?) makes the election result a bit more familiar, the key for the left, whether in or out of the NDP, is to not only look at the NDP and its “brain trust” without illusions, but, more importantly, see itself under the same, glaring light.

The lesson that “you can’t out-Liberal the Liberals” is seemingly hard for the NDP to learn. It’s not enough, however, to just wave the magic wand of deficit spending. Trudeau can get away with this trick, and he did. But he was already going to get an easy ride from the corporate media and the elite; the NDP would have been attacked relentlessly for putting forward the very same policies.

Does this mean that a campaign of balanced budgets was the only road? No. But is the wrong question to ask. The correct one is rooted in everyday organizing in communities and workplaces. How do we create the room and the organized force to withstand attacks from the media, or use them to build a more confrontational politics? This is what the left, even in its current meagre form, can accomplish in the near future.

Right now, it’s time to get back to work. I hear there are some public services that need saving, some P3s that need opposing, some communities that continue to be ravaged by economic dislocation, racism and underfunding. And lo on the horizon, a generalized austerity, if history is our lesson, can’t be too far off.

Renewing the fight for a more humane society and a more rational economy won’t be easy, but it isn’t rocket science — and it’s the only way forward.

One reply on “Canada missed the memo: it’s OK to talk about inequality and capitalism”