I’ve been banging the drum of “slow-motion austerity” for a while and little in the 2015 federal budget suggests any change from the pattern of death by a thousand cuts. This budget is another is a series of unspectacular austerity budgets. Taken together, however, the cuts rapidly add up and budgets become more remarkable for the tenacity with they’ve made us pay to get to the present.

A long-term view focused on austerity is very different from much of the mainstream coverage of the budget with a tawdry focus on “goodies” for this group or that. While the media should be criticized for too easily swallowing government talking points and dividing people into opposed special interest groups, it would be naive to think of this budget outside the context of electioneering to carved up demographics. On the one hand, this reinforces a neoliberal narrative of each for themselves; on the other, this is also the reality of the on-going neoliberal transformation.

So while this budget may be more politicized than average in light of the fall election, I won’t write about goodies for groups. Instead, I’ll take the opposite tack: look at the election year budget as a continuity of slow-motion austerity past, present and future.

In my piece on the balanced budget law, I argued against engaging in horse-trading over how the books were really balanced or who did it better previously. After two decades of almost continuous austerity, focusing on this argument plays into and further cements the right’s frame. Of course, the hypocrisy of the balanced budget is blatant. Raiding the EI surplus, decreasing the contingency fund, and selling GM shares gave Joe Oliver $6 billion more in wiggle room but the balance was largely achieved through years of consistent austerity.

The recession following the global financial crisis and the one-time Keynesian stimulus in the 2009 budget to prop up the crisis-hit economy left a deficit that the Conservatives have spent the past five years consistently reducing, almost entirely through cuts to direct government spending. Spending has actually fallen in nominal terms. This means that it kept up with neither inflation nor population growth. The public sector has effectively shrunk. The specific cuts are familiar by now: everything from veterans’ affairs to food safety to environmental science has been hit.

The spending freeze has meant cuts to and reductions in services for the public and bad news for federal public service workers with over 35,000 jobs cut (or nearly 10%).  This year’s budget claims that the federal government has saved $40 billion since 2010. Of this, $9 billion is thanks to more efficient tax collection and a whopping $31 billion is due to austerity measures – “spending restraint.” The section of the 2015 budget document where these figures come from in fact reads like a paean to austerity.

Tax cuts only compounded the push to cut spending. Some like the Working Income Tax Benefit (really a new transfer rather than a tax cut) introduced in 2006 were targeted low down the income spectrum. Changes like this softened the blow of a falling social wage in the form of public services with a cash benefit and served to boost the consumption spending driving the last pre-crisis cycle of economic growth. There were also universal tax reductions, so-called boutique tax credits aimed at particular groups drawn largely from the wealthier end of the spectrum and business tax cuts. All encouraged austerity by slashing revenues.

While the Liberals in the 90s pulled the two-step of cutting spending to reduce deficits and then cutting taxes with the even-greater “savings”; the Conservatives have reversed the order since elected in 2006: largely cutting taxes first and then cutting spending to reduce the ensuing deficits. The $6 billion accounting trick to force a balanced budget this year would not have been possible with the many billions more in austerity over the past five years.

Note: I’ve focused on Conservative austerity here but Canada has seen two decades of persistent austerity – a longer article on this forthcoming.

For the coming year, the budget maintains the same harsh direct spending discipline that has been imposed for the past five. For example, it appears that the government has already factored in $900 million in savings from cutting public service sick days that are supposed to be the subject of contract negotiations later this year. The heading is budget item is appropriately Orwellian: “Ensuring a Healthier and More Productive Public Service” (table here).

Most of the spending announcements – whether the unnecessary increase in military, surveillance and police spending or very necessary and far too small increase in public transit infrastructure spending – are back-loaded, truly coming into effect only in several years. Additional tax cuts, such as income-splitting or the increase in the TFSA limit (“the end of investment income taxation in Canada”) are, however, immediate. The difference is that the new tax cuts are a revenue drain going back almost entirely into the pockets of wealthy, but need to be offset by more of the same austerity to get projected future surpluses.

The spending announcements are largely election year grandstanding signalling a future with slightly less austerity. Given the Conservatives’ commitment to budget balance and their optimistic projection of oil prices and growth, even these modest announcements may need to be let go under future right-wing governments. 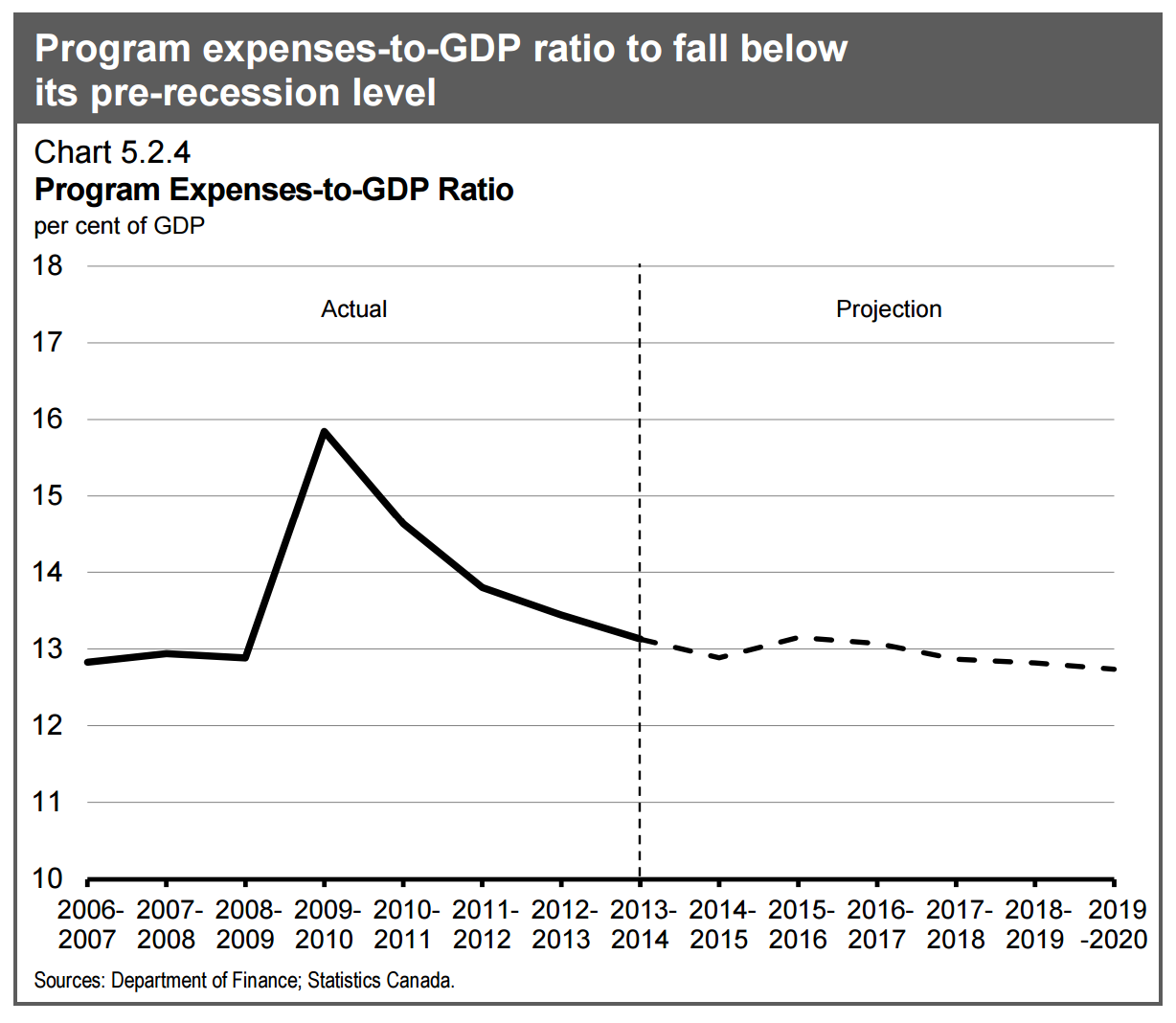 What would the future hold if the projections and plans in this budget came to fruition? Direct program spending is expected to start growing again next year (table here); however, growing at an average rate of 2.5% per year, it most likely won’t keep up with population growth and inflation, nevermind the growth of the economy. So even with the dollar amounts rising, direct spending will keep falling as a percentage of GDP, driving a slower but still present austerity.

Transfers to provinces and individuals are expected to keep growing roughly with the economy, but they too will undergo more or less austere changes. Take, for example, the Canada Health Transfer, slated to slow its annual growth from 6% to 3% in 2017. Given projections of roughly 1% annual population growth and the 2% inflation target, this lower growth rate will keep health spending constant in real per capita terms. Health spending will lag behind the overall economy, despite good reasons for it being expanded: an aging population, opportunities to implement new technologies and treatments or new services like public pharmacare and dental care.

Overall, then, this budget assumes that the public sector’s role in the economy will continue to shrink, albeit slowly: a slightly slower-motion austerity. Despite this, the 2015 budget does not only forecast a lesser role for the state, but a changing one. The neoliberal state doesn’t just recede, it transforms.

While health transfers, unemployment insurance and public safety departments are to undergo austerity, the military will expand. Or take infrastructure: the federal government will help municipal governments invest in infrastructure but will do so partly by paying the difference between municipal borrowing costs and the lower costs the federal government would have paid to borrow (rather than simply borrowing the money itself!). Other infrastructure projects will be supported only as public-private partnerships. Both measures are in a way private subsidies and integrate public provision further into the market.

Austerity has been a constant if shifting theme of the post-crisis budgets. The current budget is only the latest in a long series unremarkable for its similarity, remarkable for their dogged tenacity. The catalog of a slow-motion austerity past, present and future gives a full accounting of how we got here beyond this year’s surplus acrobatics. Time to devise an acrobatics of our own to get out of the austerity vise grip.

3 replies on “Budget 2015: A tale of austerity past, present and future”

[…] may be out of political fashion, but it’s clearly still in practice. They’ve just been doing it in slow-motion, hoping the public doesn’t […]

[…] may be out of political fashion, but it’s clearly still in practice. They’ve just been doing it in slow-motion, hoping the public doesn’t […]

[…] government will be in a position to break from budget surplus but not from important parts of the slow-motion austerity agenda. Given the current budget’s optimistic growth projections (2% real GDP growth for 2015 […]