I have a longer piece out in Jacobin today on tracing the roots of today’s austerity consensus in Canada to the 1990s. In a way, it’s me coming to terms with the last twenty years of Canadian political economy.

How exceptional is Prime Minister Stephen Harper and his crop of Canadian conservatives? For not just large- and small-l liberals, but also some leftists, the last decade has been an aberration — particularly compared to the alleged synthesis between responsible government and economic expansion that occurred during the 1990s. Yet while both public and elite consensus has shifted even further to the right since the ’90s, too often Harper and the current Conservatives are portrayed as an anomaly rather than a continuation.

The ultimate irony of the last two decades of austerity may be that Harper’s Conservatives have been able to rest comfortably on their laurels because of previous attacks on working-class power and livelihoods, even temporarily increasing public spending to save a system in crisis.

While the 1980s had laid some of the groundwork in Canada, the Right’s counterrevolution was not as successful as it had been under Ronald Reagan in the US or Margaret Thatcher in the UK. It was up to Canada’s Liberal Party, the centrist, “natural governing party,” to cement it. 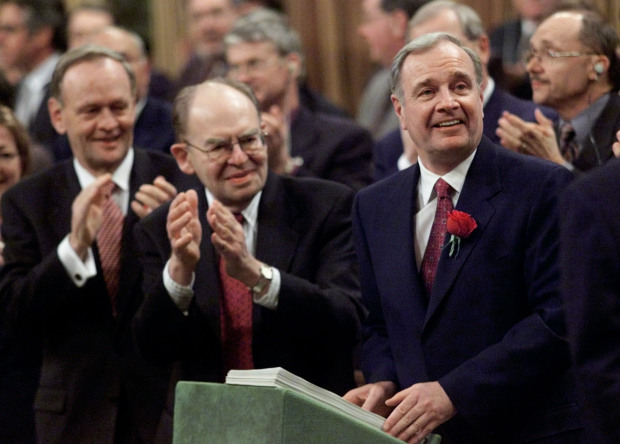 In his 1994 budget speech, Paul Martin — then the finance minister, later the prime minister — encapsulated the Liberal message:

The subsequent austerity drive was one of the most severe in the Global North, and remains the foundation for the Right’s strategy of death by a thousand cuts.

Taking this longer view of the political economy of Canadian austerity — and the nature of Harper’s conservatism — isn’t just crucial to making sense of the present. It provides more stable ground to fight for a less austere future.

The Foundation for Austerity

As the 1993 election approached, Canada was just starting to exit its longest recession since the Great Depression, and elites faced the prospect of both populist right-wing upstarts in the West and separatists in Quebec gaining popularity. The mass media stepped in and set a centrist tone, asserting the need for a new “responsible” government. As the Wall Street Journalwarned Canada would soon become a “banana republic,” more than a million Canadians watched a panicky episode of the investigative news program “W5” about New Zealand’s debt.

With the disintegration of the ruling Progressive Conservatives, the Liberals, led by Jean Chrétien, won a resounding electoral victory.

The economic environment the Liberals inherited was a product of the tight monetary policy carried out in the late ’80s. Modeled after Federal Reserve Chairman Paul Volcker’s high-interest approachduring the early Reagan years, it was intended not only to dramatically cut inflation, but to restore power to capital. Unemployment jumped from 7 percent to 11 percent. What’s more, the public debt accumulated during the elevated-interest-rate era, as well as during the 1990–92 recession, provided a pretext to reshape Canada’s public sector.

On issues of the economy, much in the Liberals’ 1993 campaign platform was developed with the help of private-sector experts. Billionaire Paul Desmarais Sr, on good terms with large segments of the political class, including both Chrétien and former Progressive Conservative Prime Minister Brian Mulroney, was a mentor to Martin and left his imprint on economic policy of the time as well.

A consensus developed that economic and employment growth on their own would not be enough to get Canada out of the recession. On the other hand, the Liberal experts were not in favor of the restrictive zero-inflation experiments that briefly held influence in the Conservative Party. Thus, monetary policy could be loosened, but the screws would have to be put to fiscal policy in order to make Canada more “competitive” — in other words, to make labor more pliant.

The monetary loosening that followed the early ’90s recession pushed interest rates downward and spurred lagging investment and profits. Low rates also meant the Canadian dollar depreciated against its US counterpart, jumpstarting a lagging export sector. Both profits and investment rose as a percentage of GDP through the late ’90s and 2000s, all the way up to the 2008–9 crisis.

Similarly, starting in 1993 and ending only in 2008, Canada consistently exported more than it imported, accumulating a current account surplus, primarily with the US. Canada was thus further integrated into the US-led global surplus recycling mechanism that Greek Finance Minister Yanis Varoufakis has called the “Global Minotaur.”

This economic pattern paralleled the integration of Canadian elites with their US counterparts. NAFTA, signed in 1992 by Mulroney and implemented in 1994 under Chrétien, was not a case of the US imposing its will on Canada, but rather of large sections of capitalist elites across the continent securing their common interests over the working class in both countries.

Free trade reconfigured coalitions within elites as well as between them and the Canadian state. Of course, some sectors were negatively impacted, but in general the agreement was a win-win for continental capital: rationalized supply chains not only cut costs but put more workers in competition with each other.

This was the context in which the Liberals began their cutbacks, initially quick and deep. A greater share of government expenditures redirected towards debt repayment created additional false scarcity of funds for direct spending. Spending on federal government programs and transfers to provinces, cities, and individuals fell by over 5 percent of GDP from 1993 to the turn of the millennium. Spending growth did not just slow: absolute expenditures decreased.

Reduced fiscal transfers to provinces put the squeeze on local governments. Since the 1990s, Canada has seen provincial governments — not just governed by Liberals and Conservatives, but also by New Democrats — impose austerity further down the line. Since provinces are responsible for many basics like health, education, and welfare benefits, shrinking transfers have further eroded the working class’s social wage. Privatizations, workfare schemes, tuition increases — all were applied (unevenly) across the country.

Overall, the sharp turn to austerity created a more punitive welfare state. While Canada’s economic growth in the mid to late ’90s fed off that in the US, the character of its reforms was also in line with the Clintonite agenda. There was a similar push to create conditions for business expansion even less encumbered by working-class demands. A major strategy was an attack on the social wage.

Read on at Jacobin…

One reply on “Canada’s Austerity Consensus”

A simple question please: What is a “social wage?” I am a small business owner in the SW United States. Best Regards.