It is “not the right moment” to discuss debt relief, Jean-Claude Juncker, the head of the EU Commission, was quoted saying, despite the increasing concessions. This is the political, not economic, function of the Greek debt. It’s not the right moment economically to discuss the debt because Greece has long been insolvent, its debt repayments kept on track by drip-fed funding via subsequent agreements of austerity. Politically, it’s never the right moment, because each new agreement maintains austerity as the only possible option.

Of course, there were many options to avert the scale of human and economic crisis that has engulfed Greece in the wake of the global financial crisis of 2008. Within the political context, however, these are purely theoretical niceties.

It has long been obvious that Greece is insolvent and unable to pay back its debts; even the IMF, one third of the Troika, has publicly recognized this since at least 2013. Options for reducing the Greek debt included larger debt haircuts for creditors or outright write-downs to long-term restructuring to intervention from the ECB to bring down interest rates. Jeff Spross and JW Mason make a strong case for this last option in The Week, highlighting how Greece was singled out for political punishment. 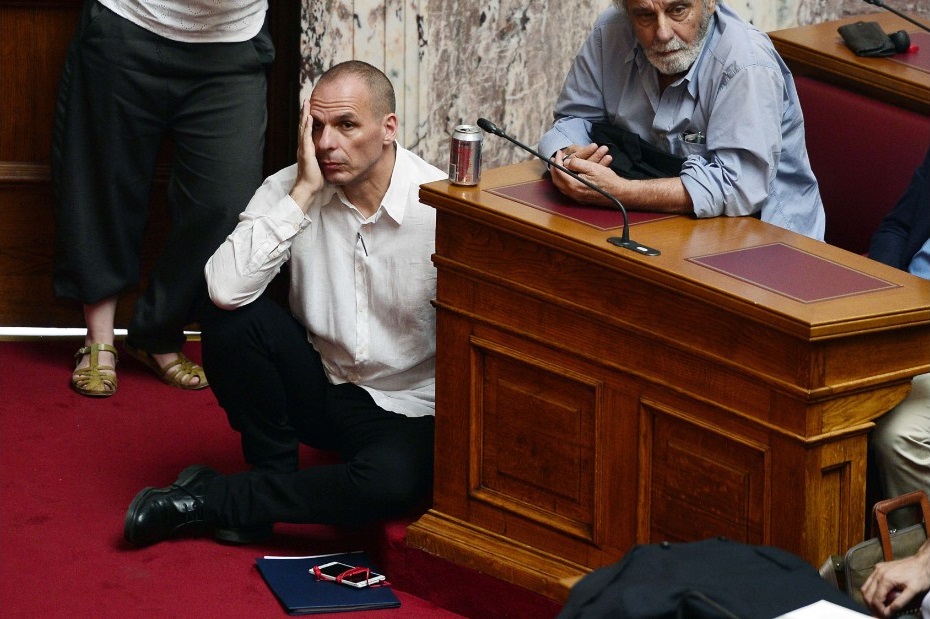 Out of an accounting of the political forces aligned against them, a majority of Syriza along with Finance Minister Yanis Varoufakis (who is not a Syriza member) have been clear that the most they can do initially is to save capitalism from itself in Greece. To this end, they have proposed measures to make the Greek state more efficient and less clientilist alongside others to boost investment. These have all been downplayed at every step by the European institutions. This despite, for instance, the fact that a sizeable fraction of tax revenue is regularly not collected in Greece and the rich openly flaunt their ability to refrain from paying.

Today, official Europe can countenance only austerity. Syriza’s expansionary proposals have been bargained down to something that is only a moderately social-democratic or “leftist” austerity. While the latest proposal includes some luxury taxes, slightly higher corporate taxes and a reduction in military spending, two thirds of the money raised will come from increases in VAT and pension reforms that hit at everyone, though both are to be implemented in a way that limits the impact on the poorest.

But even this proposal is seemingly not enough: it is only to be the basis for more negotiations coming later this week, which means more expected concessions from the Greek government and more pain for the people of Greece. It’s not just any austerity Europe wants, but a vicious right-wing austerity that hits at the vulnerable — and no talk of the underlying issue of an insolvent public debt so Greece can continue to be strung along as an example to others. In the face of this, the argument of saving Greek capitalism within existing European institutions has come under increasing scrutiny within Syriza. The intransigence of elites to make an example of Greece has increasingly led members of Syriza, including MPs, to abandon the majority point of view and call instead for a break with European institutions.

Sadly, their call has not been answered within the rest of Europe. The deal being negotiated this week shows just how far Germany and its satellites have been able to double down. Without left and labour pressure at home, Germany has been largely free to pursue a maximally punitive strategy. Likewise the governments of Finland, Austria and other smaller creditor states in central and northern Europe have been able to stand firmly in line behind Germany without internal pressure from their respective lefts.

The governments of the other debtor countries such as Spain and Ireland, on the other hand, have been equally punitive towards Greece because they fear giving any hope to their respective anti-austerity oppositions at home. The opposition, however, has not broken through anywhere outside Greece, and even Spain looks set to remains within the grip of its old parties in elections later this year.

Beyond the haggling over proposals at the official level, the politics of austerity have worked to divide and conquer workers across the Old Continent. In a Europe where elites have worked to limit wage and income growth in all countries, the neoliberal dream of individuals and nations engaged in a constant war of all against all has flourished.

Punitive austerity has united governments across the continent and the political spectrum, while dividing those who might be willing to pursue a common European project for social justice from one another. Enough of Syriza may yet balk at the current blackmail, but if the current agreement goes ahead, the next months will be perhaps more crucial than those that have passed since January.

The funds unlocked by an agreement will last mere months. The next crisis is around the corner, but without the albatross of constant “negotiations,” forces within Greece and their allies in Europe will have some time to regroup and renew the struggle for life beyond a neoliberal European project, whose rot is most visible at its southeastern edges.

To do so, however, the unavoidable lessons of the past months will have to be dealt with: the extent of the failure to secure anything but milder austerity, the fact of European elites united in their willingness to punish Greece, one small country, in order to entrench neoliberalism across the whole continent, and the inability of left allies in the creditor countries to break through and provide large-scale solidarity.