There is acrimony and division in Athens, after the Syriza government submitted a revised list of proposals to its creditors. Despite a resounding victory in last Sunday’s referendum for Oxi — the “no” vote rejecting creditor demands that Greece fall in line — the government has presented austerity measures that exceed those previously on the table.

Despite dissension within the ranks of Syriza, the Greek parliament approved the government’s proposals in a bitter debate and vote that stretched into early Saturday morning.

The proposal now includes €13 billion in measures over three years rather than €8 billion over two. In short, it is a terrible austerity package. It enforces consecutive primary surpluses (calculated as Greece’s budget balance minus debt servicing payments) on a depressed economy, cutting expenditures on transfers like pensions and raising taxes. 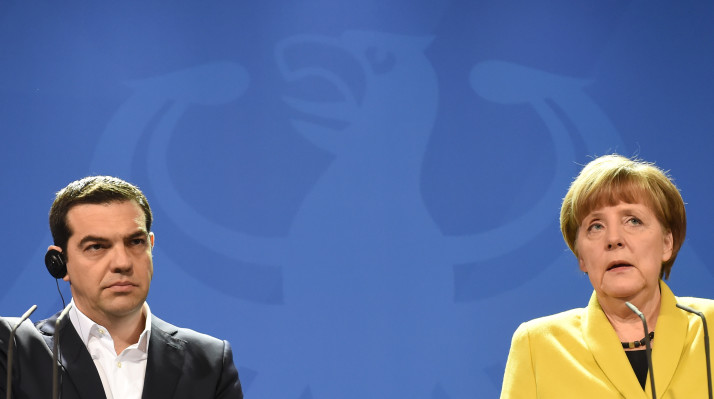 In contrast to previous proposals and memorandums, the current proposal somewhat moderates the intense class bias of austerity measures. More of them are directed towards the rich in the form of small corporate tax hikes, a more progressive income tax, and cuts to spending on military contracts. All this, however, is far too little to talk about in any serious way. After so many “last chances” at the level of official negotiations, punitive austerity appears to be the edge of possibility in Europe today.

To say this shows the bounds of a neoliberal, technocratic Europe sounds a little hollow by now. Yes, a split has finally appeared between the creditors — France helped Greece draft its proposals, which Germany sees as insufficient — but if the political choice in Europe is between François Hollande’s technocrats and Angela Merkel’s, then it is the slimmest of margins to be toying with.

The third choice, of course, is Grexit. The main wing of Syriza around Prime Minister Alexis Tsipras has set a Greek exit from the European monetary union as its ultimate “red line,” not to be crossed voluntarily. Even if this is merely the underestimation of their adversaries power and willingness to destroy the Greek economy, there is much to be said. The grenade pin of leaving the currency that was in the hands of Greece in 2012 has become in 2015 the pin that would blow up the Greek economy in the hands of Wolfgang Schäuble, the German finance minister.

At this point, the most likely Grexit scenario involves European elites pushing Greece out as a final way to make their point. “Based on months of negotiation, my conviction is that the German finance minister wants Greece to be pushed out of the single currency to put the fear of God into the French and have them accept his model of a disciplinarian eurozone,” wrote Yanis Varoufakis, until recently Greece’s finance minister, in a piece in the Guardian.

The familiar story about profligate debtors is pure politics. But after criticizing this morality play of the European creditors, it doesn’t make sense for us to create new ones. If it’s easy to cheerlead from afar, it’s also all too easy to yell betrayal. What would we have done? What should we do?

Ending austerity and keeping the euro appears an impossible duo in Greece, with the country still enmeshed in economic depression unseen outside wartime. Despite the brutal conditions imposed on them, the Greek people have resisted more than anyone the austerity that has forced those who are least responsible to pay the most. This movement has been built over years, and is much more than just Syriza. It will outlive the government.

With barely functioning banks and the possibility of a chaotic exit on terms set by capital, the Syriza government, which wanted to harness the power of this movement, has now made its constrained choice, played the only hand it had. The implicit calculation says the catastrophe of chaotic exit in the grips of a willfully manufactured banking crisis is greater than the catastrophe of further austerity.

In the wake of the past weeks, it is clearer than ever that the people who have shouldered the greatest costs of a Europe-wide crisis are the most willing to keep fighting for a better future. The loud Oxi! coming from Greece in last Sunday’s referendum was evidence. The European left has failed to do enough to help this cause. The spirit of internationalism, the organization, the anger and the material force of other European lefts will all have to grow.

Negotiations with creditors are underway this weekend in Brussels. A final agreement is due on Sunday, and the United States is said to be exerting a lot of pressure to get it done.

For now, I’m left wondering where the next days and weeks will lead, both in the streets of Greece and in the other countries held captive by neoliberal Europe. Can something bigger still be won from this moment, from this defeat that exposes more of the absurdity that is official Europe? This question can open more possibilities than those contained in a wave of recriminations.

One reply on “Austerity insanity: on the Greek proposals”

Funny how technocracy, which means implementing evidence-based policy, has come to mean its very opposite: forcing terrible, self-defeating economic policies on people that get clearly disastrous results which are blissfully ignored by the pseudo-technocrats in charge.

It looks like old European plutocrats have borrowed from Western central bankers who, over the past 35 years, developed monetary ideology and called it science — and themselves technocrats — with equally disastrous results.

According to Joseph Stiglitz, there is a monetary conflict of interest between bondholders and workers. The fake technocrats at central banks were free to err on the side of protecting the wealth of wealthy bondholders with a low 2% inflation target that soon brought back boom-to-bust business cycles. (The “dot com” bubble that collapsed in 2001 was replaced with the housing/derivatives bubble that collapsed in 2008. We’ll have to wait to see what the next bubble-economy will be, if a recovery ever happens.)

In the process, they turned the employment rate from 91% to 84% at present (US male age 25-54; no demographic change; see FRED,) which facilitated corporate downsizing and falling real incomes (which grew with GDP during the post-war era — 1945-1980.)

Yet despite hitting bottom as early as 2001, requiring near zero-bound interest rates to spur a fake recovery with dismal GDP growth, these technocrat pretenders patted themselves on the back for the economic miracle they wrought which they still call the “Great Moderation.” Now that the economy has collapsed, they say this mysterious phenomenon of “secular stagnation” has befallen the Western economy, whose causes are unknown. Yeah right.

In order for civilization to survive we need to develop real economic science people can rely on to get reliable results. Presently the field of economics is less reliable than astrology. If we put astrologers in charge we might not have a global economy and civilization on the brink of implosion. (If not astrologers, why not people, and call it democracy — the best of all worse alternatives especially agenda-driven ersatz technocracy?)