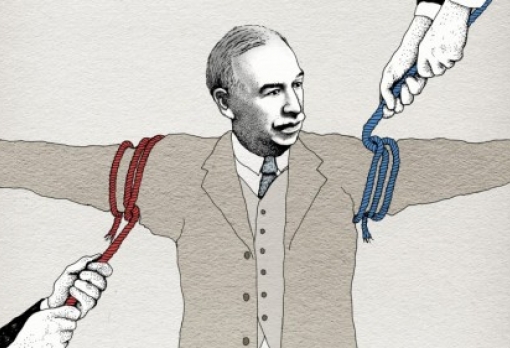 In comparison, the drift of rhetoric towards balanced budgets at all costs as the backbone of fiscal policy is not only economically toxic, but politically facile. Take the two reports released by the Parliamentary Budget Officer last week. That released on Thursday, which adjusted the government’s forecast budget surplus to a $1 billion deficit got all the press and attracted the most commentary. It was a great “gotcha!” moment: the Conservatives who pulled all the tricks in the book to balance the federal budget in an election year are nevertheless headed for a deficit. It’s a fair point, but giving it almost exclusive focus means that we’re stuck playing the game with the goalposts still shifted far to the right.

Little noticed was another report released by the PBO just one day earlier. Wednesday’s Fiscal Sustainability Report is arguably far more important. Put in stark terms, the report states that further austerity is a purely political choice. Here’s one of the report’s chief conclusions:

Federal net debt is eliminated over the next 35 years under the baseline scenario. To maintain the debt-to-GDP ratio at its current level over the long term, the federal government could permanently increase spending or reduce taxes by up to 1.4 per cent of GDP. This would require setting aside its balanced budget law.

Translated, this means that even given the current tax mix and keeping the debt-to-GDP constant there is room for up to $28 billion more in spending per year every year. Given economic growth, moderate deficits will keep debt-to-GDP constant. What’s more, both of the assumptions on keeping taxes and the debt ratio constant could easily be challenged by even the mildest of Keynesian alternatives.

For instance, Canada’s debt is extremely low both by historical standards and compared to other advanced economies. As the Keynesian argument suggests, it would be easily sustainable at higher levels, all the more so given a reorientation towards growth (not to mention important functions it serves, providing both a safe asset and liquidity while acting as a stabilizing mechanism).

The relative and absolute levels of debt, however, are not just a technical statistics but fundamentally political. The room for deficit spending explicitly referenced in the PBO report requires not only a fiscal policy reoriented towards the social majority but also greater political engagement and power in the hands of this majority so that the debt is not used as a political tool that continues the upward redistribution of wealth and income.

It is plainly possible to maintain the current low debt-to-GDP ratio or even and lower it further; however, doing so in the context a commodity boom that’s run out of steam, sluggish domestic demand and humdrum investment while avoiding a negative impact on elites will mean stagnant wages and fewer public services for the majority of society. Further austerity means lower taxes on the rich and fewer labour protections, less and lower quality services and thus more precarious life for the many.

The modest alternative of a return to growth and an economy that stops to function as an upside down funnel is there for the taking, but it is not a simple policy choice. It’s not that growth-friendly policies like a public childcare program that creates good jobs and release more women into the labour force or an investment fund that helps spur green innovation won’t benefit elites, but that the austerity consensus might benefit them more.

Countering this means not only appealing to elites for an expansionary policy but engaging with the social majority for an alternative politics.

5 replies on “Where is Canada’s mild Keynesian alternative?”

All I know is the NDP is planning on a massive increase in spending in part to jump start the economy and they’ve publicly rejected Austerity and are calling for a greater government intervention in the economy.

And you know this precisely how?

The argument I’m trying to raise here is that a commitment to balanced budgets and not raising taxes will make the kind of program that reflates the economy through spending and breaks with the current slow-motion austerity difficult. But the space for such a program is there…

[…] and how much it challenges distribution of resources and power themselves. What kind of mild Keynesian alternative are we talking […]