Because the minimum wage for most workers is determined by the provinces, the NDP proposal would affect only a small portion of employees. Federally regulated workers are found mostly in telecoms, real estate, finance, transportation and a few smaller sectors.

The Conservatives, of course, have long opposed any significant hikes in the minimum wage that would actually lift up low-wage workers rather than simply keep them afloat. Still waiting for wealth and income to trickle down after decades of rising inequality, the Conservatives rely on dated arguments about job losses that simply aren’t found in the latest economic research.

The Liberals have taken a different tack, poking holes in the NDP’s calculations and arguing that the NDP’s headline claim that the federal $15 wage will help 100,000 workers is overblown. Mike Moffatt, an economist who sits on Justin Trudeau’s economic advisory panel, has done some decent number crunching and found that the NDP’s claims are likely too optimistic. Taking into account inflation and population growth, Moffatt calculates that by 2019, the year by which the NDP has promised to have a $15 wage fully implemented, closer to 30,000 to 50,000 workers will be helped. It could turn out that wages completely stagnate for the next four years or that there is an explosion of Bell and CIBC call centres, but Moffatt’s projections are likely in the right ballpark.

In a sense, it’s an improvement to go from arguing over whether raising the minimum wage will help low-wage workers at all to arguing over how many will get a boost. On the other hand, by doing some poor numbers work, the NDP have opened themselves up to concern trolling by the Liberals. In a cynical move, the Liberals have absolved themselves of working to help low-wage workers by focusing solely on attacking the NDP’s somewhat extravagant claims.

The NDP could have better inoculated themselves against attacks, and still strongly defend the federal $15 minimum wage by getting back to the core issue, which is shifting the balance back in favour of workers across the country. The past decades have seen tax breaks, freer trade and weaker regulations, all carried out to the benefit of business. The argument about exactly how many workers would get a federal $15 minimum wage is a sideshow. 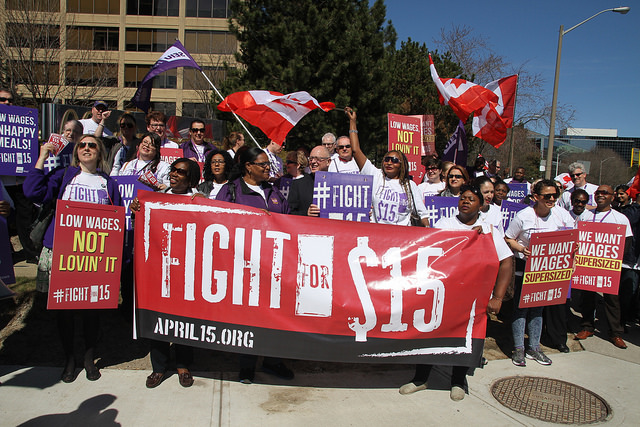 Most of the labour of rebuilding and building power will come from workers. Federal and provincial governments can lend a hand, but their means are limited, especially when workers are weak and divided. Indeed, if a $15 minimum wage reaches even fewer people by 2019, that could mean that workers have been strong enough to extract larger wage gains from the boss and are already earning more.

This week I interviewed Jane McAlevey, well-known U.S. organizer and author of Raising Expectations (and Raising Hell). She contrasted the current Fight for $15 with the victory in SeaTac, a municipality south of Seattle and the site of one of the first showdowns over this magic number. SeaTac’s fight was distinguished by actual organizing and unionization and was led by a big coalition of workers.

Since then, the struggle for a $15 minimum wage has garnered enough attention to enter public debate and a number of cities have agreed to it for certain groups of workers. But without the push of organized labour that was seen in SeaTac, most places have set implementation dates that are years down the road.The difference is tangible: SeaTac has $15 now, while many of the other cities must wait.

A $15 minimum wage is a blunt anti-poverty tool; it is more important in boosting incomes and rebuilding power among low-wage workers. The long-term success of the Fight for $15 will lie in organizing and creating institutions that support low-wage workers fighting for themselves.

From this perspective, it’s alright to recognize that a federal $15 minimum wage won’t help the majority of minimum- and low-wage workers, and will help less than 100,000. The NDP could be clear on these points and still make $15 an important campaign promise.

It’s a signal: $15 tells other provinces, unions and all Canadians working crappy low-wage jobs that the federal government is ready to work beside the hard organizing ahead.