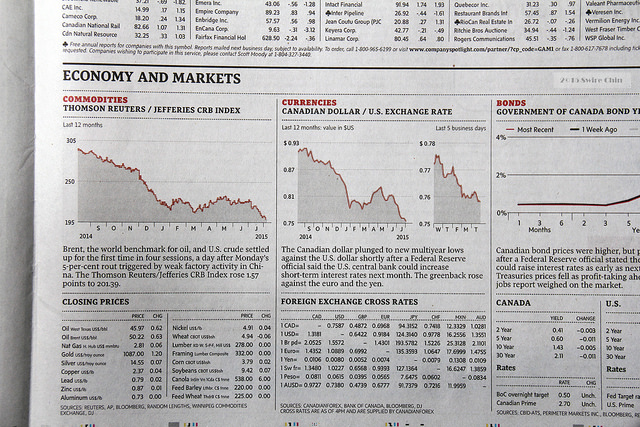 This week saw wild swings in global stock markets. While it’s important to remember that the stock market is not the economy, a lot of global economic fragility and instability affects Canada. The price of oil is at lows unseen in years with no sign of an upswing; China is turbulently moving from faster, investment-led growth to slower, consumption-led growth; and Europe is performing ritual suicide in the name of paying off unpayable debts. All this on top of a Canadian economy that is at least slouching, if not in recession, and not generating enough internal demand.

Prime Minister Stephen Harper’s response, meanwhile, has been that of a broken record: the fundamentals are strong, and now is not the time for “new and untested economic strategies.” Funnily enough, not only is spending and investment by government in order to reboot growth an old and well-tested strategy, it is precisely what is lacking today. The focus should be on whether the old and tested strategies stimulus strategies still work — more on this below.

NDP not making it easy on themselves

Tom Mulcair says the NDP can balance the budget, “because we’ve got a lot of experienced people … governing is about priorities,” alluding to the NDP’s new star candidate Alex Thomson, the former finance minister for Saskatchewan who is running in the Ontario riding of Eglinton-Lawrence against incumbent Joe Oliver, the Conservative government’s finance minister.

The Liberals are the only ones who have been able to break out of a balanced budget framing so far. On Tuesday, Trudeau left the door open to deficit spending, and warned against austerity under an NDP government: “Let me tell you this, the choice in this election is clear. It’s between jobs and growth or austerity and cuts — and Tom Mulcair just made the wrong choice.”

Hearing Trudeau talk about deficit spending with former finance minister Paul Martin by his side should give pause. Martin, who slashed budgets mercilessly in the 1990s, was trotted out by the Liberals as Trudeau attacked the NDP for preparing to impose austerity. The bizarre nature of this event was dwarfed only by its cynicism.

The NDP has not made the task of deflecting such criticism easy on itself, however. The party for now appears caught in the jaws of what looks to be an impossible trinity. It has so far made three main economic promises: (1) slightly increase corporate taxes and undo income splitting, but not touch much else in terms of raising revenues; (2) balance the budget; and (3) implement important and needed new spending, including national childcare.

Keeping all three promises is simply not possible, at least not without more detail on major additional revenues. Not that there is a lack of options; for example, there is room to tax top and upper-middle incomes, wealth like land values which prop up housing unaffordability, carbon or consumption, making exemptions for the basics and the consumption of the poor.

The current NDP story makes it too easy for opponents to poke holes and paint the party as economically incompetent — something the mainstream is already predisposed to. And the Liberals can be expected to continue trying to make cynical left critiques as with the latest austerity gambit.

On its own, next year’s federal budget will fall into deficit. This is due in part to the global economic situation, but also years of “starve the beast” tax cuts. Successive governments have created a revenue problem by cutting taxes, and then painting the situation as a spending problem instead, which is used to justify new cuts in spending. This is the vicious circle of austerity.

So how do we talk about the economy during an election while avoiding the absurdities so far?

The problem is that while even many mainstream economists will proclaim that government spending is key to boosting economic growth when private investment is as weak as it is now, most don’t pay attention to the power and politics behind the economics.

As the gap between rich and poor has widened over the past few decades, the economic elite has grown in stature. Deficits and government spending sounds fine to them if it gets the economy going — even childcare will allow more women to go back to work and some may fill all those low-wage service jobs sitting empty because employers aren’t willing to pay more — but anything that genuinely threatens the slow upward trickle of wealth and strengthen workers too much in the workplace won’t be so happily tolerated.

This is the old tension between how much a left or centre-left economic program does to reboot economic growth and how much it also increases the expectations, capacity to organize and, ultimately, bargaining power of working people. A robust and sustained program of deficit spending, even if it is economically possible, is practically difficult in a small, open economy like Canada’s, not because our economy couldn’t benefit from it, but because businesses and money can, among other things, threaten to leave.

The answer is to meet the power of money with people power and honesty.

Not only should we be talking more about austerity (rather than leaving it to cynics), we should be acting to rebuild the social links that austerity has worn down: talking and organizing in our neighbourhoods, our workplaces, our universities and beyond.

When media and politicians take the politics out of economic debate, they erase the very real tension between the interests of the powerful few versus the interests of regular people, those often working more for less.

We need to start having the conversation that much of the world is having about austerity, who it benefits and who it harms.

We need to start asking who our economy works for and why. Perhaps we will find that it will take getting together to really make it work for us.

One reply on “This election, let’s really talk about the economy”

I don’t know whether to think Mulcair is making a cynical political calculation with his balanced budget talk or he actually believes that balanced budgets mean something in an economy performing as poorly as Canada’s. I really hope it is the former rather than the latter but I would prefer him to educate the electorate on the need for a deficit right now. Of course Trudeau tried that with his “budgets will balance themselves’ when economic activity picks up but was attacked for his supposed naivete by the Conservative propaganda industrial complex. A rock and a hard place it is.