Justin Trudeau’s friends in finance, consulting and big business dominate the grandly named Advisory Council on Economic Growth. A few months after recommending a giant privatization scheme, the gang is back with more ideas, many very good for them but very bad for you and me.

The biggest news: a recommendation to increase the retirement age from 65 to 67. Trudeau has been breaking promises and sticking with Stephen Harper’s policies left, right and centre, so it’s no surprise to see his economic advisors raising another Conservative corpse from the dead—despite the fact that Trudeau actually rolled back Harper’s shift of the retirement age up to 67 in his first budget. Of course, when Harper proposed it, it was mean-spirited, when Bay St. wants it, it’s the bleeding edge of innovative growth strategy!

Beyond this one terrible idea, the Council’s report is full of warmed-over buzzwords and overblown market-speak. Recommendations will “re-imagine the role of government (specifically, as a convener/catalyst and as an investor)” and “catalyze the formation of business-led ‘innovation marketplaces.'” There’s a bit of Sheryl Sandberg feminism for the 1%: gender inequality ameliorated via “a corporate gender diversity challenge.” Yet elsewhere the ideological bent is more transparent: “much of our potential is untapped, held back due to policies (e.g., excessive regulations).” Chamber of Commerce talking points shouldn’t be a surprise in a document prepared in the C-suite, but they’re being sold as “inclusive growth.”

The retirement age proposal is one of the best example of who these recommendations are really serving. We hear a lot about how society is aging and it’s almost always presented as a problem. Trudeau’s advisors agree. They’re blunt: “Pension systems should not discourage working. Older Canadians willing to remain in the workforce beyond the traditional retirement age should not face disincentives.” But think about it for a second: we are adding functional years to life. We could treat this time as a gift of progress, as an opportunity to develop talents, further our hobbies or take on new ones, educate ourselves, create or simply enjoy life.

The dangerous question for business is, if we able to do this when retired, why can’t we have more time to do the same things in our prime? Trudeau’s Council answers the question by cutting it off: everyone will just work for longer, whether young, middle-aged or old. Extending work cuts off the question of extending opportunities for everything else, entrenching the norm of working as living.

Of course, other options exist. Unemployment in Canada is a not insignificant 7%. If the issue is getting people to do the work that needs doing, then why not start with getting a job for everyone who wants a job but doesn’t have one?

Rising productivity (we are able to produce on average nearly twice as much per hour of work than fifty years ago) and a bigger labour force (mostly from women entering it in the post-war years) should mean we all get to work less. Don’t forget that what “working age” means is up to us. How much we work is not dictated by natural law but by social convention. These are political choices. 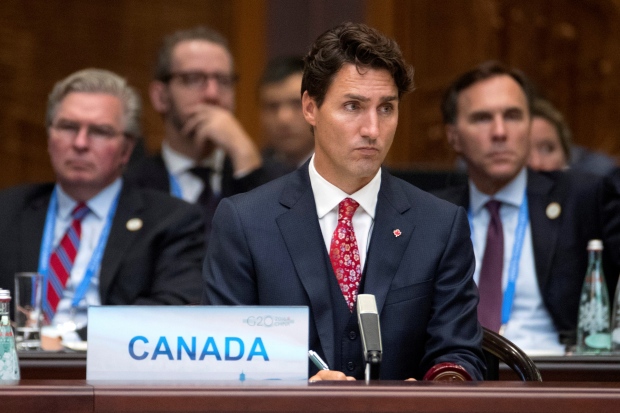 Trudeau’s business allies have made their choice clear: they want us working longer. First of all, while we get wages to survive, the profits from the work we all do funnel upwards. The more we work, the more there is for the CEO and bankers to gather up just by dint of being idle owners (even if many of the rich today also work as managers).

But there’s a second reason: while unemployment is bad for the unemployed, some unemployment is good for business. If you’re worried about losing your job, you’re bound to make less trouble at work—maybe not demand a raise, agree to unpaid overtime or ignore that vacation you should be getting. Sure, too much unemployment slows down the economy, but too little can heat up demands. Better put some retirees to work and keep everyone in their place.

Other recommendations play up a false progressivism but follow a market-friendly script that’s growing tired as the world bounces from crisis to stagnation. For example, there’s the FutureSkills Lab (see what they did there, running words together all futuristic?). It’s being set up ostensibly to help workers at risk of robots taking their jobs. But for all the fears of workers losing jobs, the proposal is focused squarely on employers.

This means that the most simple solution, already mentioned above, is ignored: if more jobs will be automated, we could all just work less. This, however, would mean sharing ownership over the robots and the profits they produce—a big no-no. Without that, fears of automation are likely over-blown. Rumors of robots taking over jobs have been swirling for the last two-hundred-plus years and capitalism keeps inventing new things for us to do.

But even then, there are more worker-friendly solutions. Tuition-free college and university is an easy one. If, as the Council admits, companies “underinvest in general skills such as problem-solving, critical thinking, and persistence”, then why not give as many people as possible these skills as a baseline? More generous unemployment benefits, especially combined with tuition-free universities, could give workers more time to retrain and prepare for new work.

Instead, the proposed FutureSkills Lab would be a government agency that further subsidizes employers who don’t put enough money into training their workers. Even as the Council notes that employers are spending 40% less on training than two decades ago, their solution is to get employers to tell them what they need and then pay universities to create courses for specific skills. So much for general skills! This is little but another public subsidy that continues the long tradition of excusing employers from investing in job-specific training.

There are a few silver linings in the reports. There is a call for more funding for First Nations education—good and long, long overdue. Sadly, this recommendation is followed up by another supporting public-private partnerships on reserves. (Then there is the fact that Trudeau’s own government has shown that even when funds are promised, it can drag its feet on delivering them.)

Another good idea that gets a quick mention is a “universal subsidized” childcare program. Advocates have been calling for national childcare for years and their work here shows. Unfortunately, Trudeau’s corporate and Bay St. friends focus on the “subsidized” over the universal. In fact, for them more “progressiveness” means more means-testing rather than universality.

But childcare should not be a gift to the poor; it should be something we can expect, a social right. While the Council pitches childcare strictly as a way to get women into the labour force, it is even more importantly, something that enhances gender equality and women’s autonomy. Even just on an instrumental level, it is much easier to build broad, lasting support around simple, universal public services. Seeing that Trudeau already expended political capital on his means-tested child benefit and with pressure from his right on rising deficits, it seems unlikely this idea will get much pickup.

Despite the buzzwords, the ideas of flowing from the executive suites of those who populate Trudeau’s Advisory Council are too-smart by half without being truly innovative. They’re largely a mix of warmed-over neoliberalism and tepid centrism—tossed and dressed in the language of a Silicon Valley prospectus. There are simple ideas that we could be trying instead, from working less to eliminating tuition. But we shouldn’t pretend we’ll be able to while Bay St. insiders are calling the economic shots.

I’m still waiting for the “leisure society” promised to us by futurists half a century ago. But then we haven’t got the flying car either. Wonder why?

I’ve been wondering who Trudeau’s neoliberal advisors are. Thx. for posting.

Why not leave retirement age at 65. If the person wants to retire let them. If they want to continue working let them if the company agrees. When people retire it opens up positions for other people. Younger blood. That’s what companies are looking for. Stop being a shit bag Trudeau.