Note that while the fiscal update makes all the right noises about First Nations, the fight against climate change or public transit, the motivation for infrastructure investment is squarely to provide global investors with better returns in the new, low-growth, low-interest-rate reality. Take a look at the main chart Morneau provides: 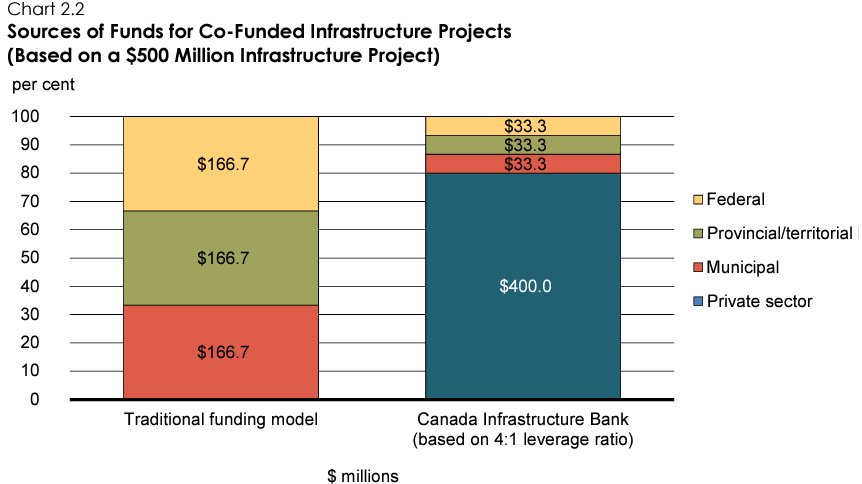 Anytime something seems too good to be true, it probably is. The private sector won’t be “leveraging” for free. What used to be simply called privatization is now the “flywheel of institutional capital participation” or some other gratuitous b.s. CUPE economist Toby Sanger has calculated that majority private financing of this kind can double the cost of a project over 30 years. While the federal government can borrow at under 2%, private capital needs stable returns in the 7 to 9% range. The end result will be some combination of higher user fees, subsidies or cuts elsewhere to make up for these guaranteed profits to private investors. (Though we won’t see this for a while; like recent funding for First Nations education, most of the federal infrastructure money is backloaded until after the next election.)

Keynes, who came up with the idea of deficit spending out of a crisis, wouldn’t recognise the bank in this Fiscal Update. Rather than his famous call for the slow death of the rentier, this is a massive rentier giveaway. Keynes thought we would end up socializing investment. What the Liberals are facilitating is the socialization of risk to fund private gains.

Given how the last few decades of financial “innovation” have worked out for the global economy, we should be wary anytime the government pitches its big idea centered on “using innovative financial tools.” Why not just build public works, period?

The reason is that while austerity may have fallen slightly out of favour among a section of the elite brokers of the global economy, privatization remains an important component of the new consensus being forged.  Even the IMF paper that argued neoliberalism is on its way out, and made so many headlines in the process, praised privatization as an important component of economic strategy. The private sector may not be investing enough on its own but we shouldn’t deprive it of profits! Canada has historically been open to policy experimentation from a “well-intentioned” technocratic elite. This is the 2016 model.

Compare Trudeau’s approach to a new national investment bank with a real progressive vision for the same thing put forward by Jeremy Corbyn and John McDonnell in the UK. While Morneau is concerned with raising rates of return, McDonnell talks about economic transformation, bringing more democracy into the economy and transforming ownership to put workers in control. The focus is putting the spare capacities of people, not spare capital, to use.

The Canada Infrastructure Bank fits with the Liberal belief in markets and market processes as the ultimate economic guide. Government can at best support markets or give a kick start. This is the consistent thread that runs through recent decisions. The Liberals just outdid EU technocrats in pushing ahead the CETA free trade deal, one only slightly about trade and more about extending corporate power. Or take climate policy: new pipelines may be OK’ed because we now have a market mechanism (carbon pricing) that will supposedly push funds towards the right projects in the long run. This is even though the carbon price is too small in foreseeable future to make a significant difference and regardless of the coordination failures that stop the private sector from taking on the massive green investment needed for a real rapid transition.

Canada is back and we’re doing woke neoliberalism better than ever. While Keynes is rolling in his grave, the rentiers who continue to walk the earth are rubbing their hands at the government-sponsored feast that awaits.

3 replies on “The great rentier give-away”

[…] core. The infrastructure bank privatization scheme was the big news item in the fall fiscal upate (see my post from last week), but there are far more goodies to make business happy tucked away in the update and in news from […]

[…] shine is finally wearing off. Whether approving pipelines, settting electoral reform up to fail or privatizing airports and transit, the Liberals are showing themselves to be the good capitalist managers they’ve always been, […]

[…] and big business dominate the grandly named Advisory Council on Economic Growth. A few months after recommending a giant privatization scheme, the gang is back with more ideas, many very good for them but very bad for you and […]