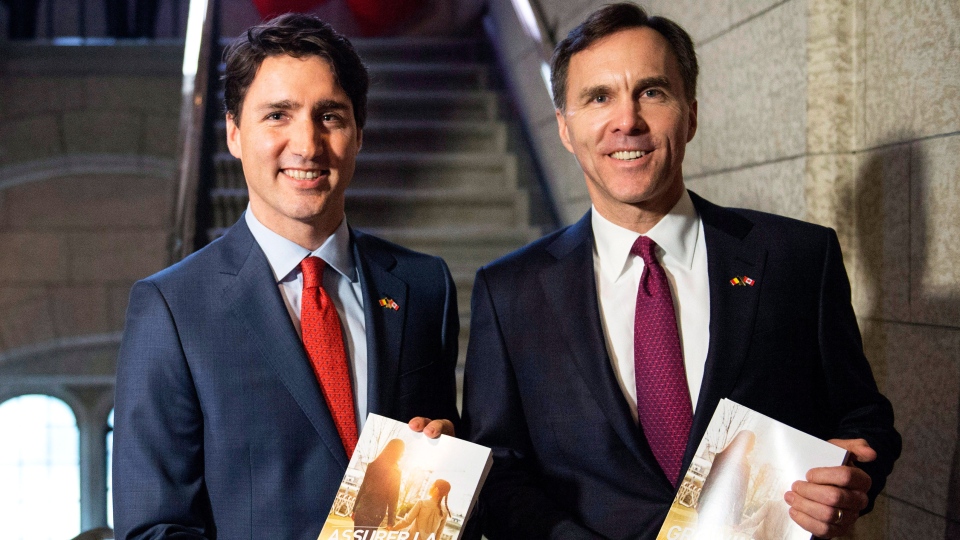 Freeing trade and expanding foreign investment. First things first: today’s trade deal are less about trade, which is already largely free. For instance, while Canada and the EU just signed CETA, they rank 13th and 5th respectively on the World Economic Forum’s measure of the absence of trade tariffs. The Liberals have been immense champions of this deal and the Trans-Pacific Partnership (TPP) that links the Pacific Rim countries.

So why are these deals so important? They help cement pro-business regulation not only now but in the future. At 1000s of pages, the main thrust of an agreement like CETA is not lowering tariffs; trade is complex, but not that complex.  The bigger aim is to entrench rules that can be used to put limits on and circumvent democracy. Today’s free trade agreements are not mainly about removing regulations for business but placing new regulations on government.

The Liberals are also planning to ease foreign investment rules, clearly signaled in last week’s update. The problem isn’t that liberalized capital is foreign, it’s the lack of control. Here is another example of the government abdicating its presence as an democratic check on major economic relationships. Relaxed rules will put more communities at the whim of investors who can fly as quickly as they land. And freely-moving capital has its twin in unfree labour…

Keeping temporary workers temporary. Rather than revamping migrant workers programs in the name of justice—crucially, status on arrival with a clear path to citizenship—the Liberals are continuing and expanding the shameful temporary worker programs of the Harper government. Keeping migrant workers tied to one employer for the length of their contract opens the door to every possible violation of labour rights. Without the possibility to exit a contract, workers are at the mercy of bad bosses.

Rather than forcing employers to treat all workers equally and expand immigration, the Liberals are carving out more space for exemptions, whether for low-wage agricultural and service workers or high-end, fly-by-night professionals, something just introduced in the fall update. Here too, business gets the upper hand. Equal rights and status for migrants could revitalize entire communities, grow the labour movement and boost local economies. The Liberals would prefer to give business one more way to keep all workers in line by limiting the rights of some.

Privatizing and privatizing some more. I wrote last week about how letting private investors fund infrastructure is effective privatization. I’ll just add that there is a whole cycle involved. Take a look at this helpful chart which shows how much the government will have to spend on this massive infrastructure program.

Five out of the next six years, they’re spending nothing! Why would a massive new infrastructure program cost the government effectively nothing after the first year? Not only will private investors be largely building and operating the new roads and utilities, existing public infrastructure can be sold off to the same private investors to get the government’s seed capital. Major airports have cropped up on the list of object first on the auction block. Rather than operate for public benefit, they will now be run for private profit. Public infrastructure is easy to sell and very hard to buy back—just ask the British, who would love to have their public railways (by a 60% majority) or post service back. Once more, privatization will benefit business not only today, but bolster its hand far into the future.

Rationalizing the welfare state. The goodies that are supposed to soften the blow of all the policies outlined so far look to be more about marketing than substance. The Canada Child Benefit is so far the best example—and a mildly positive one—of this trend. The Liberals unified multiple transfers with multiple exemptions a single, simple cash benefit that’s higher than the old ones put together and gave it a sexy new name. The problem is that, by 2020, low-income families will receive scarcely a few dollars more per month than what they would have under Harper’s old web of benefits. Income supports are welcome but they should buttress expanded universal services rather than be at the centre of social policy.

The federal Liberals are learning lessons from their Ontario counterparts who have perfected the art of reorganizing and repackaging existing benefits as exciting new programs linked to popular left demands: a single process for grants is now free tuition! Sure, one process or one benefit is better than ten but other than simplicity there is often little more to it than high-flung rhetoric. And while we’re just hearing the first whispers of it federally, talk of basic income falls under this rubric and could be much more dangerous, paving the way below poverty-line benefits to be normalized for a long time.

Keeping a lid on wage growth. Both Justin Trudeau and his finance minister Bill Morneau have recently expressed an odd kind of “get-used-to-it” empathy with precarious workers. The best they can offer are palliatives, mostly re-training. What they won’t say is that the problem is much broader: it’s not just that jobs are more temporary—in fact, the amount of the actual temporary work may barely be rising—they are generally crappy. And the Liberals will not do the one thing that would help the most: put pressure on employers to raise wages. A federal $15 minimum wage and pressure on the provinces would be a relatively simple start.

The fall fiscal update was full of ideas to raise returns for investors but said little about raising wages for workers. Even the dovish among US central bankers are talking about letting the economy run hot for a while to allow some wage pressure to build for the first time in a decade. In Canada, the recent review of monetary policy was an opportunity lost; it passed nearly without sound. The Liberals take the crap the business world dishes as a given and offer the equivalent of a shoulder to cry upon for the rest of us.

Running deficits. This plank of Liberal policy gets all the press, but it is really one of the least significant. The Liberals are propping up demand a bit in the next couple of years, but the neoliberal project of remaking the state in the interests of business, started decades ago and continued valiantly by Chretien, Martin and Harper, remains unchanged.

While deficits will hover at a not very significant 1% of GDP for the next few years, the capacity of government to provide services will not expand. Program expenses as a percentage of GDP are projected to be the same in 2021 as they are today; government revenues as a percentage of GDP will be even lower! Canada’s ultra-low debt-to-GDP ratio, a reason to pursue really expansionary policy, is projected to fall from 31.1% this year to 30.4% by 2021.

Putting the pieces together. I’ve long argued that the Liberals are at the leading edge of rebuilding a centrist, neoliberal consensus for a low-growth world. This is mere tinkering at the edges of a rotting, fragile equilibrium. Rising debt, run-away housing costs, shitty jobs, a growing climate emergency—any solutions that would truly start to redistribute power and resources to deal with any of these pressing issues are out of bounds. Trudeau is showing what the global elite thinks is the perfect play for the moment. Poverty, inequality and precarity liberally pepper speeches and marketing materials, only problem is that the underlying phenomena stay the same.

Trudeau is capably steering Canada towards a new money-manager capitalism—one that uses government to guarantee profits for global asset owners while keeping a lid on discontent from the rest with vaguely progressive messaging. It is no longer individual firms like GM or Enbridge that get the most important meetings with ministers. Blackrock, the world’s largest asset manager, and McKinsey, the world’s largest consulting firm, are the new faces of government’s closest allies. Their executives are among the government’s closest advisors, most notably Dominic Barton, McKinsey’s managing director, who chaired Morneau’s growth advisory council.

There is real change from Harper’s regime, only the change Trudeau is slowly enacting isn’t one driven by remotely progressive economics but a realignment with different economic elites. Harper’s Conservatives had close ties to narrow sections of the elite, the fossil fuel industry for one. Their economic policy was also more transparently redistributive; for example, their income splitting plan if passed would have effectively given a massive tax cut to the top 10%.

Trudeau’s Liberals are in tune with a much broader elite and they are able to keep up some appearance of an even broader coalition of interests. For example, the “middle class tax cut” was immensely successful rhetorically despite cutting taxes most for the second-to-top 5% (90-95%) of the income distribution. In other words, the Liberals are oriented towards the entire elite (and not just in Canada) while their policies are rhetorically in line with nascent sentiment against growing inequality. In the end, the Liberals still serve narrow interests, but more global than those Harper aligned with.

Trudeau’s economic plan might not come with as big billboards as Harper’s or such easy and obvious targets for opposition. It may seem friendlier, greener or more cosmopolitan. It’s lasting effects, however, will be much harder to undo. Trudeau is slowly working to bind the hands of future governments to an economic vision written not for us but for the few.

Its clear where this is all leading; to make labour a global commodity that corporations will have the legal ability to move to any country they please, and with their own work force at the expense of local workers.

[…] Those of us who anticipated and warned that Justin Trudeau would continue such policies were shouted down. But privatization, deregulation and shrinkage in the scope and spending of the state: this is the neoliberal consensus that continues to grip politics across the continent. Donald Trump has become only its most racist and authoritarian expression; Trudeau its most glossy and beguiling. […]

[…] Those of us who anticipated and warned that Justin Trudeau would continue such policies were shouted down. But privatization, deregulation and downsizing in the scope and spending of the state: this is the neoliberal consensus that continues to grip politics across the continent. Donald Trump has become only its most racist and authoritarian expression; Trudeau its most glossy and beguiling. […]

Excellent site you’ve got here.. It’s difficult to find quality writing like yours nowadays.
I seriously appreciate people like you! Take care!!