Here’s a few more notes on a point that seems to be made with increasing frequency: working for a wage has always been precarious. The current focus on precarity as a defining feature of our age is not unwelcome; indeed, its popularity shows that it clearly harmonizes with the everyday experience of many. The question is whether that everyday experience is so new; can a focus on precarity as novelty be crowding out important features of the transformations we’re seeing and what we can do about them?

Perhaps most generally, precarity is what it means to have nothing to sell but your labour power, to use Marx’s turn of phrase. Taken in this sense, precarity is wide-spread: today, the bottom 40% of Canadians today own a measly 2% of national wealth and the bottom 60% own just over 10%. The fact of owning relative peanuts gives precarity an important part of its meaning – it’s certainly nicer to live in a rich country, but the “outside option” remains the wage with all its attendant risks.

The fight against precarity is also the foundation of the welfare state. The welfare state provides a social wage in addition to the working wage and thus undermines precarity. Its genesis was an experiment in social compromise. On the one hand, it gave workers greater security – a springboard to potentially fight for more. On the other, it gave elites a tool to manage labour unrest, especially the wave coming out of the late 19th and early 20th centuries, and the means to incorporate workers into new cycles of accumulation. For now, however, this experiment is sputtering. The last several decades have seen the breakdown of the compromise and, perhaps unsurprisingly, have brought precarity back to the fore, if for now in a more limited sense.

An argument along these lines is crystallized and developed in greater detail in a recent article by Kim Moody. It’s a rare piece because it takes seriously the empirical data that shows modest rises in what most people consider to be precarious work, while at the same time building a broader perspective on precarity that links the present with the past. His comments, while based on the UK experience, apply more generally across Northern economies and are worth quoting at length:

That precarious work has grown in the last thirty years is undeniable…as the economy and output grew in the 1980s and unions experienced defeats, employers increasingly hired ‘temporary’ workers in the name of ‘flexibility’, rather than permanent full-time or part-time workers…

Overall, according to both ONS and CIPD surveys, 70% of the workforce are full-time permanent employees, 20% are part-time permanent, and 10% are ‘casual workers, and self-employed and agency workers in atypical employment relationships.’ Permanent does not mean ‘life-time’ and never did. Nevertheless, job tenure has not changed much since the 1970s. The average length of job tenure for the whole labour force is about 8 years for women and 9 for men in 2011, with a majority having been employed for five or more years and 85% for more than two years. Thus, while precarious work is more prominent today than thirty or so years ago, it is not the most common type of employment and directly affects only a minority of all employed workers. And, perhaps surprisingly, it is more concentrated in the public sector, where union membership is at its highest.

…Nevertheless, 90% of Britain’s workers have ‘regular’ jobs that last a number of years. The work of those jobs, like that of the more precarious ones, however, has become more intense and stressful in the wake of lean production, ‘new management methods’, frequent reorganizations, bullying, increased surveillance, and competition. In addition, on average they pay less today than in 1973, with wages rapidly falling even further in the last three years, hitting workers ages 20-29 hardest.

The major transformations we are witnessing are not just (or even primarily) in how work contracts are organized but how work itself is organized – its speed, the way tasks are assigned, how production (whether of goods or services) is managed, and so on. The system of just-in-time production – while still reliant on large-scale investments in some goods sectors but not necessarily so in others or in services – has its own specific, internal precarity: flexible production that at the same time creates and demands flexible workers. Canada, for instance, has seen an increase in the size of its tradable goods and services sectors, particularly tradable services, since the adoption of a series of free-trade agreements, notably NAFTA. This has opened more jobs to international competition and attendant pressures.

There is a concurrent removal of the anchors that characterized the attempts at managed post-war capitalism. You don’t need to become a contract worker to lose your defined benefit pension; it can be bargained away by your boss. In fact, this is what has happened in Canada and elsewhere. Similar things are happening at the level of the state: eligibility for unemployment benefits, for example, has been slashed to the point that less than 40% of the unemployed in Canada currently receive benefits. Both of these increase precarity without necessarily changing the kinds of contract governing employment.

In some ways, the sense of growing precarity seen as a rise of contract and temporary work is an epiphenomenon of renewed attacks on workers’ rights generally. It could also be reflective of what Moody characterizes as a struggle that has not yet recognized and internalized the changing circumstances in which it is fought.

The practical and political question that emerges and that Moody highlights is how to address precarity through worker’s organizations. Take one Canadian example. Here, as in the UK, the public sector is both a last bastion of extensive trade union coverage. In Canada, while temporary employment increased from 11% in 1997 to 13% in 2014, the percentage of union members who are temporary workers increased by half: from 8% in 1997 to 12% in 2014. This most likely reflects the same process that was evident in the UK, where the unionized public sector saw a disproportionate rise in narrowly-defined precarity. 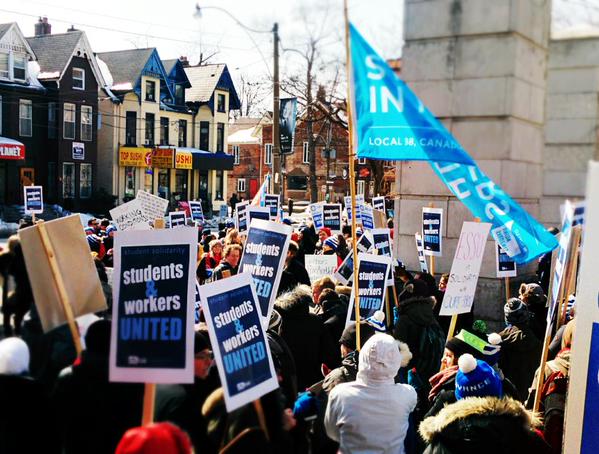 The strikes on now by TAs and other contract academic workers at York and the University of Toronto are a good example of push-back against this transformation. Universities are a prominent example of where public sector contract work has expanded rapidly, with estimates that 40-50% of undergraduate teaching is now done by temporary staff. In some sectors, the change towards full precarity has been severe, if localized. Graduate students that make up the pluarality of these two unions currently on strike are fighting for the future of more secure work in their sector.

On the other hand, take the BC health care system where wide swathes of support services have been are subcontracted to private firms. Existing contracts were broken (with the help of trailblazing union-busting legislation) and workers rehired at lower wages and worse benefits under new employers. Despite this, support workers continue to have permanent positions and large numbers were able to re-unionize, albeit under the far worse, new conditions. Their contracts continue to be broken as contractors change and pressures for concessions are executed, but precarity here has a different, albeit just as real, meaning.

It is trite to say that there are no easy answers, but, if Moody is right, our practices are always somewhat behind the times and we are only starting to grasp at the answers. What is more certain is that precarity as rallying cry needs to be broadened – universalized to fit with the numbers and everyday experience.

3 replies on “Some notes on precarious work”

How to overcome precarity? The LAEP may provide some useful means… See: http://revistadireito.unb.br/index.php/revistadireito/article/view/18/51

[…] not just that jobs are more temporary—in fact, the amount of the actual temporary work may barely be rising—they are generally crappy. And the Liberals will not do the one thing that would help the most: […]