With the Ontario government seriously considering raising the minimum wage thanks to the tireless organizing efforts of the $15 and Fairness campaign, the labour movement and thousands of supporters, the business lobby is out fear-mongering in force. Here is a tool for the rest of us to fight back. It’s a collection of 5 myths and facts about raising the minimum wage: clear arguments for why $15 an hour is right for Ontario workers and the Ontario economy. This is an edited version of a section prepared for the Rank and File $15 and Fairness Now! An Organizer’s Handbook for Building a Movement.

FACT: There is resounding evidence that raising the minimum wage is not a job-killer. Economists doing cutting-edge studies have found that the typical minimum wage increase does not cause major overall job loss. “Job loss is more of a threat than a theory.” For instance, the threat that robots will take our jobs has been made for over 200 years and full-time work is still 40 hours a week or more! The argument that jobs will be shipped offshore fails similarly. As much as business tries, it’s not yet possible to move a barista job halfway around the world. There are still so many jobs that require human labour.

A $15 minimum wage would pump billions of dollars into the pockets of low-wage workers and thus the Ontario economy. Jobs would be created as a result of the new economic activity, compensating for losses incurred by businesses that can only function on poverty wages. As the minimum wage goes up, workers become more valuable to businesses and jobs generally get better. Economists have found that when the minimum wage rises workers get more training and there is less turnover. Businesses put more energy into raising efficiency rather than keeping tabs on workers in poverty. And wages tend to become more equal: wages for managers and other high-paid workers don’t go up as much and businesses spend proportionately more on the lowest-paid.

Most importantly, potential job losses are not the only thing we should care about when the minimum wage goes up. Less poverty, better jobs, higher incomes for the lowest-paid — all of these would far outweigh the impact of a minimal job loss. 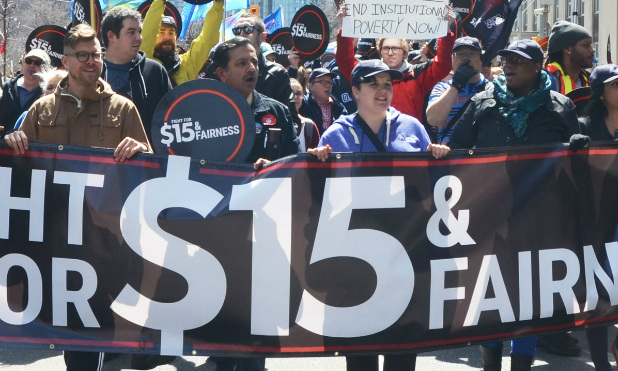 FACT: Don’t let the business organizations scare you: currency gyrations, oil price shocks, and many other economy-wide factors have much bigger impacts on prices than a fair minimum wage. The last few decades have seen a shrinking share of the economic pie going to wages (especially the wages of the 99%), while the share going to profits grows. Slightly lower profits are just one source to make up for slightly higher wages.

The perfectly free markets of Economics 101 are a myth like the arguments the business press comes up with about the minimum wage. In the real world, companies have significant flexibility in setting prices. McDonald’s or Loblaws are huge players who are not just passively responding to “the market”. So while wages are a cost to business, there is no necessary connection between this higher cost and higher prices, especially if wage increases result from greater worker bargaining power and a more balanced relationship between workers and business.

The numbers back this up. A recent study from the University of California, Berkeley looked at what would happen if New York state raised its minimum wage to $15. It found that any price increases resulting from the higher minimum wage would have a small impact on the normal rate of inflation, adding up to a few tenths of a percentage point. Similarly, cities in the US that have already raised the minimum wage haven’t seen any of the inflationary doom and gloom spread by Bay Street.

FACT: The local economy benefits the most when the minimum wage goes up. When workers who were struggling to make ends meet get a raise, they immediately put their wages to work where they live. With a raise, more and better groceries are suddenly affordable, as is going out to that new restaurant around the corner or an after-school program for a child. Workers benefiting directly from a higher minimum wage are going to spend locally to improve the quality of life for them and their families. A low-wage economy doesn’t just leave workers in poverty, it also suffocates small businesses that can’t afford to cut costs when competing with major corporations.

Not that long ago, child labour was an accepted business practice, but we decided collectively that we do not condone it and business had to adapt. An economy cannot work if more and more people are in poverty. While workers need businesses for their jobs, don’t forget that businesses need workers to buy their products. The 15 and Fairness campaign is a way of saying loudly that paying poverty wages is not a sustainable business model.

A higher minimum wage can produce a vibrant local economy. In Seattle, where the Fight for $15 has been successful and the first substantial wage increases have already come into effect, total wages and employment for low-wage workers went up, and the local economy has flourished.

MYTH #4: Economists are united in their opposition to minimum wage increases.

FACT: While the Chamber of Commerce or CFIB continues to beat their cartoonishly business-friendly drums, many economists are speaking up for low-wage workers. Just a few years ago, over 600 US economists — including seven Nobel Prize winners — signed a letter supporting higher minimum wages, saying they wouldn’t harm the economy.

While it comes down to all the arcane statistics, you don’t need a PhD to see what has happened. Older studies, including Canadian ones that continue to be cited by business-friendly economists, have used out-dated, heavy-handed methods. They failed to isolate minimum wage increases from the bigger booms and busts that affect the economy. A new crop of studies has corrected this mistake and found no clear link between minimum wage hikes and job loss or economic doom. The debate is not a false one between hard-nosed economics and feel-good politics. Today’s economy is struggling to generate enough demand, and economists have said that raising the minimum wage is one good way out of the funk.

Myth #5: $15 minimum wage sounds good but it will never happen.

Fact: The Fight for a $15 minimum wage has already achieved numerous victories. In the United States municipalities like Washington D.C., Seattle, Sea-Tac along with states like New York and California have passed laws raising their minimum wage to $15. In Canada, Alberta has committed to raising its minimum wage to $15 an hour. In total over 17 million people in North America have seen their wages directly or indirectly positively impacted by the Fight for $15 movement.

The movement has faced major opposition from governments, large corporations and rightwing think tanks. When workers stand up together and organize they have shown they can beat the opposition and win a $15 minimum wage. There is only one inevitable fact in the fight for a $15 minimum wage: if we don’t fight, we can never win.

If labour costs rise, someone has to absorb them*. Why would businesses cut their margins when they have many ways of passing costs on to employees and consumers? And if they don’t do that, there are all sorts of methods they can use to reduce costs elsewhere: layoffs, delay new hires, postpone wage increases for existing employees, reduce hours, invest in labour-saving devices, etc. You will note that these all have undesired negative consequences for workers.

The idea that firms will eat this increase in factor cost assumes that they somehow won’t notice or won’t care when their profit margins fall. This is unrealistic.

* The exception is when the market wage for all jobs is already higher than the minimum wage, where the final outcome is basically nil. Of course if this is the case then the “benefit” of the new minimum is nil as well.

I would like to know what the leader of the chamber of commerce get paid and asked if he could live on 11.40 per hour or could he live on 15 dollars per hour

[…] minimum wage will kill small enterprises, destroy jobs, and shoot up prices. If we heeded these cooked-up theories, minimum wage would still be $1.30 an […]

[…] minimum wage will kill small enterprises, destroy jobs, and shoot up prices. If we heeded these cooked-up theories, minimum wage would still be $1.30 an […]