I know it’s been a bit quiet on the blog this summer, but that’s in part because I’ve been doing a bunch of writing elsewhere. Here is a quick summary of what I’ve been up to.

In the run-up to the UK election, I wrote a piece for Jacobin on one of the most important parts of the Labour manifesto: the pledge to pursue “alternative models of ownership“, including re-nationalization and co-ops. The entire manifesto was excellent and really shifted the momentum towards Labour, and even if this plank was less discussed, it will be crucial to building a 21st-century left economic policy. This article will be included in an upcoming free Verso e-book on the election and its aftermath; look out for that!

I also wrote a long-ish piece for the CCPA’s Monitor, exploring themes in In the Long Run We Are All Dead, Geoff Mann’s excellent new book on Keynesianism. The book itself is an extended mediation on themes of liberalism and revolution, tracing strands in Keynes back to Robespierre and Hegel (!). I try to situate this history of thought in the present moment and, in doing so, also draw on some examples from Three Worlds of Social Democracy, a collection of essays on the fate of social democracy across the globe, edited by my friend Ingo Schmidt. I highly recommend both books.

In other news, I now have a regular column in the venerable left publication, Canadian Dimension. The first one lays the ground for the themes I want to explore: “Questions of control and decision-making, the kinds of big questions Joan Robinson raised back in 1943, should be front and centre. A belief in democracy that extends to the economy and a readiness to popularize left economics — that’s my starting point for left economics and for this new column.” The second column, hitting newsstands this week, takes on some outdated economic myths of Canada in light of the 150th.

Finally, in more local news, I have helped launch a couple progressive economics initiatives around the big win by Ontario’s Fight for $15 and Fairness, which has successfully pressured the provincial government to introduce legislation raising the minimum wage to $15 and improving labour standards. The main piece was an open letter from economists in support of $15, signed by 52 colleagues across the country, including two past presidents of the Canadian Economics Association. It has been widely cited in the public debate, helping shift it away from business-led fear-mongering. Alongside the letter, Craig Riddell, Lars Osberg, Jim Stanford and I co-authored an op-ed for the Globe and Mail detailing the tectonic shift in the economics profession around the minimum wage. 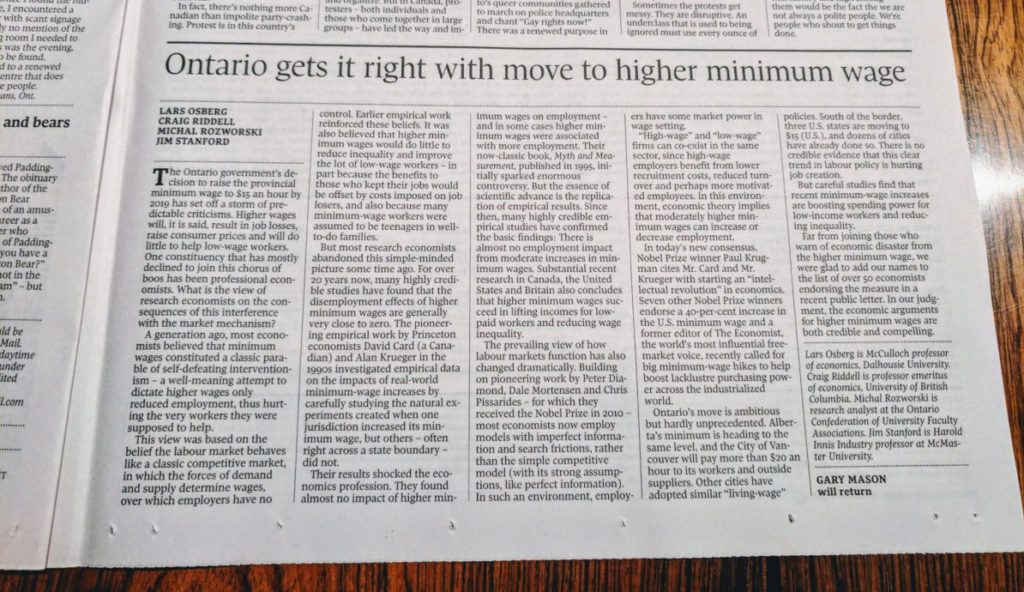 Most recently, I have written two additional pieces pushing back on a flawed, skewed and irresponsible report on the minimum wage commissioned by the Ontario Chamber of Commerce and its allies. It makes the predictable claims using predictably inflated numbers based on predictably bad assumptions. It also appears to include an openly misleading claim around price increases to stoke additional fears. The first piece, co-written with Zohra Jamasi of the CCPA, is up on the CCPA’s Behind the Numbers blog; the second is a shorter follow-up of my own.

One thought on “Summer writing round-up”