This week’s podcast focuses on two numbers, one million and fourteen, that draw out some interesting links between economics and politics in Ontario and beyond.

END_OF_DOCUMENT_TOKEN_TO_BE_REPLACED

Today, I’m happy to present another extended interview and my guest is Linda McQuaig. Linda is a National Newspaper Award-winning journalist and commentator who has worked for the Globe and Mail, National Post, Toronto Star and many other outlets. She is also a best-selling author of numerous books that have focused on and popularized a host of economic issues. Her most recent book, co-written with Neil Brooks, is The Trouble with Billionaires: How the Super-Rich Hijacked the World and How We Can Take It Back.

Just last week, Linda wrote a sharp piece critiquing Tim Hudak’s platform in the upcoming Ontario election. We discuss this article and Hudak’s plans in the first half of the interview, while moving on to more general questions centered on the topic of rising inequality in the second half.

It’s election time in Ontario and that means graphs and statistics, facts and factoids, some stale, some new come out of the woodwork. Take the tweet below as an example, one that riffs on the old theme of an exploding public sector encapsulated in Tim Hudak’s promise to cut 100,000 public service jobs:

Hudak promises to cut 100K public sector jobs (with education bearing the brunt). I put together this chart. Discuss pic.twitter.com/aNJjz5tiJ1

Let us even take the author’s word that he is non-partisan and found some seemingly interesting data; the focus is the chart, not him. There are two issues. The first is much simpler: the graph is a misportrayal. It uses data from a Statistics Canada sample-based survey to proxy for teacher employment and population data to proxy for student enrolment. While using proxies for missing data can be acceptable and justified, in this case, there is absolutely no reason for it. Both teacher employment data and enrolment data are exhaustively compiled by Ontario’s Ministry of Education. Here is the same graph with correct data: 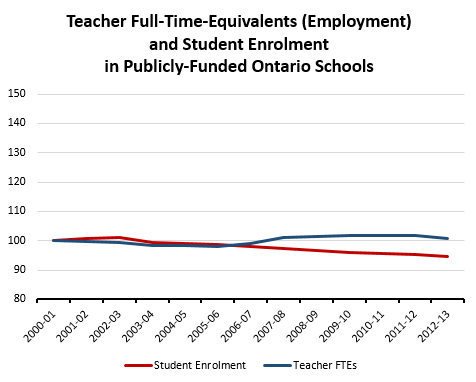