Similarly, the right has not been shy of drawing the comparison between education and natural resources. Here’s the Canadian Taxpayers’ Federation directly linking the government’s claim of a funding crunch with BCTF opposition to Northern Gateway and other fossil fuel projects:

Why would the teachers’ union pass a motion against the Northern Gateway pipeline, which would generate $1.2 billion for taxpayers over its first three decades in operation? How could that possibly serve the interests of its members, who want higher wages and smaller classes — things that revenue could help address?…Why would the teachers’ union oppose the Kinder Morgan pipeline proposal, months before any plan had been released?

First the obvious: unions are democratic institutions reflective of their members, who given that most British Columbians are opposed to pipeline expansion are most likely to share this opinion (if anything BCTF membership will be skewed towards pipeline opposition from the general population). Going further, these rhetorical questions castigating a lack of belief in the economic miracle that is the fossil fuel pipeline business are a good point to bring up the minor controversy that erupted over Kinder Morgan’s inclusion of oil spill clean-up costs in the benefits stemming from its application to drastically increase the capacity of its tar sands pipeline. At the time, some economists complained about the use of economic impact analysis to make this argument, precisely on the grounds that it makes virtues out of vices.

On the other hand, this method in ways merely reflects how the predominant measure of economic well-being, namely GDP, functions. A dollar is a dollar in terms of economic impact and GDP alike. While it may seem incredulous to add the generally inadequate clean-up measures resulting from the clear environmental harm of an oil spill to a pipeline’s economic justification, it captures something important about economic accounting.

Consider, on the other hand, the actual benefits potentially stemming from a just resolution of the teachers’ strike: better quality of education from smaller class sizes, more attention to special needs children and a stronger bargaining position for all public sector workers (real people doing hard work). An economic impact analysis of this seems outlandish because of the way we’ve become accustomed to thinking about the public sector. Much easier to hem and haw over the cost of lost classes due to the teachers’ strike, which are currently calculated at over $168 million if the strike lasts until the end of the month:

This shows the poverty of popular economic categories and language. Environmental harms like an oil spill are easily recast as economic benefits, while it is difficult to think of the public sector as anything but merely incurring costs – costs that service disruptions then save. Indeed, the socialized sectors of the economy (whatever one thinks of their optimal extent) are treated differently. While a dollar is a dollar, different kinds of spending are differently represented in our collective economic imagination, in no small part due to efforts of those like the CTF.

Ironically, what makes the attack from the Taxpayers’ Federation odd is that most mainstream neoclassical theory of economic growth puts high importance on education (or, as economists call it, human capital formation) for being a driver of growth. While competing neoclassical growth models treat education differently, it remains a key element in most. Indeed, childhood education is also the foundation for further growth boosts stemming from productivity gains that arise from learning-by-doing and small refinements to production processes that happen every day.

In fact, taking this a step further would mean recognizing the collective responsibility we share for increasing living standards that end up being shared out extremely unevenly. Instead, our culture celebrates private innovators, while the work of untold millions who actually create most innovation through small steps counts for naught. Similarly, collective production of services that form the basis of society – the few that are left unprivatized – is seen as a drag on a mystical private-sector economy. In BC in particular note that, ironically, resource extraction projects are celebrated despite being not exactly high-technology, high-employment and productivity-enhancing (especially in light of accelerating climate change that risks, given enough popular resistance, making these sectors obsolete). 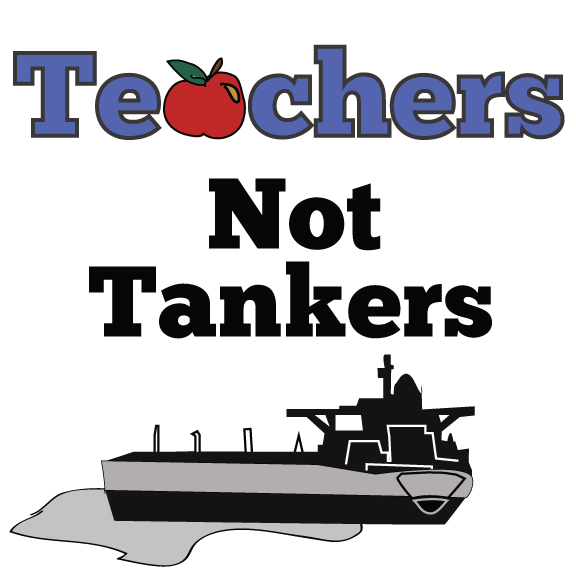 Teachers’ unions are at the intersection of a number of axes of struggle: that over public services, that over gendered work, that over large-scale bargaining power. They are a remaining bastion of large-scale unionism that is unafraid to use the strike as a means of expressing a collective defence of public services – see public support for teachers not only in BC but also Chicago, Portland and other examples from the US and beyond.

The juxtaposition of teachers and tankers in BC thus goes much further than just a discussion of spending priorities in the here and now. The current conjuncture in BC is a good time to good opportunity to start talking not only about economic priorities, but also about how we talk about priorities and our collective good.