As the teachers’ strike continues, the BC Liberals have turned to an old stand-by: fear-mongering that they will have to raise taxes if they are to fund a settlement that includes key demands like class size and composition limits. Ignore the fact that the government has shown itself consistently unwilling to even consider any such settlement; ignore also that there is nothing inherently evil about taxes. Even taking the government seriously here, there’s one source of education funding that the BC Liberals aren’t talking about, the carbon tax.

While debate rages about whether BC’s carbon tax is regressive or progressive, there is another aspect of the tax that has not received enough attention: the carbon tax has been used to actually justify cutting taxes by stealth. Indeed, the additional tax cuts being made under the cover of the carbon tax are estimated to amount to an average of $293 million per year for the next three budgets, according to the government’s own projections. That’s more than enough to fund the projected annual cost of class size and composition limits, projected to be $225 million per year. 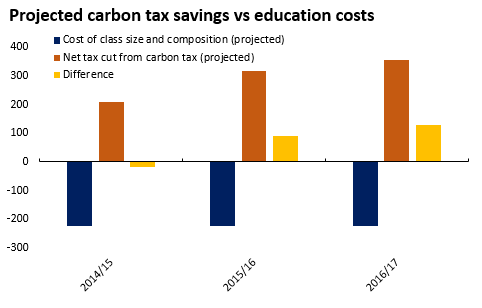 The BC Liberals have pushed the carbon tax as a revenue-neutral measure. This means that all the tax collected in the form of the carbon tax is supposed to be offset by tax cuts elsewhere. Whatever our opinion of the carbon tax itself, the government has consistently overshot how much it cuts taxes to make up for collecting carbon tax revenue – and this overshooting has consistently been in the tens and hundreds of millions of dollars, or 10 to 20 percent of carbon tax revenues. Not learning from the past, the government is budgeting overshooting to continue into the future. END_OF_DOCUMENT_TOKEN_TO_BE_REPLACED

My guests today help take a fresh look at two issues where British Columbia is on the front lines of bigger social conflicts: that over the future of public education and that over resource development on First Nations lands.