This week the field of battle moved out of the stuffy rooms in Brussels into the streets of Athens and other cities in Greece. Sunday will be a test of how far the Greek population has been mobilized by forces of the left. Given a choice between further recessionary measures to fund debt repayments amidst an ever deeper depression seemingly without end, it is no wonder that the No vote stands a fighting chance. This despite a concerted media campaign and transparent blackmail on the part of European political figures.

The Greek media, whose ownership is extremely concentrated among the business elite that has much to lose from renewed radical social mobilization, have been a major part of the Yes campaign. European politicians of all stripes, including nominal social democrats, have called on Greeks to vote Yes, playing up confusion and offering stern warnings. Martin Schulz, the President of the European Parliament from the German SPD, for instance called on a change of government in case of a Yes vote without seemingly batting an eye. Countering this, has been a left presence in the streets that has by many accounts been revitalized by the sudden opening provided by the referendum.

Alexis Tsipras’ speech at the Oxi! rally on Friday, July 3.

That Greece is holding a referendum, that it has imposed capital controls and that its economy’s slow strangulation has gathered pace are the marks of a fundamentally political rather than economic crisis. This remains the basic lens. It isn’t to say that there is no economic crisis—one has been ongoing across Europe in various guises since the fallout from the 2008 crash—but that this week politics clearly dominates economics. Or put differently, economics is at the service of politics whether in the guise of frozen emergency liquidity to Greek banks on the one hand or the decision to pay pensions rather than the IMF on the other. The broad strokes of this post reflect the big, broad political exigencies.

There is no good outcome for Greece at this point, but it is clear that all Europe can offer is a cycle of endless austerity, economic depression and appeals to let the technocrats take over. The referendum process is unclear, but the political divide it has exposed has exceeding clarity: few understand the question, but most know exactly what the vote is about. The difficult question is what to make of the vote results. Where does the mobilization lead if Oxi carries? Is it to renewed negotiations as Tsipras, Varoufakis and the main current of Syriza contend? Or does it leave Greece moving further towards breaking off economic (and political) ties to the Eurozone and the rest of Europe? 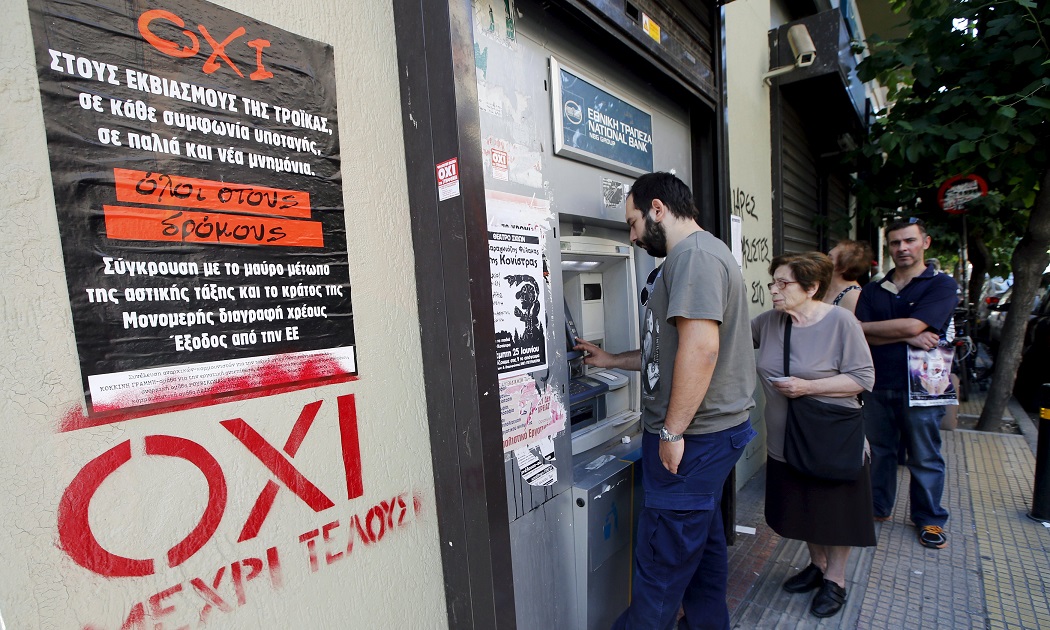 The main economic question that has returned with a vengeance is the debt. A partial default or radical restructuring within the Euro is an economic outcome that would do the most to save Greek capitalism from being further hobbled by austerity in the service of further debt repayments. Varoufakis is right that this gives Greece the best chance of restoring investment and growth along the old, pre-crisis, pre-bubble path. The problem is political: negotiated debt restructuring looks to be off the table for now. A unilateral default within the Eurozone, while technically possible, also appears remote. The rules are being made up as things move along, but they are not being made by Greece or those friendly to it. Is the confidence of Tsipras that Oxi will allow for debt to be included in a potential new deal realistic?

If the crisis has always been political, then the political stakes of the referendum have moved to a new level. The threat from the far right that has been growing across Europe, most violently and visibly in Greece with the fascist Golden Dawn, is now openly being tested by the European elite. The extent of economic destabilization has been immense. The banking sector is on the edge and at the mercy of emergency funds from the ECB. Although people like German Finance Minister Schauble say the risk of default is fully priced in, surely the financial sector across the world is busy this weekend revising its bets. Financial markets are based on confidence and trust, both of which are being sorely tested.

The difficult question for Syriza if a real rupture happens will be how to sustain a war economy for months, not days or weeks. Months are what it would take to implement a new payments system, to reprogram a modern financial infrastructure, to re-establish financial links with Europe and the rest of the world and regain access to international markets. In the meantime, food, fuel and medicine would need to be rationed. These are technical problems to which there exist solutions, but they will take place within a political context of anger, confusion and destabilization far greater than anything this week—and would require popular support building on that made plain this week to be sustained.

Notes on how we got here

(1) The difference from January has been that there is a political force in the small country most affected by the crisis that wants to ever so cautiously break with the austerity that Europe-wide elites have opportunistically doubled down on since the crisis exploded. This austerity, in the most basic terms, is part of a project of the 1% to continue its upward redistribution by any means. This isn’t the economic stupidity of elites as some would have it, but a strategy—one which can still do better or worse. Greece is being made into an example doubly: first, to show that austerity is the economic policy within Europe today and, second, that austerity cannot be stopped via a popular, democratic will.

(2) That said, this is not a political conflict between nations, as its often presented. One of the most pernicious misrepresentations is that there is a single block of “creditor nations”, that this is Germans versus Greeks. European integration via the Euro has led to huge imbalances. Germany has been outcompeting other European countries by keeping a tight lid on wage growth, keeping exports high and raising productivity above the level of overall growth. This has led huge capital flows from Germany and other core countries out to the periphery where the opposite was true: growth was high but productivity and exports lagged. Yanis Varoufakis himself has been one of the best at chronicling and analyzing this.

The labour share fell in Germany fell by more than anywhere else in Europe; ordinary Germans suffered from the same process that ultimately left Greece with a broken economy. It’s an ideology and a mythology that sees the Greeks as scapegoats to a systemic crisis. A strike wave that has only now slowly started building in Germany, concentrated in the service sector, may yet start to challenge the dominant narrative in Germany, but it is coming late and the possibilities it opens are still uncertain.

While Greece took on unsustainable debt, there were many, many lenders from the core of Europe happy to lend, ignoring risks and the consequences of the growing imbalances. Greece had the bad luck of seeing capital flows pump up a public debt bubble—the most politicized of all. Others suffered in different ways: Spain had a real estate bubble, Ireland and Iceland had financial sector go bust. As should be well-known by now, rather than share the pain with Greece, the private lenders on one end of the public debt transaction were fully bailed out back in 2012 while the public Greek borrower remained on the hook, but now to public rather than private bodies. More than 90% of the bailout funds Greece has received from the Troika have gone to repay lenders rather than restart the Greek economy.

(3) What the negotiating line followed (for better or worse) by Tsipras and the main faction within Syriza has shown is that even a relatively mild Keynesian reform program is not palatable. Remember that Syriza offered to cross some of its red lines, implement 8 billion euros in new austerity measures (even if a left austerity) and still couldn’t get debt restructuring on the table except in some nebulous future, and even then only in the very last-ditch proposals.

This is made even clearer by the fact that any budgetary measures based on breaking with the corruption and clientilism of the Greek state—much more plausible coming from outside all the old power structures—were tossed aside by the Institutions. A more efficient capitalist state may not the mark of a radical left, but it is the hallmark of the best of a fading social democratic tradition (if somewhat utopian): tax the rich, treat them as equal before rather than above the law and rebuild a state for the people rather than elites. At their best such measures could have helped form the basis for breathing room to build popular support for more radical measures. Whatever one makes of this storyline, it’s also primarily political: lenders not only had little trust in anything but actual cuts, but were also attuned to the political implications of a different tack to raise revenues.

(4) Finally, there is the debt itself, which until the last minute and beyond has never been the topic of serious negotiations. After six years of reforms that have gone deeper than anywhere else in Europe—the average retirement age is up, pensions are slashed, labour law inexistent—a full-blown depression and a debt that keeps piling up relative to a crashing GDP.

Much is made of the fact that the IMF itself has admitted not only that austerity isn’t working in Greece (already in 2013), but also, just this week, that the Greek debt is unsustainable. While this is a crack in the determined face of the Institutions, it is still even today much smaller than what it seems Syriza imagined it could exploit in negotiations. Reading more closely, the IMF has come to its conclusion because there is no political force determined enough to implement the austerity measures that would create enough revenues to pay off the debt. Bad economics meets politics meets social reality.

To say nothing of the historical reality that debt forgiveness and restructuring has been common. The most pertinent example is post-war Germany, which had its debt restructured in the 1950s with Greece writing off half of what it was owed.