Since her common-sense quip that most of Canada’s tar sands reserves will have to stay in the ground, Linda McQuaig has been vilified by much of the political establishment and (rightfully) defended by a minority of voices in the media. That the facts of climate science vindicate her has made little difference to the debate. Is this because McQuaig’s comments have inadvertently scratched at a nerve that goes far deeper?

In what would be a world very different from our own, we can imagine a fairly straight line going something like this

First, climate scientists tell us that 85% of tar sands reserves (given how high-cost they are) will most likely have to be left in the ground if globally we are to limit warming to two degrees. In response, the Canadian federal and provincial governments slowly stop subsidizing oil development, stop funding oil-related infrastructure and prepare for industry phase out (by for example, increasing royalties as extraction nears a limit). Next comes a big push for developing green projects, whether funded through direct spending or incentives. As the oil jobs and industries wither, new green jobs, new green industries and compensating income transfers take their place. Voila: just transition level unlocked!

Have a laugh first, then ask, where is the major stumbling block between this make-believe world and our own? For now politicians are acting and being berated for differing at the first step: brushing off the problem and effectively denying the climate science. Yet beyond Petroleum Correctness is a set of increasingly onerous political and economic constraints.

As if on cue, just this week, two big reports were published, one by the Canadian Labour Congress on possible just transition policies and the other by Canadian Centre for Policy Alternatives summarizing a six-year climate justice project. Very good ideas are there for the taking.

A just transition could see the state create green jobs and raise incomes for workers in some sectors directly. There is then hope for spill-over effects on incomes elsewhere. Fiscal stimulus can even lay the groundwork for more generalised reductions in household debt. Unlike interest rate cuts on the agenda today, public spending could start to rebalance the economy away from fragile, credit-fuelled stagnation. As Nathan Tankus wrote recently in a provocative article, to inflate away workers’ debt burdens it’s not enough to increase price inflation, but to create and raise wage incomes. 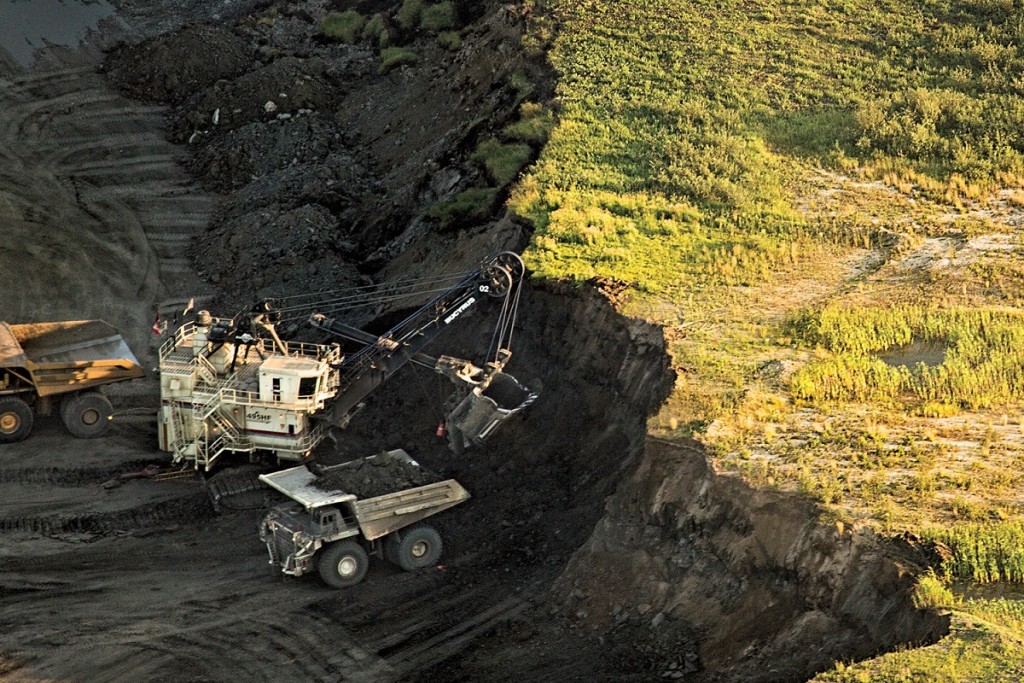 It’s all too “easy” to overcome mere fear of fiscal policy and lack of alternatives, yet such solutions are not being taken up because the problem is not just one of ignorance. In fact it’s a sad irony that fossil fuels are one of the few economic means that can support social democracy and massive fiscal redistribution today—see Norway, Bolivia or Venezuela. As elsewhere, capital in the tar sands does not have a credible threat to leave anytime soon (even if the pace of investment is slowing).

Here’s something from a story on the latest financial results from Suncor, one of the large tar sands producers:

Suncor Energy is trimming its spending plans for this year by a further $400 million, while at the same time boosting its production targets and dividend… As of April, 1,200 jobs have been cut at Suncor… CEO Steve Williams said Suncor’s cash flow is strong enough to fund its capital requirements, while boosting its dividend by a penny to 29 cents a share and renewing is share buyback program.

This shows the lie behind the claim that supporting the oil industry is all about a defense of jobs. The balance tilted ever more towards the rentiers (those who own large amounts of capital and are the beneficiaries of the higher dividends and buyback) and away from workers. That one penny more in dividends this quarter is intimately connected to the 1200 jobs less.

The price of oil is surely driving what happens to the Canadian economy but it resonates and is amplified by a shifting balance of power within society. Alternatives that shift in the opposite direction are not reviled for their scientific content as for their economic implications. It’s much better to keep going along the same path which today means more fossil fuels. Rather than an opportunity to consider alternatives, the crisis is an opportunity for elites to get lean and raise efficiency. It’s not all in our heads: there are constraints on pursuing alternative economic policies.

Getting at these constraints is hard and cannot be won on argument. Here’s what Jeremy Corbyn, who has quickly overtaken the lead in the UK Labour leadership race, has been saying about the privatized but still-cherished railways:

Like a majority of the population and a majority of even Tory voters, I want the railways back in public ownership. But public control should mean just that, not simply state control: so we should have passengers, rail workers and government too, co-operatively running the railways to ensure they are run in our interests and not for private profit. This model should replace both the old Labour model of top-down operation by central diktat and Tories favoured model of unaccountable privatised operators running our public services for their own ends.

Take another example: Vancouver just held a transit referendum where the right was able to effectively use arguments about a lack of democratic representation to stifle new transit investment. Rather than running away from or delegitimizing this democratic impulse, there is an opportunity here. Talking about a green transformation means organizing while open about real economic conflicts and divisions with the aim of getting beyond them to figure out who are the opponents not just of scientific consensus but of economic transformation.

Linda McQuaig said some of the oil in the tar sands will have to be left in the ground. She was right, of course, but to get to the source of the vehement reaction she touched off means looking beyond the climate science. She scratched some deep nerves that get to the heart of the question of who the economy works for.

One reply on “Linda McQuaig is right, but there’s more to it”

[…] key role in keeping the oil in the soil and building the political will to develop a green economy. In fact, taking the tar sands on is exactly how labour is going to take on who really runs the econo…. This is the discussion the Canadian establishment does not want to […]