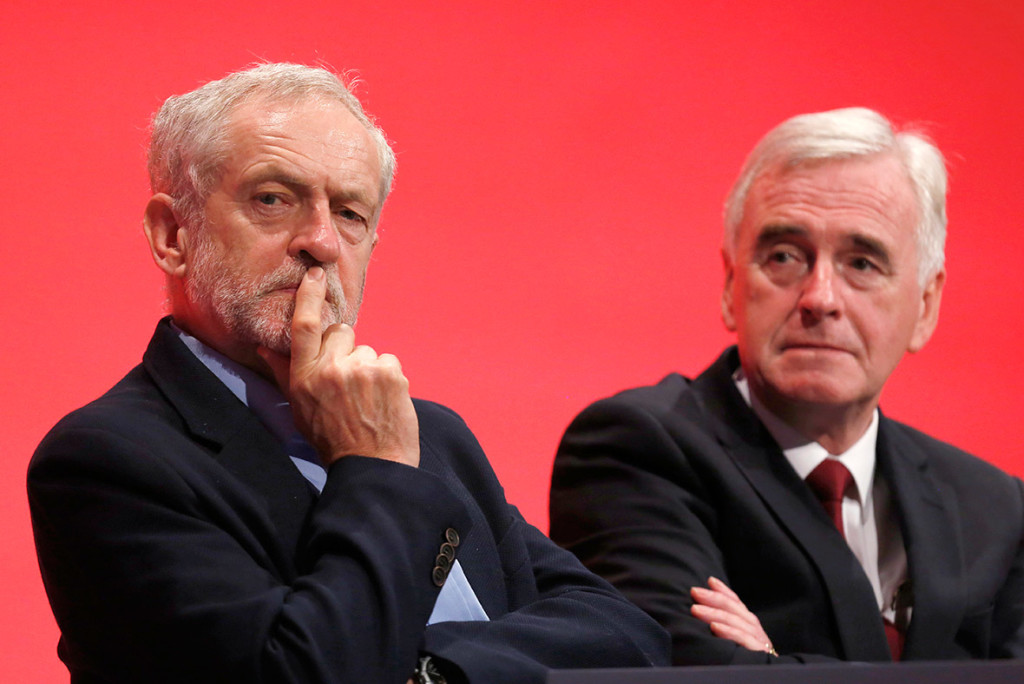 The new Labour “fiscal rule” introduced by Shadow Chancellor John McDonnell seems conservative at first glance because it rules out deficits over a rolling five-year period—but take a closer look. Here’s a summary from Paul Mason:

There are major differences between this and the NDP’s short-sighted and damaging policy to not run deficits from the 2015 election campaign. First, Labour is proposing that a government must have a plan to balance the books over a five-year time horizon and can run deficits in the meantime, rather than always ruling out deficits. Second, the Labour rule doesn’t apply to deficit spending on infrastructure. Borrowing to invest is always allowed. Third, and perhaps most importantly, Labour’s new policy doesn’t apply to periods of crisis.

Specifically, the rule is suspended when interest rates are stuck near 0% (at the “zero lower bound” or ZLB), as they are today across much of the global North. At the ZLB, when monetary policy is failing to restart the economy, McDonnell’s rule states that fiscal policy must act aggressively in concert with the central bank’s actions to reboot demand and restart the economy.

These crisis provisions are important. As the Bank of International Settlements recently showed, very loose monetary policy at the ZLB, acting alone without fiscal policy, can exacerbate inequality. Low rates, quantitative easing and the like inflate the prices of assets like housing and stocks. Because these assets are already very unequally distributed, the increase in prices only makes existing inequality worse.

We can interpret Labour’s new fiscal rule as just another example of responsibility rhetoric, of the left taking on the right’s messaging, or as a more serious attempt to craft a left economic policy for the contemporary situation. I’m not fully convinced, but inclined towards the latter. Here’s Paul Mason once more, concisely explaining the aims of the rule:

(“Keynesian OBR” above refers to reforms to the government-run budgetary watchdog, but ignore that for now.) In short, Labour’s rule is an attempt to think seriously about economics and political rhetoric. Canada’s NDP, both federally and across many provinces, has been happy to take on the fiscal responsibility language of the right in a very shallow way: simply repeating it while trying to add small commitments to raising taxes.

The major difference between Mulcair’s transparent attempt to co-opt the right’s rhetoric and Corbyn’s proposal is the transformative potential. While introducing this fiscal rule, McDonnell has also talked about taking privatized industries like rail transport and the post office back under public ownership and control. He has also mentioned transforming the economy towards different forms of social ownership, including everything from state enterprises to worker-run co-ops. Similarly, Labour’s rule means that new social spending will have to be financed out of higher taxes. This is an explicit argument that puts distribution and redistribution back into the center of fiscal policy. It is also one the NDP has not been ready to make in full force in recent years.

At the same time, the left of Labour has been more open about its program as one that still seeks to “save capitalism from itself.” Even elites recognize that the system is mired in stagnation and increasingly reliant on a redistribution of meager growth upwards. Stagnation is thus the reason for excluding public infrastructure investment from deficits. Labour’s rule implicitly sees it as the source of long-term growth. A similar motivation underpins including a falling debt-to-GDP ratio in its rule. The aim is to use public investment to grow the economy faster than the debt.

Remember here that the old man didn’t have much good to say about the public debt:

In so far as we have hitherto considered the peculiar form of accumulation of money-capital and of money wealth in general, it has resolved itself into an accumulation of claims of ownership upon labour. The accumulation of the capital of the national debt has been revealed to mean merely an increase in a class of state creditors, who have the privilege of a firm claim upon a certain portion of the tax revenue. By means of these facts, whereby even an accumulation of debts may appear as an accumulation of capital, the height of distortion taking place in the credit system becomes apparent.

Of course, Labour’s new rule may still be too rigid for small open economies like the UK or Canada in an era of globalization: public debt is not independent of private debt and the current account. And public debt under social democracy can have different redistributive consequences than in Marx’s time. But even if this passage from Marx doesn’t fully encompass the politics and economics of today’s advanced capitalism, it points to the fact that there are class dynamics underneath public borrowing.

The broader question is how the fruits of growth are distributed and whether growth can be channelled towards transformation of economic institutions in the way McDonnell hopes. In the best case, this rule may be part of a “serious social democratic program with socialist characteristics.” Whether this is truly the best strategy is an open question but at least it is made explicit. Without broad working class movements like those that existed in the late 19th century, the 1920s and 30s or the 1960s, one of the primary tasks is rebuilding such a movement and raising expectations in the short term.

Together, arguments about transforming institutions and taxing to spend show how, in the best case, Labour’s rule can be “a framework for a program” as Mason contends, and a left program at that. Both arguments introduce some aspect of class back into the debate over economic policy.

Labour’s policy isn’t perfect, surely, but the point in such exercises shouldn’t be to find a perfect policy. The left should be pushing along expectations and ideas, even in a time when expectations are low and everyday ideology is dominated by the right. Labour’s new rule concedes some rhetoric to the right but, used correctly, can open significant space on the left. It has lessons for both social democrats and the left in Canada.

One reply on “Fiscal policy for the left, or Corbyn vs Mulcair on deficits”

[…] term, but it isn’t just about how much spending will be created. The really crucial thing is what kind of spending. Since the 1990s, the Liberals across the country have been masters at implementing a […]