There was some pretty confused stuff on universality and means-testing during last night’s NDP leadership debate. Here are some thoughts that might help clear things up.

First, Singh’s attack of Caron on means-testing early in the debate was a bit bizarre seeing as both of them have major new means-tested transfers among their policy planks. Caron did a good job in fighting back and hit back at Singh’s move to fold near-universal OAS into a more aggressively targeted benefit. Not a very enlightening exchange.

Not to be outdone, Angus’s attack on Singh at the end of the debate was even more confused. This time, Singh did a good job of defending himself and made a clear argument on the differences between means-tested cash transfers versus universal social programs.

On OAS in particular, Singh is right: not everyone receives it because claw-backs start at $75,000 in income and the benefit is gone for those making roughly $120,000. But Caron is right in that a vast majority of income earners ($120,000 in income lines up with the top 5% of overall tax filers) will get some benefit from the program so it is de facto universal. This makes OAS very different from things like GIS for seniors or WITB for low-wage workers, which phase out much quicker and are targeted at low income folks.

The problem of middle income seniors falling behind is an important one and tied up in so much else about the economy (the decline of unions and pensions; the housing bubble where some have won the lottery and others have not; and so on). The NDP does have to think about what combination of new social programs (pharmacare in particular because it disproportionately helps seniors), expanded public pensions and income transfers will do most to improve people’s lives, and also be a foundation to build on politically—in terms of policy staying power and building winning electoral coalitions. 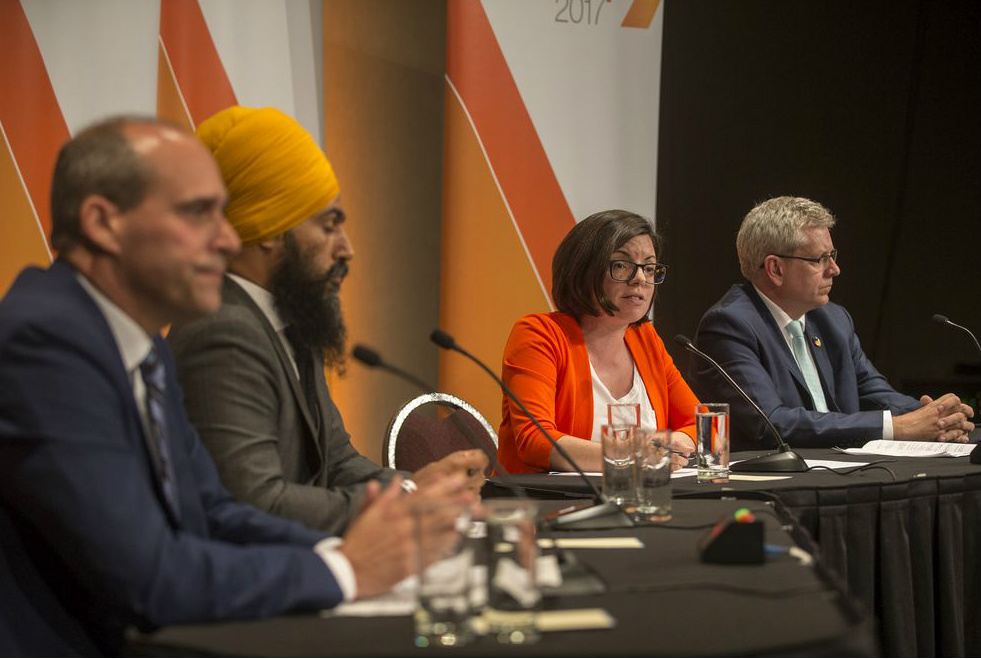 More abstractly, Singh argued that means-testing is redistribution, which is correct and was oddly attacked by Angus. Just how redistributive it is will depend both on how targeted transfers are (funds going out) and how progressive taxation is (funds coming in). However, in overdoing the means-testing versus universality distinction, it is easy to forget that universal services also redistribute income and wealth. In this case, cash from progressive taxes is not moved around between people but pays for the direct provision of goods and services that benefit all.

Implicit in Singh’s argument is the point that social democrats and socialists have always supported cash transfers of some kind, at least temporarily, because poverty in our market economy is in essence a lack of sufficient cash. This is very true. On the other hand, the firewall between social programs and cash transfers becomes flimsier if tilted too strongly to the side of only alleviating the lack of cash. In that case, for each program one can ask, “why wouldn’t we just hand out cash or vouchers and let everyone pay for it themselves?” Indeed, this is exactly what the right has been doing. Social democrats and socialists distinguish themselves by seeing universal services as a path to broader economic transformations where decommodification, taking things off the market and providing them by right, is a good in itself. Universality is also the tool to build those winning political coalitions; public services, once entrenched, are readily defended by big majorities and much harder to claw away at.

All this raises some bigger questions for the NDP leadership debate:

I wrote a piece on the tension between universality and means-testing in light of the federal NDP’s universal childcare proposals floated in 2014. This gets at the crux of what is at stake in the debate:

Overall, the experience of 20th-century welfare states shows that public services have a far greater chance of sustaining broad popular support if they are universal and funded enough to achieve high quality. Otherwise, as Petter Nilsson writes in relation to Sweden’s threatened welfare state, they become a “‘fall back alternative in a dull grey color’ and the system collapses.” A strong universal service today would necessitate a wide coalition of the middle and working classes, ready to tolerate some inequities to accomplish a broader, long-term political goal…

Transfers and tax measures have their place, but they are not in themselves transformative of the conditions that generate inequality. So Quebec, for example, has a tax refund for those who do not use subsidized childcare that is slowly clawed back with higher incomes, but this is on top of a universal program…

Altogether, any struggle for a universal program in the present is bound to be contradictory. The challenge that the growth in inequality poses for motivating and implementing universal programs is a symptom of something deeper. The lopsided recovery from the financial crisis is but a scene in the ongoing restructuring of the Canadian economy — one featuring uneven development in commodity extraction and real estate, benefitting not only business and the wealthy, but also sections of Canada’s working and middle classes, which makes broad coalition-building harder.

Yet if we reflect on ideals beyond these difficulties, then we will find plenty that can underpin universal public programs. Here are just two: increasing democratic control over important social services and moving aspects of life outside for-profit market logic.

That such arguments are largely absent from public debate is another measure of the conscribed political space today. But within that space, the NDP proposal has sharpened the debate. It has irritated all the right people and should be pushed forward. We need all the breathing room we can get.

One reply on “Confused about universality? So are NDP leadership candidates”

Thank you for your commentary on the means test vs universality issues. I note that your spent much of your time on the three male leadership candidates and only mentioned Niki Ashton in passing with regard to the really big questions: “…The big one: how do we change the conditions that create poverty in first place? (Only Ashton really explicitly touched on this)”.

Maybe you could expand on Niki Ashton’s position on ‘The big one’ in your next posting?