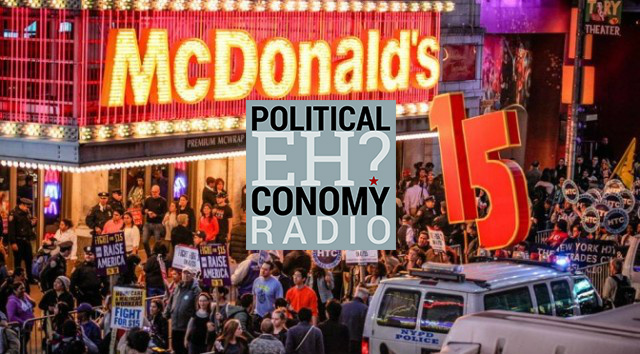 The Toronto Star just published an article I wrote in response to claims made by the Fraser Institute and the Toronto Sun that Ontario has a runaway debt problem worse than California’s.

The short version: I call BS. The slightly longer version: California has constraints, such as limits on the size of debt and difficulties in raising new taxes, that have severely hampered its ability to take on and manage debt. It has a smaller debt than Ontario on all measures but much worse credit standing. Ontario, on the other hand, still has a lot of flexibility to deal with debt. The “solutions” proposed along the Fraser Institute’s alarmism actually seek to create similar, harmful constraints in Ontario. “There is no alternative” becomes true only if we allow alternatives to be removed.

The scrappy mom-and-pop shop may be a nice image, but how well does it reflect the reality of employment? Small business may be neither as ubiquitous nor economically heroic as many people think. If this is the case, then perhaps the needs of small business should not figure as prominently in some economic policy debates. The minimum wage debate is a case in point.

END_OF_DOCUMENT_TOKEN_TO_BE_REPLACED

Discussion of the minimum wage can easily slide into a technocratic back-and-forth that ignores the vital political aspect at play. We can see this in much of the response to the report just released by the Ontario government’s Minimum Wage Advisory Panel (MWAP). Andrew Coyne, for example, once again argues that a basic income is a better solution to poverty than increases in the minimum wage. The question, however, should not be one of which single tool is best for fighting poverty, but how we can build the most effective toolkit, one that also puts political power into the hands of the poor. Poverty is multi-faceted and, while low-wage work is only one potential aspect of being poor, the minimum wage has effects beyond providing much-needed higher incomes.