We’re one year into Justin Trudeau’s government of #RealChange, yet it’s mostly the rhetoric not the policies that have changed. Some of the shine is finally wearing off. Whether approving pipelines, settting electoral reform up to fail or privatizing airports and transit, the Liberals are showing themselves to be the good capitalist managers they’ve always been, not the anti-austerity crusaders of the last election campaign.

Today, three guests—Derrick O’Keefe, Clayton Thomas-Müller and Luke Savage—take a look back at this first year of the Liberal government and look forward to how opposition to it can develop. Derrick is a journalist, author and editor at Ricochet Media. He’s based in Vancouver and currently working on a book on BC politics and history. Clayton Thomas Muller is a climate campaigner with 350.org based in Winnipeg. Luke Savage works for the Broadbent Institute at its Press Progress media outfit and writes frequently on US and Canadian politics.

All the best to you and yours! Back in the New Year! 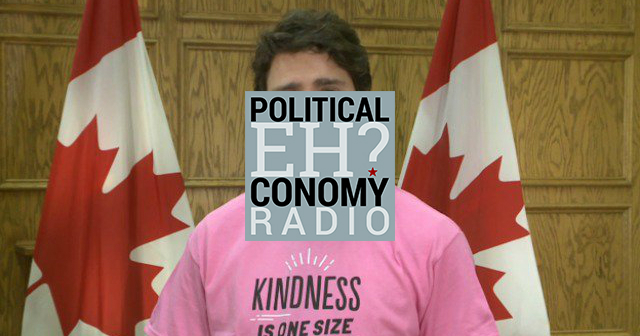 Recycling is supposed to be a good thing, so when the federal Liberals quietly announced that “asset recycling” would be part of their strategy for meeting their much-ballyhooed infrastructure promises, not many eyebrows were raised. They should have been. Asset recycling is an obscure code word for selling our public goods for private profit. It’s privatization by another name.

Don’t have the taxes to pay for new buses? It’s okay, you can sell your electricity utility to pay for them instead. In fact, this is precisely what the Ontario Liberal government is doing. Already 30% of the profitable Hydro One have been sold and another 30% will be sold before 2018. A public Hydro One could more directly fight climate change, lower energy costs for the poor or work with First Nations on whose lands generation often happens. A private Hydro becomes an instrument for profit first with other goals secondary.

What the Liberals have started in Ontario will soon be rolled out across Canada. Here are the problems with these schemes.